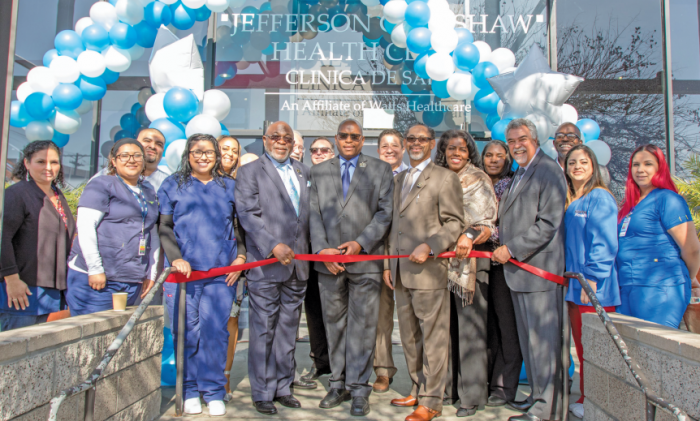 “We want people in the community to know we are here,” said Bryant Crook community health promoter who has been with Watts Healthcare since 2005. “This facility is somewhat mirroring what we have at the Watts Center by providing adult medicine, pediatrics care as well as dental care.”

The Sentinel caught up with Dr. Oliver Brooks who has been with the Watts Healthcare Foundation since 1989. He was appointed Medical Director October 16, 2016, and previously served as associate medical director, chief of Pediatrics and is the medical director for the Jordan and Locke School-based Wellness Centers.

Brooks is also chairman of the quality management committee. We spoke with Dr. Brooks to find out why the Crenshaw area was chosen for the site location. “This vision of the Watts Healthcare Corporation is to provide quality healthcare services to the underserved. We noticed in the zip codes in and around the Crenshaw-Jefferson area (90018), there was a large population of people who were determined to have medical care”, stated Dr. Brooks.

With the recent undermining of the Trump Administration to the Affordable Care Act, we asked him just how Obamacare works as assistance to organizations like the Watts Healthcare foundation, he stated, “With the expansion of Medi-Cal, more people have health insurance which allows us to care for them in a more efficient manner.”

Dr. Brooks continued to inform us of the following: “Right now Medi-Cal expansion is still in place in California and throughout the country, as a matter of fact, the present administration in Washington has determined that they want to eliminate many of the provisions of the Affordable Care Act, one of which would be the subsidizing of payments to Medi-Cal from the Federal government.”  He continued, “Even with that elimination, our hope is that the state of California would continue to provide that particular subsidy. That being stated, any attack on the Affordable Care Act is a potential reduction in coverage for people with Medi-Cal. So we are very concerned with the attack on Obamacare.”

On a state level, Governor Jerry Brown recently released his budget for the State of California and we asked Dr. Brooks his thoughts on the state allocation for healthcare. He stated, “Governor Brown’s budget essentially keeps intact everything that is now in place and there was actually an expansion of dental which is called Denti-cal.  So, we are overall pleased with budget from Governor Brown. There is some potential reduction for pharmacy benefits. That concerns us some; other than that we are overall comfortable with the 2018 Budget proposed by the governor.”

In closing, Dr. Brooks stated, “We need to be clear that the Affordable Care Act, although it had some flaws, was the greatest improvement in the structure of healthcare in this country since the passage of Medi-care in 1965. It is imperative that everyone understand we continue to support the Affordable Healthcare Act.” He continued, “From a local perspective, we are fortunate to have supervisors and state legislators who understand the importance of healthcare and continue to provide funding and legislation that supports those in need of care.”