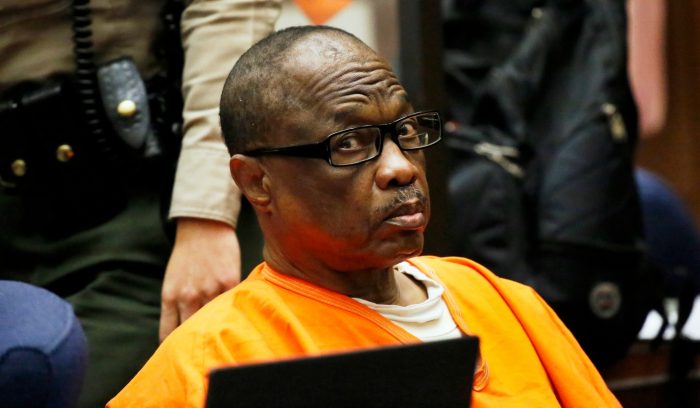 On the day Enietra Washington was shot and left for dead three decades ago, she looked her assailant in the eye and told him she would haunt him if she died.

Washington survived, but she still got her revenge.

As one of the rare survivors of the “Grim Sleeper” serial killer, Washington’s testimony helped prove the case that sent Lonnie Franklin Jr. to death row Wednesday for the murders of nine women and one teenage girl.

With Franklin shackled and in orange jail scrubs with his back to her, Washington addressed him from the gallery, saying she had lived in fear since the 1988 attack and that he didn’t deserve forgiveness because he showed no remorse. 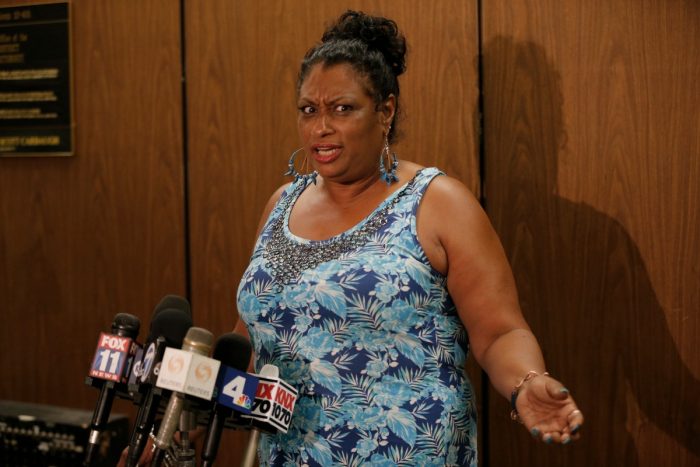 “You are truly a piece of evil,” Washington said. “You’re right up there with Manson.”

Franklin, 63, was convicted in a string of killings from 1985 to 2007 in a Los Angeles neighborhood ravaged by the crack cocaine epidemic. Some residents complained police didn’t thoroughly investigate the slayings because the victims were young, black and poor and many were drug users and prostitutes.

Franklin avoided suspicion for decades, working as a city trash collector and pumping gas for Los Angeles police before collecting a pension because of a work injury.

His gunshot and strangling victims were found dumped in seedy alleys, wrapped in carpets or hidden under discarded mattresses.

His final victim, Janecia Peters, was found by someone rooting through a dumpster who noticed her red fingernail.

Peters’ mother was one of more than a dozen bereft family members who spoke in court, telling about how their lives were altered and questioning how someone could be so cruel and callous.

“The defendant took my daughter, murdered her, put her in a plastic bag … like she was trash,” Laverne Peters said. “My hope is that he spends the rest of his glory days in his jail cell, which will become his trash bag.”

Franklin was linked to 14 slayings, including four women he wasn’t charged with killing.

The killer was dubbed the “Grim Sleeper” because police originally thought there was gap in slayings from 1988 to 2002. They now say they don’t think he rested and could have left up to 25 victims behind.

Franklin denied any role in the killings to investigators, but didn’t utter a word in his defense at trial. His attorneys tried to cast doubt on ballistics and DNA evidence and suggested a mystery man was the culprit.

In rejecting a defense motion to set the death penalty aside, the judge noted they had presented almost no evidence in favor of sparing his life, such as testimony about good deeds or a troubled upbringing. 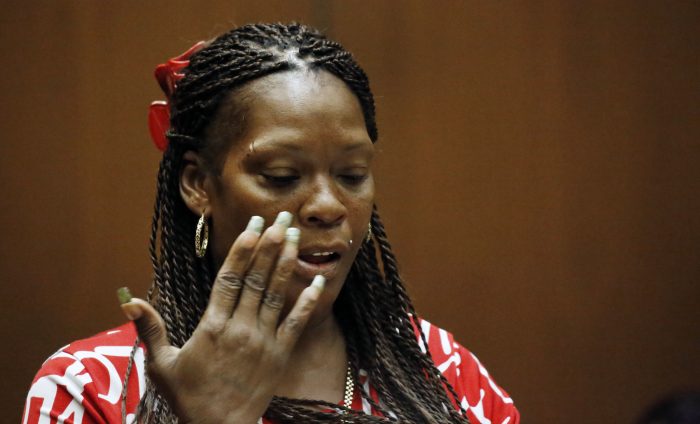 Laura Moore, speaks to Lonnie Franklin Jr. as she recalls being shot six times by him on May 5, 1984 during victims impact statements before he was sentenced in Los Angeles Superior Court Wednesday, Aug. 10, 2016. Franklin was sentenced to death for the murders of nine women and a teenage girl that went unsolved for years as the body count grew in a poor section of Los Angeles haunted by the scourge of crack cocaine. (Al Seib/Los Angeles Times via AP, Pool)

“I can’t think of anyone I’ve encountered in all my years in the criminal justice system that has committed the monstrous crimes that you have,” Judge Kathleen Kennedy said.

Franklin, who showed no emotion during trial, stared straight ahead for most of the hearing. He turned twice when victim’s loved ones told him to look at them. He snapped at the sister of a victim who said he knew her.

Williams, the sister of victim Georgia Mae Thomas, said she forgave Franklin because that’s what the Bible teaches.

“You’ve done some horrible things,” she said. “You’ve walked into this room and … looked straight ahead like you think you’re God.”

Franklin was connected to the crimes after a task force re-examining the old cases discovered that genetic evidence on one of the victims was similar to his son’s DNA, which was in a database because of an arrest.

Franklin’s own DNA was surreptitiously collected by a detective posing as a busboy who collected pizza crusts he had discarded and utensils he used at a birthday party. He was arrested when results connected him to the crimes.

In his house, police found a gun used in killings and Polaroids of some victims, including one of Washington in which she was partly topless and bleeding from her gunshot wound.

Washington had told investigators that she remembered seeing the flash bulb as she was losing consciousness.

She said she’ll rest easier knowing he can’t harm anyone.

“It’s a good thing that we’re able to put him away,” she said. “He doesn’t get to see the light of day no more.”

As Franklin was led out of the courtroom, family members of the victims began clapping.