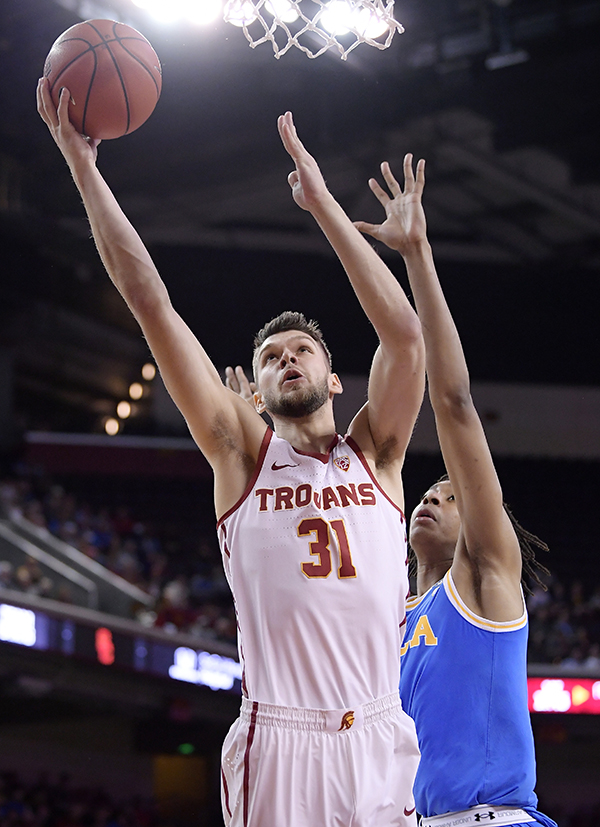 The USC men’s basketball team protected home court on Saturday, Jan. 19, at Galen Center with a resounding 80-67 win over UCLA that snapped a four game losing streak to the Trojans’ crosstown rival.

“We are enthusiastic about the improvement that our team has made, but we also know that our margin of error with the lack of depth and some of the issues we’ve had is very, very small,” commented USC coach Andy Enfield.

In the first five minutes of the contest, the Trojans extended their lead to a 12-point advantage over the Bruins 16-4. That run was followed by six unanswered points sparked by UCLA’s Cody Riley though the Trojans still maintained a 16-10 lead.

“It was important for us to get off to a good start, but they came back and we knew that,” stated Enfield. “We knew they were going to put up a fight.”

Kris Wilkes sunk a three-pointer with 7:18 left in the first half to give UCLA their first lead of the game, 23-22. That ignited a 19-6 run for UCLA as USC struggled to find a rhythm from three-point. The Trojans shot 5-of-16 from three after missing nine of the team’s last 10 attempts to close the first half.

The Bruins cut the deficit to three points by halftime, as the Trojans were up 36-33. Out of the half, Moses Brown hit a shot in the paint for the Bruins that closed the gap and the score was tied 38 all.

From there, it was all USC. The Trojans led by as much as 26 points in the game. Senior forward Bennie Boatwright and sophomore forward Nick Rakocevic exchanged baskets to put the Trojans on a 22-4 run with 11 minutes left in the game. Rakocevic led the Trojans with a double-double,  21 points and 12 rebounds that  included eight of the Trojans’ nine offensive rebounds.

“He anticipates very well,” praised Enfield. “He has long arms, you see him tip the ball a lot even if he can’t grab it. He just has a knack and that’s a skill. You look at the best offensive rebounders in college and in the NBA, it’s hard to teach that.”

“I came in late into the season, so it took me a while to get out and get comfortable out there,” reflected Boatwright. “I’m feeling a lot better. I don’t think people understand how tough it is coming back from injury. When you don’t play basketball for a long time, it’s tough to get a rhythm.”

Boatwright was pleased with the team’s effort in his final home game against UCLA. The spirited USC band and student section chanted, “Hurry up and lose” throughout the final minutes of the game.

“Coach [Enfield] makes an emphasis like we haven’t beaten them the last four tries since my freshman year so that holds weight,” said Jonah Matthews, who added 16 points and five assists. “We were just like they can’t come to USC and beat us so we just took it to them and it was personal for all of us.”

It was even more special considering last year’s 83-72 loss at Galen Center that was likely the determinant in keeping the Trojans from making the NCAA Tournament. USC’s effort and energy was apparent. The team played a complete game as they forced 20 UCLA turnovers.

The Trojans also won in the assists column dishing the ball double the amount of the Bruins, 26-13. Shaqquan Aaron and Derryck Thornton combined for 13 of USC’s assists. USC improved to 10-0 when recording 16 or more assists this season.

“It takes a group effort because we don’t have tons of one-on-one players who can just put their heads down, get in the lane and make a shot,” stated Enfield. “We need to play together as a team and execute the spacing and our movement and today our players did a very good job of that.”

USC is still shorthanded with the departure of Jordan Usher earlier this year and without the team’s highly touted freshman guard Kevin Porter Jr. (suspension). Enfield stated there is no timetable for Porter Jr.’s return and that he would be re-evaluated later in the week.

The battle for L.A. will remain in favor of the Trojans until the team visits Pauley Pavilion on Feb. 28.