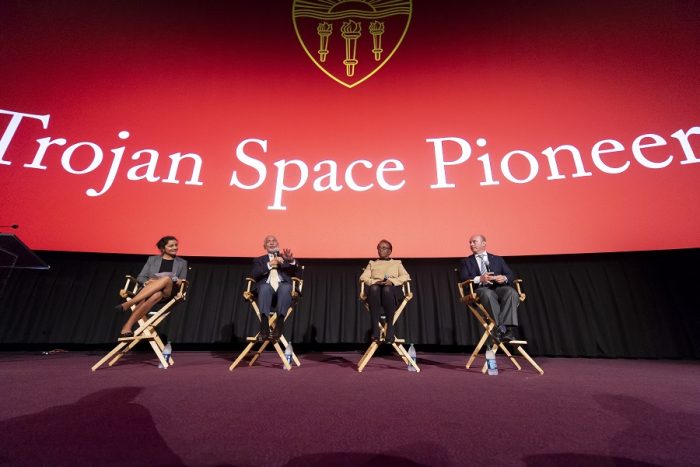 USC hosted students from the Neighborhood Academic Initiative (N.A.I.), one of the university’s community programs, for a panel on pioneers in space exploration and research followed by a private film screening of “First Man,” on Friday, Oct. 5 in downtown Los Angeles.

“I hope that it reinforces for the [students], the importance of a STEM education in the sciences, technology, engineering and math, which will allow them to pursue their dreams and aim high,” stated USC interim President and former president and CEO of the Aerospace Corporation, Dr. Wanda Austin.

Austin was joined on the “Trojan Space Pioneers” panel by Charles Bolden, a former NASA Administrator, Garrett Reisman, director of space operations at SpaceX and rocket scientist and aerospace engineer Anita Sengupta who served as the panel’s moderator. The panelists discussed riveting topics surrounding personal interactions with Neil Armstrong, the landscape of space research and their personal accomplishments in the industry.

Each panelists had a commonality beyond their extensive experience in the aerospace engineering field, all earned degrees from USC. Armstrong who was the first man on the moon, was completing his graduate degree in the astronautical engineering program in the USC Viterbi School of Engineering during the time depicted in the movie, “First Man.”

USC’s Viterbi School of Engineering currently leads among colleges in recruiting women in engineering with women accounting for 45 percent of incoming USC freshmen majoring in engineering—twice the national average.

Growing up as a young adolescent in the Bronx, New York, Dr. Austin had never heard of NASA research mathematician Katherine Johnson whose contributions to space were depicted in the film “Hidden Figures.” In 2015, former President Barack Obama awarded Johnson with the U.S. Presidential Medal of Freedom. 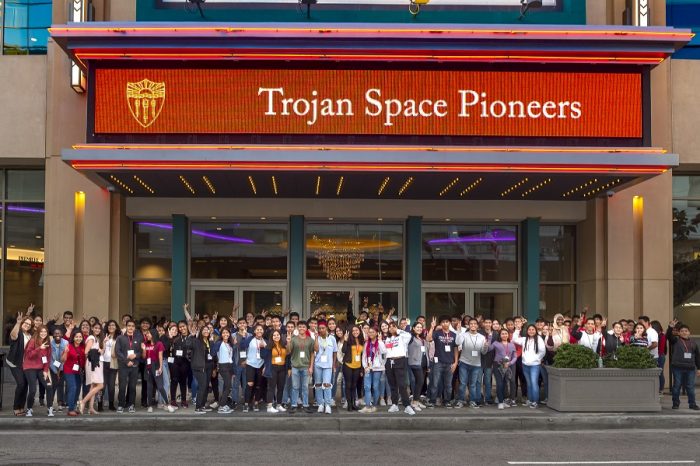 Students from USC’s Neighborhood Academic Initiative posed for a photo before the screening of the movie “First Man” at the Regal Cinemas L.A. Live 14 in Downtown Los Angeles, Calif.
Photo by Gus Ruelas/USC

“One of the important things that we have to do is make sure that young women very early in their careers are exposed to the fact that there are women doing amazing things in science and technology,” emphasized Austin.

It is this exact philosophy that led N.A.I. and Foshay Learning Center alumnus Sierra Williams to earn her B.A. in industrial and systems engineering from Viterbi. Williams sees Dr. Austin’s accomplishments as a source of inspiration.

“Just being first-generation, low-income, and a minority student in all of its entirety I feel like it makes your story and what you’re going for, the reason behind what you’re doing, more powerful,” started Williams, who is currently obtaining her master’s degree in operations research engineering from USC. “Being able to say that I’m here I’m a graduate student at USC and I have the same degree as the interim president is amazing because there’s no one that I really know that’s had that position that I’m aiming for and so being the first in my family is really important.”

Williams hopes to carry the torch set forth by pioneers like Johnson and Dr. Austin. Though there is a competitive number of female students, the number of enrolled Black students in the Viterbi School is still severely lacking.

“Right now there are only approximately 50 Black students in the Viterbi School overall,” according to Williams.

“We work really hard to bring about diversity in the field,” said Bolden, whose career spans 34 years with the Marine Corps and 14 years as a member of NASA’s Astronaut Office. Bolden also serves as a USC Trustee. He traveled to orbit four times aboard the space shuttle between 1986 and 1994. 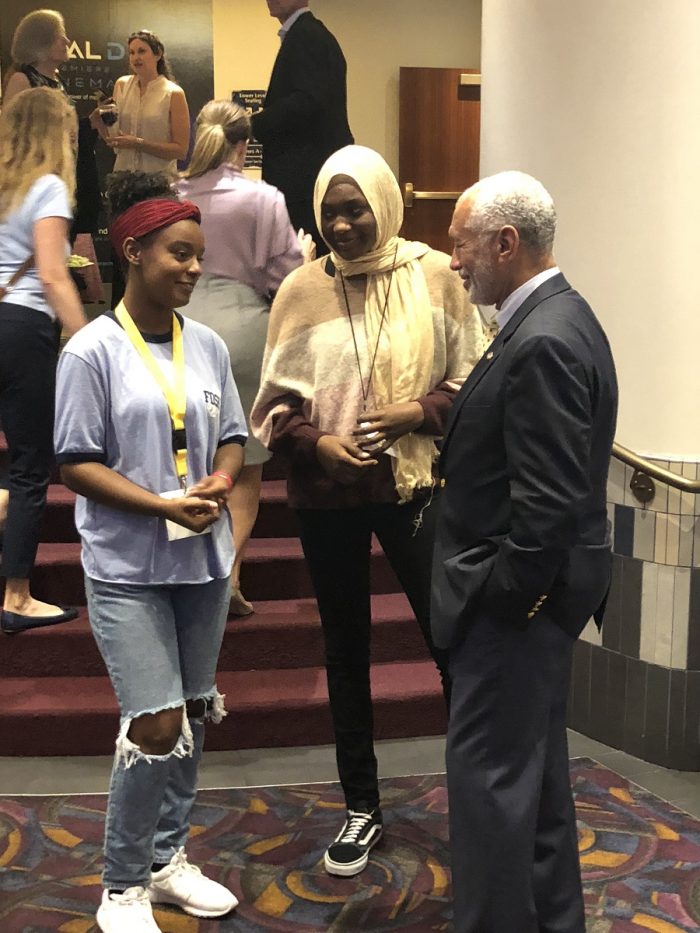 Charles Bolden speaks to a pair of USC’s Neighborhood Academic Initiative students ahead of the “First Man” screening at the Regal Cinemas L.A. Live 14 in Downtown Los Angeles, Calif.
Photo by Lauren A. Jones/L.A. Sentinel

It was not until Bolden’s mentor, Dr. Ron McNair who was an African American physicist and NASA astronaut, encouraged him to apply for a specialized program that Bolden even considered being an astronaut.

“I never dreamed of going to space,” Bolden remarked. “There’s still glass ceilings and that’s the disappointing part. We still have a lot of work to do.”

It is the precise reason, USC has focused its efforts into ensuring students from public schools like Foshay Learning Center have resources to explore their interests in STEM. Sulara Merghani is a junior at Foshay and enrolled in the N.A.I.

“From the NAI program, I’ve gotten motivation,” described Merghani. “I’ve learned to be determined, to go for what I want, to have a dream and go for my dream.

Following the panel, students were provided with an exclusive screening of the new movie “First Man,” the story of Neil Armstrong’s journey being the first man to land on the moon. The biographical drama directed by Damien Chazelle, starring Ryan Gosling is based on the book “First Man: The Life of Neil A. Armstrong” that was written by James R. Hansen.

“I’m in the health academy at school and we read about life in space and all the struggles of being in space and what the astronauts have to go through, so coming to see the movie with my fellow health academy students it’s like we learned about this and now we’re going to come and see it for the first time, I’m looking forward to it,” commented Merghani.

“One small step for man, one giant leap for mankind,” Neil Armstrong once stated.
Pioneers like Johnson, McNair, Austin, Bolden, and Armstrong have chartered the path for the next generation of space pioneers.