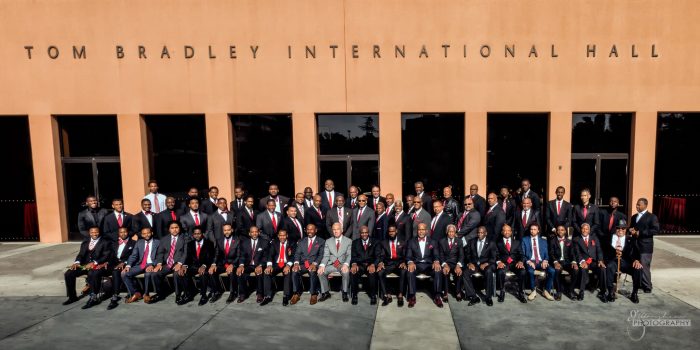 Angeles Mayor Eric Garcetti to both Judge Gonzalo P. Curiel and Undergraduate UCLA Chapter Polemarch (President), Erick Jackson. The Western Province Council of Kappa Alpha Psi Fraternity also recognized the achievements of the Upsilon Chapter with a Resolution from Western Province Polemarch Gilbert D. Brown III. The Anniverary Chairman Kevin D. Kinsey, in his opening remarks spoke of the great history of Upsilon Chapter beginnings and what an achievement is was in having the events on the campus of UCLA.

He said “We are blessed to have this wonderful occasion in a building dedicated to our 18th Grand Polemarch, wearer of the fraternity highest award, the Laurel Wreath and five-time Mayor of Los Angeles, Tom Bradley.” Other highlights included Judge Gonzalo P. Curiel remarks as to the great accomplishments and journey of achievement that noted members of the Upsilon chapter have demonstrated over the years particulary by their contribution to the communities from which they came and the world for which they have impacted considerable success in the objectives of commitment to the aims and purpose of achievement.

Chancellor Block’s statement that the university would be celebrating it’s 100 year centennial and added how important it was that the members of Kappa Alpha Psi having been established only four years later has helped to provide  distinguished leadership, unparalleled accomplishments and diversiy to the UCLA community and to society. The Annivesary Committee members were Kevin D. Kinsey,  Chairman, Paul A. Amos Sr. Co-Chairman, Erick Jackson Co-Chairman, Gerald Ossey, Jeff Lillie, Jarrell Davis, Shelby Middleton, and Kevin G. Harbour.