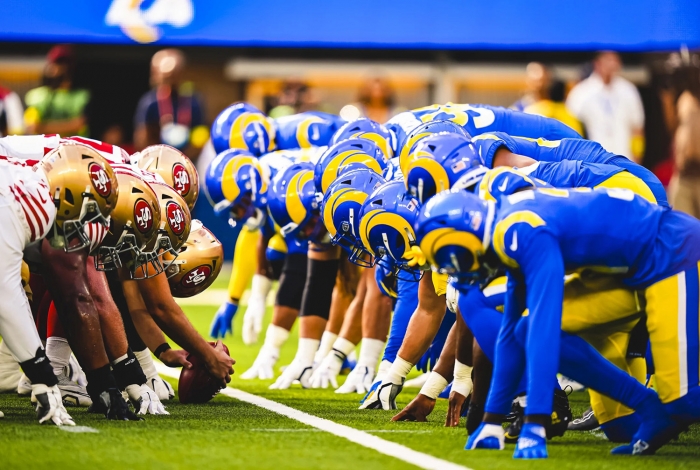 The day began with a balmy temperature of 75 degrees, the fantastic rendition of the National Anthem by independent artist George Lovett and the presentation of colors by the American Legion Auxiliary Jackie Robinson Unit 252.

This game reminded me of the old-school lyrics of the Cameo song Back and Forth, as the first-half scoring went back and forth until it didn’t. The San Francisco 49ers defeated the Rams at SoFi Stadium, 31–14. The last time the 49ers lost a regular season game to the Rams was December 30, 2018. 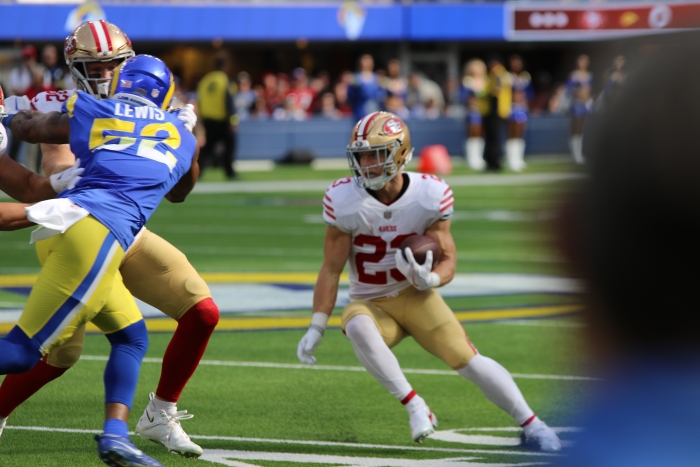 49er Christian McCaffrey is first player since 2005 to run, catch, and throw touchdowns in the same game.
(Credit: Gregory Redding)

Matt Gay’s extra point kick was good, Rams 7-0. The fans immediately began their expected chant of whose house, Ram’s house, amid a stadium filled with red jerseys from the north.

The 49ers responded with a halfback option pass from newly acquired running back Christian McCaffrey to a wide-open Brandon Aiyuk for a 34-yard touchdown pass. And yes- McCaffrey showed the Rams he could run, catch, AND throw. 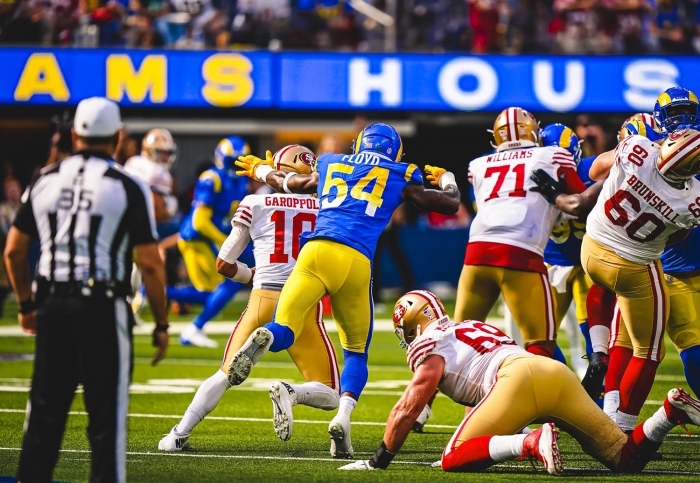 Maybe the Rams should have upped their bid to get him from the Carolina Panthers – not to pour salt in the wound. The Rams would move the ball 75 yards and nine plays culminating in a pass from Stafford to wideout Cooper Kupp, 16-yards in the back of the end zone, extra point good: Rams,14-7. 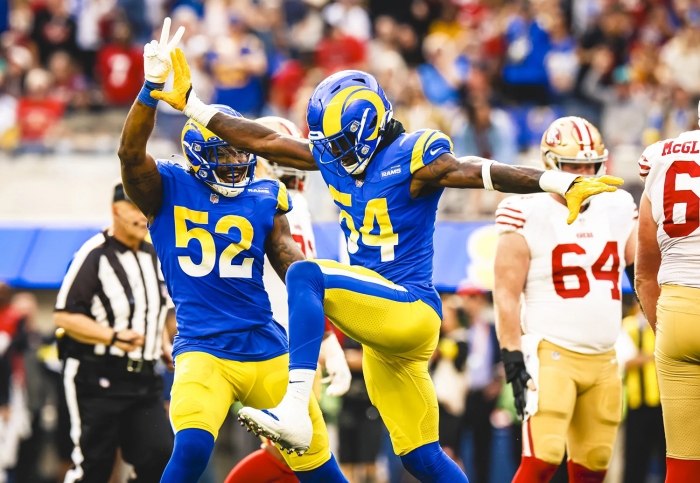 On a side note, Rams cornerback Jalen Ramsey and Niners kicker Robbie Gould were separated by officials before the half ended, continuing their beef from last season’s NFC Championship game. The Rams were up 14-10 at the end of the first half, but you sensed that the 49ers were done with the back-and-forth scoring and focused on continuing their regular season winning streak against the Rams.

In the third quarter, McCaffrey played like a man on a mission, his ninth full day with the Niners, scoring with a nine-yard touchdown pass (an 11-play, 88-yard drive), giving his team the lead. McCaffrey would follow that touchdown with a one-yard run to put the 49ers ahead by 10 points; a run assisted by a previous 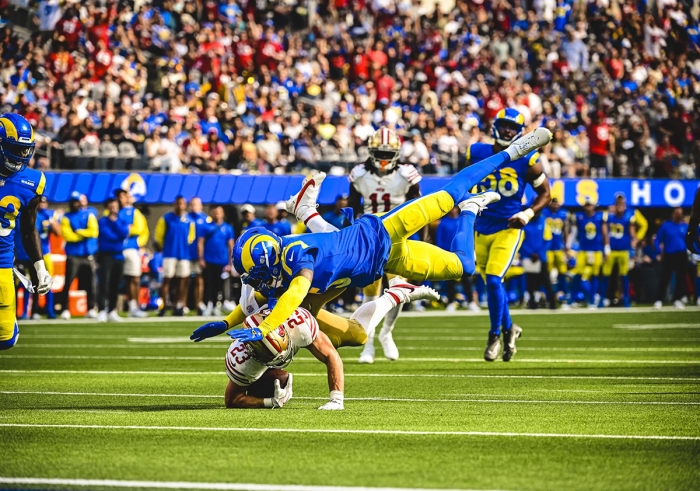 The 49ers put the game out of reach when Garoppolo connected with tight end George Kittle on a seven-yard touchdown pass, five-play, 73-yard drive.

Garoppolo finished the day with 21-of-25 passes for 235 yards and two touchdowns. The 49er’s offense put up 21 unanswered points in the second half. 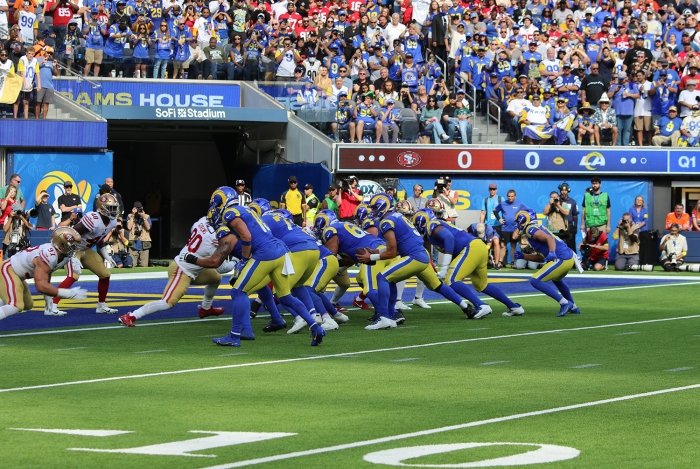 Rams wideout Cooper Kupp would go down late in the fourth quarter while Rams fans held their collective breaths. He would leave the game with an ankle injury. Rams head coach Sean McVay said he was “kicking himself” over keeping Kupp in the game and not running the ball. “I’m hopeful that he’s okay.” Kupp finished the game with 79 receiving yards and a touchdown.

“It just got rolled up a little bit, Kupp told ESPN. “Foot got caught, but I think it was able to slide out of there before there was too much damage done, and so, we’ll see over these next few days how it responds.”

The Rams are now 3-4 in the first eight weeks of the season, placing them in second-to-last place in the NFC West. The Rams travel to meet the Tampa Bay Buccaneers (3-5) next Sunday. 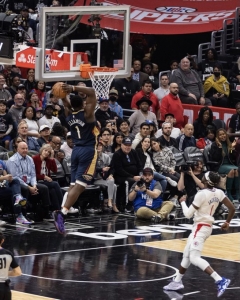 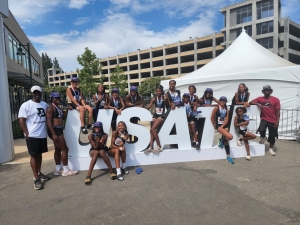 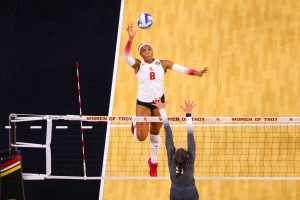 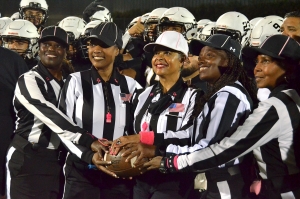 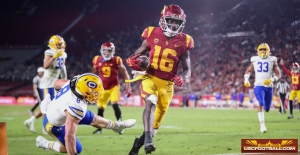