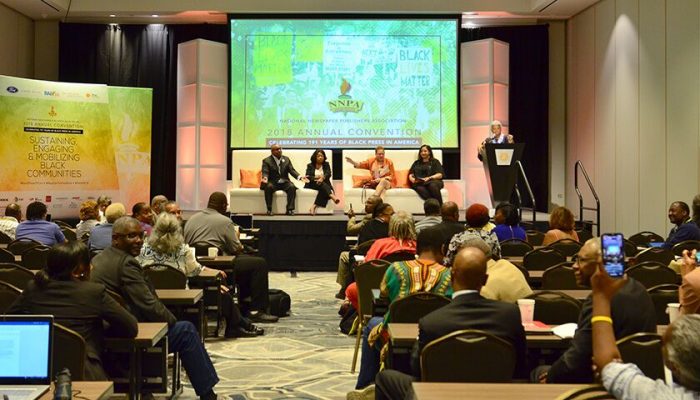 Panelists discuss the affects of “fake news” on the Black community during the NNPA’s 2018 annual convention in Norfolk, Va. (Freddie Allen/AMG/NNPA)

As Donald Trump’s persistent “fake news” rhetoric continues to fester in the media, Black publishers across the nation, recently took charge of the conversation, giving way to a special forum entitled “Black Press vs. Fake News.”

The forum took place during the National Newspaper Publishers Association’s (NNPA) annual convention. Dorothy Leavell, the chairman of NNPA and publisher of the Chicago Crusader, the Gary Crusader and the Chicago Reader, moderated the dialogue about misinformation in mainstream media.

“What do we do in this age of fake news?” Leavell said. “Our struggles and our truths have been at the forefront of battling fake news throughout history.”

Leavell continued: “In 1827, we battled the lie that we were nothing more than three-fifths of a human, spearheaded by the Freedom’s Journal, the nation’s first Black-owned and operated newspaper, which stepped in and showed us different. In 1895, activist Ida B. Wells, who established the ‘Memphis Free Speech’ refuted the fake news of her day—concerning the mythical rape of a White woman.”

Leavell said that, throughout history, Black people have been victimized by the proliferation of fake news and misinformation, including some of our most profound Black leaders like Marcus Garvey, Dr. Martin Luther King Jr., leaders of the Black Panther Party and even today’s Black Lives Matter.

“All these obstacles are nothing new to us,” Leavell said. “So, while Donald Trump has been credited for popularizing the term ‘fake news’ we know this too is ‘fake news.’”

Joining in on the dialogue, additional speakers included Sarah Glover, the president of the National Association of Black Journalists; Deborah Gray-Young, the managing partner of D. Gray-Young, Inc. Consulting; Dr. Julianne Malveaux, an economist and sociopolitical commentator; and A. Scott Bolden, the managing partner of the Washington, D.C., office of the global law firm Reed Smith. The panelists challenged Black publishers and their teams to not only report real stories, but to also report them right.

“I’m not so much concerned about what is being said, as I am with what isn’t,” Malveaux said. “We [Black people] can define what news is…For example, ‘45’ is running around bragging about how low the Black unemployment rate is, but if you research the statistics and labor market correctly, you’ll see that a large number of Black people, have actually left the labor market altogether.”

Malveaux continued: “This is the real story that needs to be told and not 45’s ‘fake news.’ This year alone over 150,000 Black women left the labor market, which represent the stories that nobody is telling.”

According to a report by CNBC, nearly 70 percent of all American citizens are concerned about “fake news” being used as a weapon.

What’s more, in a recent report  by NBC, “fake news” or just overall lies, were shown to spread faster on social media than the actual truth.

Examining the critical role of Black media, which has long been the beacon of light in the Black community, alongside the new age of technology, Deborah Gray-Young, placed emphasis on millennials and their role in escaping the idea of “fake news.”

“Black media is being dismissed and not being regarded for its true worth,” Gray-Young said. “It’s time we take a page out of Donald Trump’s book and reinvigorate our bases. Then we need to take a step back and reestablish trust, particularly among young people. We’re in a time now, where millennials are asking, ‘What’s the source of true information?’ That source is the Black Press and we need to do a better job explaining that.”

Gray-Young continued: “And don’t forget about your social media. This is what young people are plugged into. It’s not just about what’s happening in the present moment anymore. Every time we report something we are participating in the documentation of history, and what comes up in Google searches are items with the highest ratings, which is what the public comes to know to be the whole truth.”

This is why the presence of the Black Press on social media is so pivotal, Gray-Young added.

“Increase your SEO’s, tell your own stories and get plugged in,” Gray-Young said.

Bolden said that in America, right now, “we don’t struggle with the ideals of what is right and what is wrong, but what is the truth.”

Closing out the discussion, Chairman Leavell called on mainstream media and the general public to denounce the idea of “fake news” and its message, while encouraging all Americans to support the Black Press.

“NNPA has served as a vanguard and a honest look into the lives and struggles of Black Americans for over forty years,” Leavell said. “The Black Press has been around for over 191 years. To say that there is no real news or reporting, just isn’t factual as history shows us different.

Leavell continued: “As members of the Black Press it is our job to be that torch of insight and lead other generations on.”