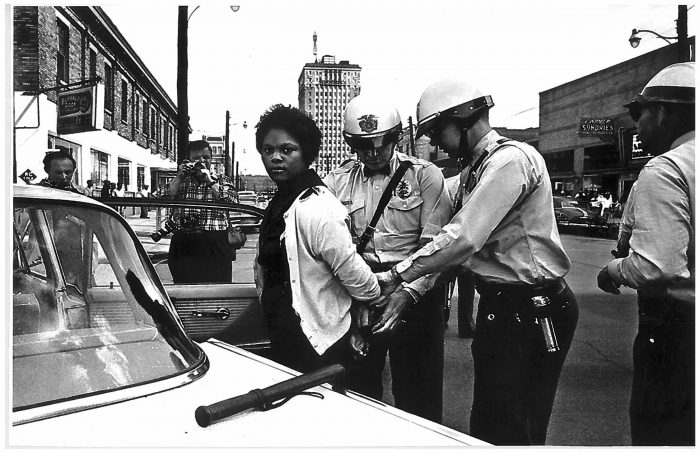 Mattie Howard Harris as a teenager, is arrested by Birmingham Police officers during the 1963 Children’s Crusade (courtesy photo)

In April 1963, Rev. Dr. Martin Luther King Jr., Rev. Ralph Abernathy, Rev. Fred Shuttlesworth, and James Bevel of Southern Christian Leadership Conference (SCLC) along with other members of the SCLC set out to desegregate Birmingham through the use of non-violent acts like protests, marches, and boycotts.

However, their plan backfired resulting in a mass arrest for all the demonstrators who were involved, including Dr. King.

One month later, Rev. Bevel decided to include children in the protest. The plan often referred to as the Children’s Crusade or Children’s March, allowed students to walk out of school and participate in an organized protest.

In May 1963, Parker High School student Harris and other youth began picketing in Birmingham, Alabama in support of desegregation.

During the sixth day of the protest, police officers and firemen headed to the Carver Theatre and began taking away picket signs from students and spraying them with water from the fire hoses. The pressure from the water so powerful that it knocked the students down to the concrete.

Amid the chaos, Harris noticed something that shook her to the core.

“The police officers were sicking the dogs on Jessie and I didn’t like it because they kept on going and the kid was down,” said Harris. 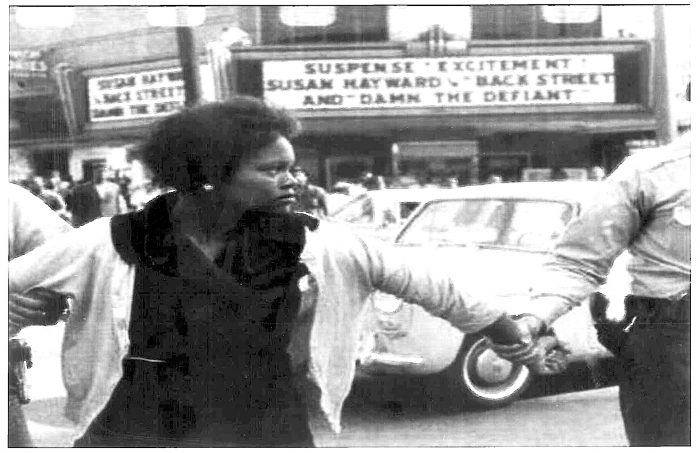 Mattie Howard Harris gets arrested after punching a Birmingham Police officer in the face. (courtesy photo)

Instead of watching the incident, Harris decided to step in and help the young boy.

“I tried to pull him away from the dogs and the police started spraying me with a lot of water. So I grabbed Jessie and I started pulling him back,” she said.

One police officer then began to spray Harris with the fire hose which resulted in a “tussle” between the teenager and one of the officers.

“One police officer, he wasn’t so nice, so I knocked him down with my fist. Another police officer came over to help him and they both grabbed me and we had a tussle. I went from non-violent to violent,” she said.

“One of the older men who was with the lawyers and marchers with Dr. King came to see what was going on and the police officers began to curse at him which made me angry, because he hadn’t done anything but ask a question and that made me more angry.”

According to Harris one of the officers began looking at his “billy club” (baton) to which she replied, “I dare you, hit me with it, hit me with it if you dare.”

The officers then began to handcuff Harris and other students who were protesting and put them in the back of police cars.

“They put so many of us in jail, some of us were in general population, a lot of people were scared. We stayed there for two nights. Then they moved us to different cells,” she said.

Harris and other protesters who were involved in the Children’s Crusade spent eight days in jail with little to no food. Many slept on iron beds with no mattresses and some even slept on the floor.

The attention of the Children’s Crusade began to receive media attention and soon garnered the interest of Attorney General Robert F. Kennedy so much so that he went down to the jail to see firsthand the living conditions of the brave students who were behind bars.

“That day the [officers] put a lot of mattresses in our cells and told us to put them on our beds. I stood on one of the iron beds and said, ‘you better not, don’t you see what’s happening? If you touch those mattress it will just be a shame and you marched for nothing,’” said Harris.

In mid-May 1963, Harris and other protesters who participated in the Children’s Crusade were released from jail on Mother’s Day.

“The only thing that got me through that time were my children. I missed my children,” she said.

Prior to the Children’s Crusade, Harris had always been a young activist advocating for equal rights for African Americans. Because of her bravery and the bravery of other students, the Children’s Crusade led to the creation of civil rights legislation. Today, African American youth across the U.S. are still speaking up against injustices through protests like March for Our Lives and the UTLA teacher strike that took place in earlier this year.