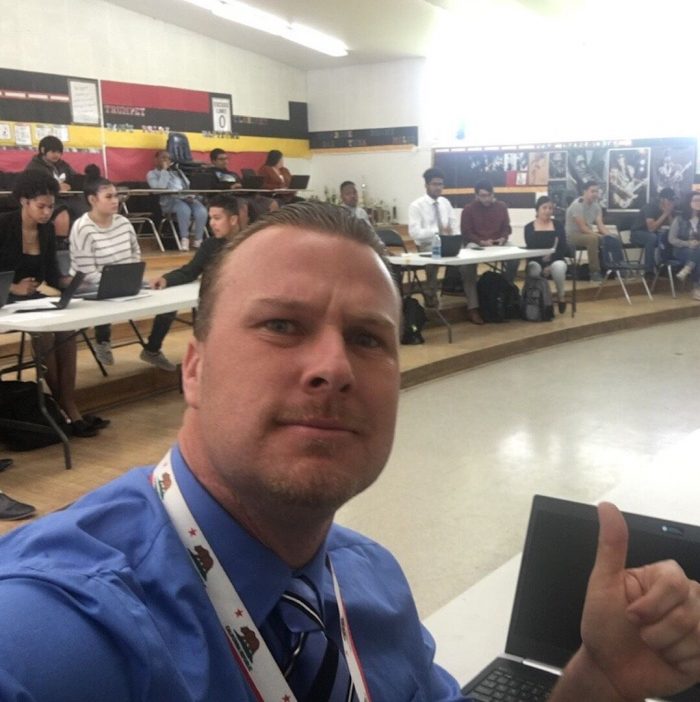 Vincent McLeod giving a thumbs up to students during class. (Courtesy photo)

After a near-fatal attack, Vincent McLeod, a teacher at Compton’s Dominguez High School uses his traumatic experience to help students deal with their experiences. Through STEM education he uses his truth to relate to students and help them naturalize post-traumatic stress disorder  (PTSD).

On March 23, 2009, McLeod was out in Long Beach with his wife and family friends when he was brutally attacked and forced to fight for his life. The gruesome encounter led to multiple surgeries, extended hospital stay, and a coma; followed by a lifetime of PTSD and survivors’ guilt.

He returned to a normal lifestyle once healed, however, the memory continuously took a toll. “I was normal to them, but inside I was completely distraught,” McLeod says touching on how he was received by others after this life-changing event.

Nevertheless, McLeod did not let this stop him. During his recovery, he found that while structural therapy did not ease his PTSD, speaking with military veterans did. He believes being able to speak with people who could relate to his experience helped deal with the painful memory. Through this, he learned to be vulnerable, compassionate and understanding of not only his story, but others. A lesson that has helped shape his role as a teacher.

Currently, the high school government, economics, and business entrepreneurship teacher share his story to relate to students, most of whom deal with traumatic issues in their lives. Despite cultural differences, McLeod who is white reaches students in a way that rises above race. By opening up to his students from the very moment they meet, he creates a space where students feel safe and understood.

“You have to break the stigma to show people that it is acceptable to have PTSD,” he says on how he connects to students. Always ensuring students it’s okay to not have answers, adding “long as you are working towards the goal of making it manageable and better for you.”

McLeod’s classrooms are completely digital and project-based, allowing students to adapt their learning experience with the real world. Creating a system of trust and responsibility, McLeod helps students realize how much control they truly have, strengthening the mind against life’s struggles. 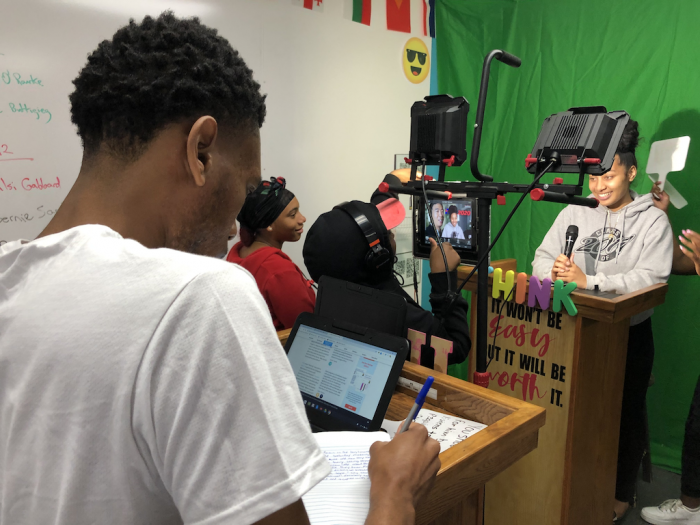 Students working as a group in McLeod’s class. (Courtesy photo)

His students have produced phone applications, gadgets and more to deal with PTSD and mental health. These projects encourage students to talk about their traumas and find healthy methods to cope and bring purpose to their lives. McLeod also gives students the opportunity to pitch these ideas to investors, giving a full hands-on experience of the business entrepreneurship world.

“I really want students to know they have all the learning ability, but they have to take ownership,” he says of what he wants students to conquer. McLeod believes it is time to shift the narrative around learning by having students directing their academic process. “I’m trying to get students to want to come to class, be excited to learn, and gain things,” which he believes projects, responsibility, and honest communication helps keep students focused and motivated.

His students recently participated in Compton’s Unified School District STEAMfest, a student fair for science, technology, engineering, art, and mathematics. Under the banner of The Mission: Impact Challenge – Connected Community, STEAMfest welcomes students in both middle and high school to share projects and knowledge focused on developing solutions to identify trauma and build a community to support and heal.

McLeod fully supports The Mission: Impact Challenge – Connected Community. “If you can destigmatize it now when they [students] are younger, when they become fully developed they don’t have to wrestle with it [PTSD] then, it’s just common knowledge”, adding, “it starts now.”

The Mission: Impact Challenge – Connected Community STEAMfest event was held Thursday, May 23, 2019, at 3:00 PM to 7:00 PM at Dollarhide Community Center. McLeod’s Team of Seniors placed first in the competition, followed by a Team of Juniors which he also worked closely with were the runner up. McLeod states the students are extremely excited about the future developments surrounding their application creations.

You can learn more about Vincent McLeod and his classroom on his website at www.mcleodclass.com.