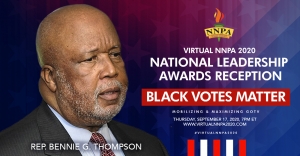 “California is determined to ensure we achieve a complete census count. We’ve started early and are committing more resources than any other state on a robust outreach and engagement effort to reach all Californians,” said Ditas Katague, Director, California Complete Count – Census 2020. “Our collaborative partnerships throughout the state will make a difference in 2020, which may be the most difficult Census count yet for California.” ... read more »
On King Holiday Commemoration: 600 Black Legislators Resolved to Push Policies for Economic Justice Resolution considered new win for Black Wealth 2020

It was three years ago that a group of national business leaders launched a movement called Black Wealth 2020 partially based on the economic vision articulated by Dr. Martin Luther King Jr. King said in his final speech on April 3, 1968: "It's all right to talk about streets flowing with milk and honey, but God has commanded us to be concerned about the slums down here and his children who can't eat three square meals a day. It's all right to talk about the new Jerusalem, but one day, God's preacher must talk about the new New York, the new Atlanta, the new Philadelphia, the new Los Angeles, the new Memphis, Tennessee." ... read more »
ADVERTISEMENT
ADVERTISEMENT
Videos
Kirk Franklin Interview PT3