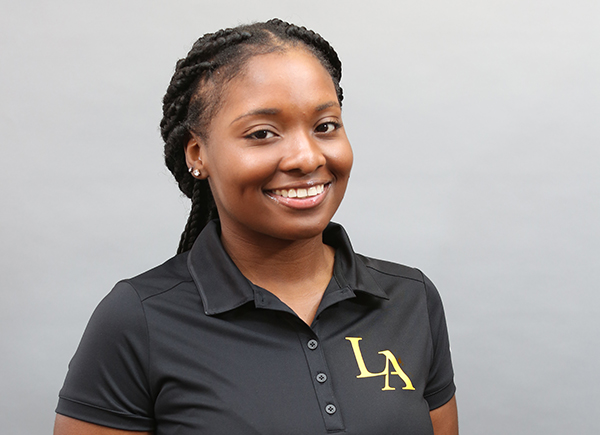 Freshman golfer Shamayah Revis etched her name in Cal State L.A. history by being an inaugural member of the women’s golf team. Revis is grateful to play on the college level and help build a legacy for the campus.

“I’m still in shock about it,” Revis said. “It’s truly a blessing to have this program start.”

Last month, the women’s golf team finished in sixth place for the California Collegiate Athletic Association (CCAA) championship with a total score of 1,192. Revis had rounds of 118, 108, 121 for a total of 347.

Revis is majoring in Public Health and noted how a communications class that she took last fall semester was her favorite.

“I actually made it to the final round with the speech showcase,” she said. “For the final showcase, I did my speech on ‘why should the president’s use of social media be monitored.’”

Being an athlete has kept Revis’ commitment to her studies up to par. She noticed this when she became a student athlete during her sophomore year at Rosewood High School in North Carolina.

“It just pretty much keeps me on top of my things, I don’t slack or anything,” Revis said. “I get my assignments done way early because of my tournaments.”

“He’s never talked down on any of us and that’s the best thing about it,” she said.

Golf came to Revis during her adolescent years when her aunt’s pastor introduced her to the sport.

“She took me on a golf course one day and she was like ‘You got to try this,’ so she got me clubs and clothes and everything,” Revis said. “I went golfing and I just fell in love with it.”

During her years in high school, Revis had accrued several scholarly and athletic achievements. In golf, she was elected as Player of the Month four times in conference play. Revis was also inducted in the National Honors Society in the 11th grade.

“I had a ceremony and everything,” she said. “It motivated me also to keep my grades up and always be successful.”

Revis earned a graduation cord for health science for her involvement in HOLSA, Health Occupational Students of America. She was president of the club as a senior and a secretary as a junior.

“I got that cord for graduation because of my grades in that class,” Revis said. “[HOLSA] had classes that followed it, which was anatomy, physiology, all that.”

Revis was also a member of DECA, a competitive business club.

“We went to different tournaments [in] surrounding cities of where I live,” she said. “It was pretty much like a brain game, that was very fun too.”

These achievements have given Revis much confidence on the green.

“You just got to be professional and set boundaries and set standards for different things,” she said. “That helped me with golf because with golf, you have to be your own leader, it kind of gave me the encouragement.”