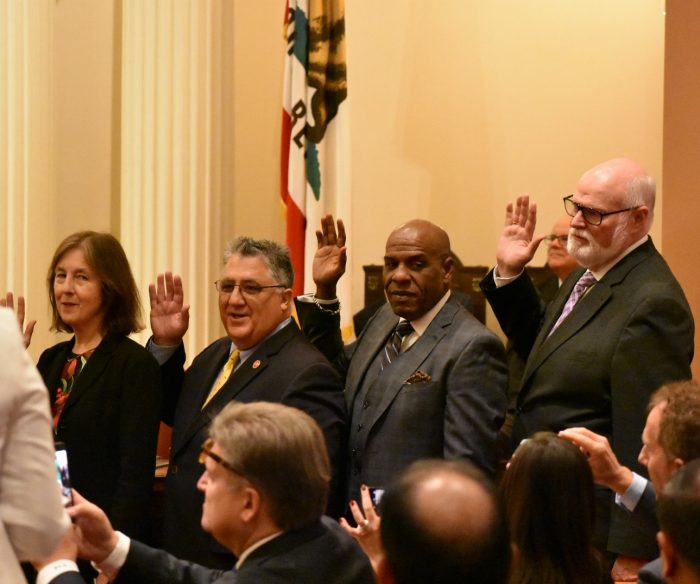 The start of the 2017-18 legislative session in Sacramento began Monday with the swearing-in of Steve Bradford as California’s newest state senator.  Bradford served as a member of the State Assembly after serving 12 years on Gardena’s city council where he was the first African-American elected to that body.  He replaces Isadore Hall who lost his congressional bid in November.

“I’d like to express my deepest gratitude to the people of the 35th Senate District who have place their faith in my efforts to be their voice, their advocate and their champion in Sacramento. Additionally, I am extraordinarily honored by the presence of so many of my supporters, my friends and my family members, including my mother, aunt and uncle, all of which have traveled to the State Capitol today to join me for this important moment as I was sworn in to serve as Senator.”

Dozens of constituents from the 35th Senate District which includes the cities of Compton, Carson, Inglewood, Gardena, Torrance and San Pedro travelled to the State Capitol from Southern California to witness Senator Bradford’s oath of office ceremony.  A local swearing-in ceremony will be held in January for those who were unable to make it to Sacramento.

Bradford grew up Gardena and completed his K-12 education in its public schools. He attended Purche Ave Elementary, Henry Clay Jr. High and Gardena High School before earning a Bachelors of Arts degress in Political Science from California State University, Dominguez Hills and San Diego State University. He is also the founder and chair of the Gardena Jazz Festival.

After being sworn into office Senator Bradford said, “Given the new Administration that’s embarking upon Washington, D.C., we here in California must do everything in our power to stand firm for our principles and our values and to continue advancing the progressive issues that matter to us. I look forward to the challenge and to working tirelessly to move our state forward by standing up for the poor, for working people, for a clean and safe environment, for social and economic justice, safer neighborhoods and more. With boundless optimism and determination, I am eager to get moving on the peoples work.”