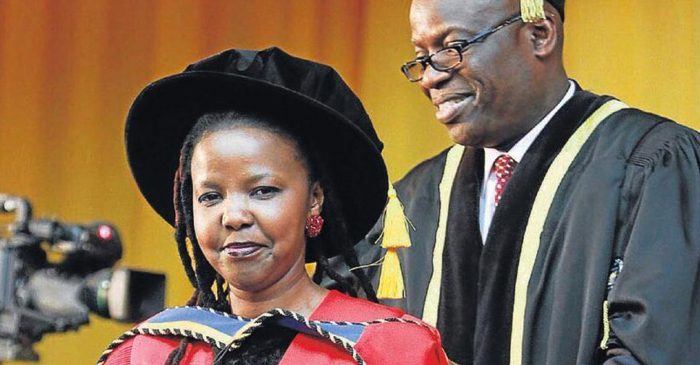 When the time arrived for Nompumelelo Kapa to write her doctoral thesis at the University of Fort Hare in Eastern Cape, South Africa, she likely responded: Masambe – a word that, when translated in English, means “Let’s Go” in the original South African language of isiXhosa.

The married mother of two and high school teacher made history by being the first person at the prestigious 102-year-old university to write her thesis in isiXhosa.

The school, which in the mid-20th Century earned a reputation for creating a black African elite, offers a Western-style academic education to students from across sub-Saharan Africa.

It has earned numerous academic awards and boasts many achievements.

“This is indeed a beautiful experience. I love my language so much,” Kapa told London’s Daily Dispatch.

For her efforts, Kapa received a doctorate in literature and philosophy.

“We are talking about transforming and decolonizing Africa, so isiXhosa should be considered and we also want to produce more isiXhosa writers, journalists, translators and others,” Kapa told the Sowetan news organization in South Africa.

The title of her thesis is, “Aspects of Culture and the Humor that Influence Naming in Selected IsiXhosa Texts: What’s in a Name?”

In explaining the reasons why she wrote her thesis in her mother tongue, Kapa said isiXhosa had become stifled as a result of “people finding it fashionable to write and speak in other languages, especially English, and in the process losing their identity and roots and endangering our heritage.”

Professor Nomsa Satyo called Kapa’s feat a milestone, a first of its kind.

There are 11 official languages in South Africa, of which Xhosa is one of the most widely spoken, according to South African tourism officials.

Approximately 16 percent of South Africa’s population, or 8.3 million people, cite Xhosa as being their home language.

Xhosa is characterized by a number of clicking sounds, which are formed by the tongue. These are represented by the letters c, x and q.

Those that speak the Xhosa language are usually part of an ethnic group known as the amaXhosa. This language is officially referred to as isiXhosa.

The word “Xhosa” is derived from the Khoisan language and means “angry men.”  Most of the languages in South Africa that involve tongue-clicking originate from the indigenous Khoisan people, who included plenty of different clicks in their speech and language, according to the website, sa-venues.com.

Xhosa falls under the umbrella of the Bantu languages, and is a representative of the south-western Nguni family.

As a result, South Africa is known to be the native land of the Xhosa folk.

This is especially true of the Eastern Cape, where the language is spoken extensively and taught in the schools.

The Zulu people of South Africa have their own name for the Xhosa people, the KwaXhosa. When translated, KwaXhosa simply means “land of Xhosa.”

Some other isiXhosa translations include:

Reportedly, it has been a milestone year for South African languages with another student, Hleze Kunju, becoming the first PhD student at Rhodes University in South Africa to write his thesis in isiXhosa.

“This study‚ on onomastics (the history and origin of a name) will contribute towards the development of the orthography (spellings) of isiXhosa so as to be on a par with that of languages that have been standardized,” Professor Satyo said.

“[Kapa’s] thesis is … imperative as a furtherance of‚ and a contribution to the development‚ promotion and use of isiXhosa as an official language of South Africa.”