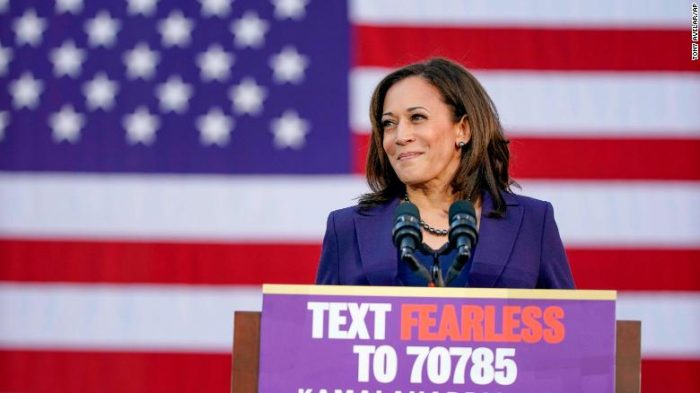 “We are here at this moment in time because we must answer a fundamental question. Who are we? Who are we as Americans? So, let’s answer that question, America. We are better than this,” Sen. Kamala Harris (D-CA) said in front of a large crowd in Oakland, California on the afternoon of January 27.

In a much-anticipated announcement, the Senator from California and former Attorney General officially announced she was a candidate for the presidency in 2020. Seven days before, on ABC’s Good Morning America, she made it clear she was in the race. In what many say was one of her best speeches to date in front of a presidential-size crowd she made it official.

A graduate of Howard University and a member of the AKA sorority, Harris’ rollout has been the most methodically of anyone who has entered the 2020 sweepstakes.Right down to the typography and campaign slogans, which are in the style of the historic 1970s campaign of the first Black woman ever elected to Congress, Shirley Chisholm, Sen. Harris’ rollout has reached for clarity.

In the age of Donald Trump’s politics that clarity and focus on morals was made clear by the 54-year old attorney and U.S. Senator.Harris used the word “we” a lot during her speech. It was a clear indication of the type of campaign she plans to run.

“Of the people, by the people, and for all people,” Harris said, “People are trying to convince us that the villain in our American story is each other. But that is not our story. That is not who we are.”

While Sens. Elizabeth Warren (D-MA) and Kirsten Gillibrand (D-NY) have announced exploratory committees that will likely lead to an official presidential run. Sen. Harris is now in the 2020 race all the way.In the first 24 hours after confirming she would run seven days ago on television her campaign raised $1.5 million.

Harris joins the biggest and most diverse field of candidates in the history of American politics.

“One of the huge tests for Kamala Harris was whether she could translate all that’s compelling about her on paper, go onto a stage and deliver a retail political speech that’s compelling and resonant. Hard to argue she didn’t do that today,” wrote MSNBC host Joy Reid on January 28 on twitter.

On the same day, former Starbucks CEO Howard Schultz talked on 60 Minutes about a presidential run. There were also reports that former Secretary of State Hillary Clinton has not ruled out a run in 2020.

But Harris’ name recognition and charisma will likely giver her an advantage as the first candidate outside of the baby boomer generation whose candidacy is a reminder of the historic and successful 2008 run of former President Barack Obama.