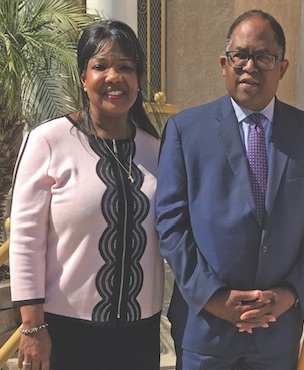 In the wake of the March 31 murder of Ermias Asghedom, known worldwide as Nipsey Hussle, L.A. County Supervisor Mark Ridley-Thomas has been at the forefront of engaging resources to stop the violence and heal the community in South Los Angeles.

On April 5, he joined with Dr. Barbara Ferrer, L.A. County public health director, to open the Office of Violence Prevention. The new initiative, headquartered at the MLK Center for Public Health, will provide a range of programs for individuals and families to reduce violence and address trauma.

“The scourge of gun violence has affected too many in our community. It’s not just the pain and destruction that happens to an individual in the moment. It’s much more than that,” said Ridley-Thomas.

“It’s also the collective trauma that families and communities experience in dealing with these tragedies. The Office of Violence Prevention’s efforts will be focused on working upstream to address the root causes of violence, to preempt it from occurring,” he said.

Long known for partnering with faith leaders to achieve his goals, Ridley-Thomas readily agreed to the invitation by the Rev. Dr. Mary S. Minor to utilize her church, Brookins-Kirkland Community AME, in the violence prevention campaign.

With her edifice located less than one-half mile from the site of Hussle’s death, Minor had already been considering how BKCAME could assist in healing the community.

“The Spirit of the Lord said to me, ‘What will be your response to what’s happened 0.3 miles from your church? How will you exhibit [God’s] presence in the community? After all ‘community’ is in the church’s name,’” recalled Minor.

“These words came to mind – ‘The doors to the church are always open.’ I say them every Sunday when the invitation to Christian Discipleship is extended. The Spirit said, ‘Open the doors of the church to the community!’”

In response, Minor contacted the offices of Ridley-Thomas and L.A. Councilman Marqueece Harris-Dawson on April 2. The following day, Ridley-Thomas conducted an interview with ABC’s “Nightline” on the front steps of BKCAME. He also invited Minor to participate in the launch of the Office of Violence Prevention where he announced that Brookins-Kirkland would be a satellite office for the Department of Public Health.

On April 8, DPH therapists were on hand at the church, conducting individual sessions with people in need of mental health or other assistance. Also, counseling services will be available at BKCAME on the day of the funeral, April 11, and the following day, April 12, from 4 p.m. to 7 p.m.. 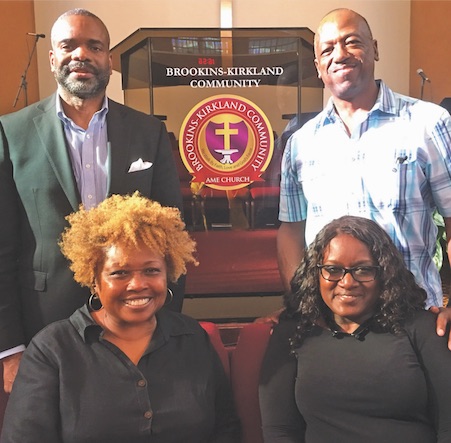 The BKCAME congregation embraced the opportunity to serve, according to Dolores Bolton, a long-time member and vice-chair of Steward Board 2.

“Now is the time, more than ever, for the church to open their doors to the community because of the divisiveness that’s in the nation right now. People are hurting and they need to be heard, so it’s really important that we open our doors with welcoming arms,” said Bolton. “We must listen to people and try to counsel them and let them know that God is in control!”

Offering similar comments, member David Moss, emphasized the importance of his church “getting outside the walls” to aid their neighborhood.

“We’re a community church and it’s extremely important that we go out into the community, that we’re there and present for anybody and everybody, and to help people where we can,” insisted Moss, who heads the BKCAME Men’s Ministry.

Dr. Bill Releford, co-director of the church’s Health Ministry, added, “The Black church, historically, has played numerous roles that relate to the needs, viability and wellness of the Black community. Mental health now has been added to the list of those things where the church can play a critical role.

“Our community experiences all forms of trauma, but ‘business as usual’ doesn’t work anymore. Now the church can play a role in mental health and healing our community as we have been confronted with this form of trauma.”