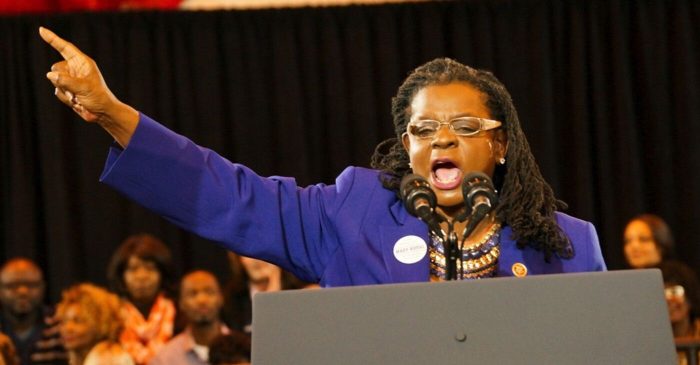 Wisconsin Democratic Rep., Gwen Moore has made a strong and very personal case for lawmakers to keep the Affordable Care Act.

In a televised interview, Moore revealed her cancer diagnosis and where she believes she’d be if it weren’t for former President Barack Obama’s signature piece of legislation, which allows her to afford the treatments and necessary medication to fight the deadly disease.

“If I had to pay $15,000 a month for this medicine, I’d be here writing my obituary, perhaps instead of talking to you,” Moore told MSNBC in an interview this week.

She said her oral medication, Imbruvica, helps to keep her in remission.

Without the insurance coverage, she’d be on the hook for $15,000 per month.

Prior to taking Imbruvica, Moore said she had intravenous therapy twice a month at a whopping $20,000.

“The GOP is always talking about the costs of the ACA: the cost of protecting pre-existing conditions, the cost of essential health benefits, the cost of the individual mandate,” Moore said.

“But what about the value of life? The lives of your kids? Your parents? That’s the core of this debate,” she said, adding that she’s “alive today because of comprehensive insurance that covers most” of the money in medication costs per month she now needs.

First diagnosed last summer with small lymphocytic lymphoma – a non-Hodgkin lymphoma, where the cancer originates in the lymphatic system – Moore said the disease is manageable because she caught it early and she takes her medicine every day.

After her MSNBC appearance, Moore spoke before the House Ways and Means Committee in which members held a hearing on protecting those with pre-existing conditions – a major component of the Affordable Care Act, which President Donald Trump and most Republicans have fought against.

Moore and other Democrats, who’ve now taken control of the House, have said they want to reverse the GOP’s decision to take away the individual mandate in the health care law.

A decision late last year by a Texas judge, who ruled the individual mandate unconstitutional, is currently being appealed and Moore said she hopes Congress will act to protect the law.

In their attempt to maintain the law that’s commonly known as Obamacare, Democrats have also pushed a “Medicare-for-all” proposal that NPR noted has gained in popularity.

Several Democratic presidential hopefuls are getting behind the idea, according to NPR which cited California Sen. Kamala Harris, who said her aim would be to eliminate all private insurance.

“Who of us has not had that situation, where you’ve got to wait for approval and the doctor says, well, ‘I don’t know if your insurance company is going to cover this,’” Harris said during a CNN Town Hall event. “Let’s eliminate all of that. Let’s move on,” she said.

Harris was a co-sponsor of a 2017 bill written by Sen. Bernie Sanders, (I-Vermont), that would have created a national, single-payer health system, eliminating the private insurance system.

Everyone would get a Medicare card and doctors would have to sign annual agreements to participate.

For Moore, that would be ideal, particularly for those who suffer with life-threatening illnesses like cancer.

“The mere suggestion that it could be cancer was anathema to me because nobody ever wants to hear the C-word,” Moore said.

“All of the while that I was going through the diagnosis and the care that I was getting, I thought about the number of people that I knew who die needlessly from cancer because they didn’t get early diagnosis.”

“It’s our job as legislators to ensure that no American has to choose between seeking treatment & providing for their families.

“I personally know people who marched into the emergency room two weeks before they died because they didn’t have health insurance. I am just a grain of sand on a beach.”