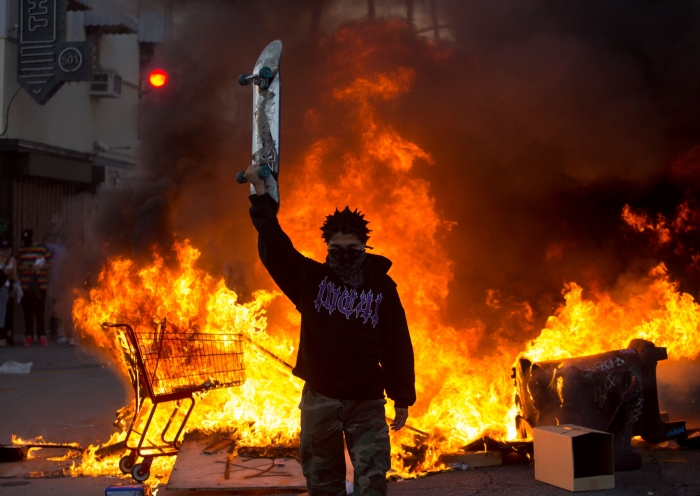 Caption: A protester holds a skateboard in front of a fire in Los Angeles, Saturday, May 30, 2020, during a protest over the death of George Floyd, a handcuffed black man who died in Minneapolis police custody on May 25. (AP Photo/Ringo H.W. Chiu)

The racist public murder of George Floyd in Minneapolis has now added to a list of recent and historical victims of police violence and racist terrorism, including Devon Brown, Eric Garner, Trayvon Martin, Mike Brown, Breonna Taylor, Ahmaud Arberry, Tamir Rice, Atatiana Jefferson, Philando Castile and numerous others. And as our people rise up in massive resistance seeking justice for these Black men, women and children, martyred on the altar of White supremacy, they serve as bright lights and fierce fires lifted up to show the way forward in struggle. Indeed, they call on us to intensify and continue the struggle against the radical evil of these murderous police and vigilante practices and against the savage system which sanctions and supports them and other related forms of oppression. And we owe it to ourselves and to our martyrs to continue the intensified struggle, keep the faith and hold the line until victory.

This massive rising up in resistance against the lynching-like public murder of George Floyd by the police that began in Minneapolis and spread across the country to over 141 cities, rightly recalls Ferguson and its crucial role in expanding the struggle against police violence and terrorism. For the struggle against police violence and the murder of Mike Brown in Ferguson became that critical spark that ignited a forest fire of resistance and revolt against these racist and wanton killings under the color and camouflage of law. But our struggle against state and society sanctioned racial violence against Black men, women and children extends back beyond Ferguson to the Sixties and ultimately the Holocaust of enslavement.

Our struggle has been against the whole system of oppression, made clear now, not only by the persistent practice of police violence and terrorism, but also by our increased and unequal suffering from the COVID-19 pandemic. This requires that we understand these demonstrations, not as isolated actions or events, but as part of our longer history of struggle, revolt and resistance against oppression. And the current struggle, especially reaffirms our right and will to be ourselves, free ourselves, and to live and simply breathe without the penalty of death through police violence and racist terrorism.

If there was ever a clear and uncontestable case of the moral, cultural and physical savagery of politically protected and socially sanctioned police violence, it is the cold-blooded public torture-murder of George Floyd in Minneapolis. And like the video on the nightly news, this scene of racist savagery is looped in life repeatedly, undermining the sense of security, terrorizing persons and a whole people and demonstrating a system of inhuman and unrepentant racist oppression.

There he is, a White policeman with his knee on the neck of a handcuffed and subdued Black man, enacting a racist ritual of death and power over Black men and Black people centuries old. This lording over George Floyd as a Black man is a racial and gender act to demonstrate to him and his people their vulnerability to White domination. He pleads for his life, pleads to be allowed to breathe, saying “don’t kill me” and “I can’t breathe” repeatedly. But the cowardly and racist White “conqueror” will not be moved, cannot muster even an ounce or iota of humanity within him. He is not easily satisfied with his initial savagery and continues to press down on his victim’s neck, even after the body of George Floyd goes limp and becomes lifeless. It is a cold-blooded and callous racist and depraved disregard for Black people, Black rights and Black life repeated throughout U.S. history with a morally repulsive regularity. And it must not and cannot be left unanswered or unopposed. Indeed, the very savage and barbaric nature of it requires our righteous anger and relentless struggle against it and the system which spawns, supports and seeks to justify it, and the multiracial coalition evolving in struggle becomes morally imperative for all who are committed to human life and equal justice.

Thus, as we mourn, we must move; as we agonize, we must be rightfully and actively angry at evil, injustice and oppression; and as we remember and rise up, we must commit and recommit ourselves to righteous and relentless struggle to end police violence and terrorism and systemic oppression. This means continuing the struggle for justice for George Floyd and all others whose lives and deaths form a vital part of our unfinished fight for justice. The charge must be first degree murder, for it was done with malice and forethought and the other police must be arrested and tried as crime partners in the criminal killing of George Floyd.

Since the struggle is a larger struggle against police violence and terrorism, we must struggle to cut their budgets and continue the struggle to restrain, deter and reorient police from the militarized practice as occupying armies. We must reduce their capacity to kill under the color and camouflage of law as the Weber Bill, AB 392, seeks to do. But we must also radically reconceive and reconstruct the notions and practice of policing and public safety as well as the whole system itself. This means we must compel the country to stop praising and caressing itself and face its ugly immoral and deadly history and current racist and capitalist practices of assigning different levels of human worth and social status, and therefore creating the basis for different life conditions and life chances.

Clearly, capitalism’s and racism’s most famous spokesman, actor and enabler, chief tweeter and most clueless leader, Donald Trump, must be removed from office as part of the larger struggle to transform society. And we must not let him, his supporters or enablers divert us or the country from the discussion of the central issues of justice, security, and the right to life and the conditions for a good life. Nor can we let them delegitimize our righteous struggle by calling the demonstrators “thugs” and “looters” when it is they who engage in the most shameless legalized thuggery and looting, not only in this country, but around the world.

Certainly, we must admire and praise those who have risen in massive resistance in the street at the risk of their health, safety and life in the face of two viruses: the pandemic of COVID-19 and the pathology of oppression. And it is right for them to raise up the enduring ethical position, “no justice, no peace,” and to say if the system doesn’t respect our humanity and practice justice, shut it down. But we know from history, lived experience and rightful reasoning that the struggle before us is a long, difficult, dangerous and demanding one. Thus, Amilcar Cabral has taught us that we must “mask no difficulties, tell no lies and claim no easy victories.” And we know from the teachings of Mrs. Fannie Lou Hamer that justice is not easily achieved or sustained and that “we have to fight for justice every step of the way.”

Finally, we must, if we are to sustain ourselves and the struggle, rebuild an overarching movement that links our philosophies and practice of struggle, unites our energies and efforts, and prefigures the good community and society we all want and struggle for relentlessly. Building this movement, we can, from a position of power and independence, rightfully join with other oppressed, struggling and progressive peoples who also have the desire and will to struggle to achieve shared good and common ground goals. But in doing all this, we must remember Min. Malcolm’s teaching that “wherever Black people are is a battle line.” And thus, our daily battle cry must be, as we say, “Everywhere a battleline; every day a call to struggle.” 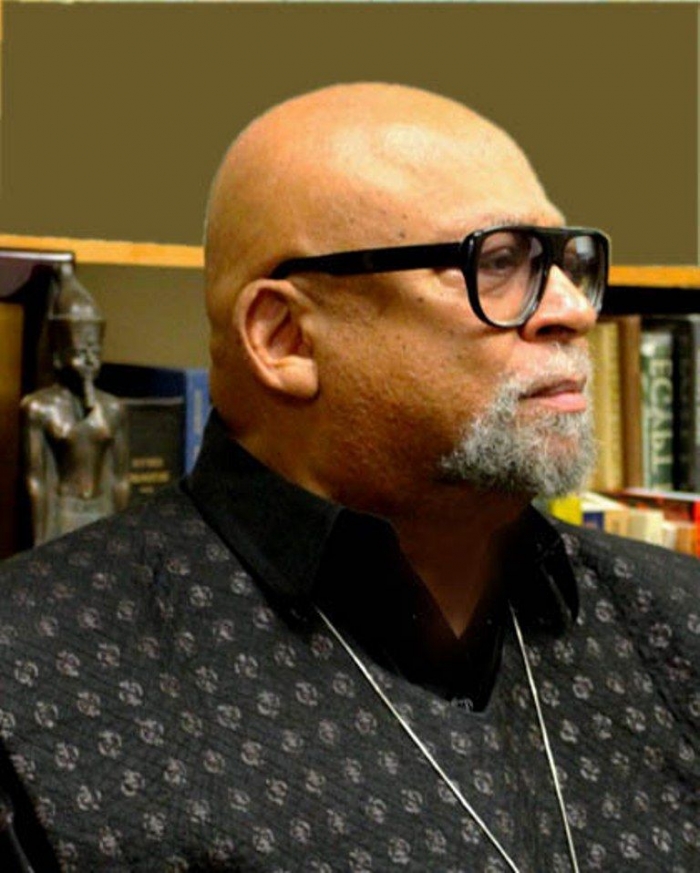