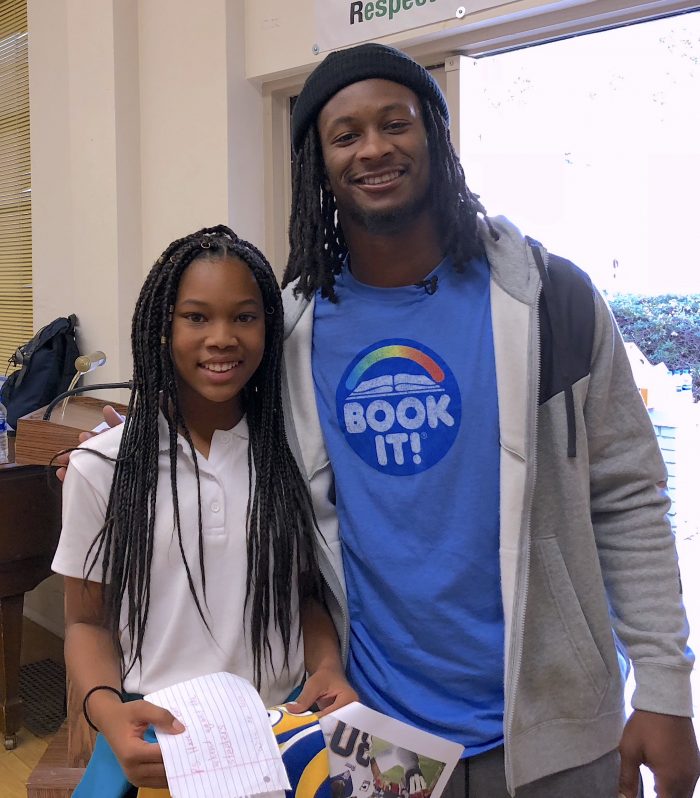 On Tuesday, Los Angeles Rams towels whirled above the heads of students inside the Worthington Elementary School auditorium accompanied by chanting, “Who’s House?…Rams’ House.” Students eagerly awaited the appearance of Rams’ All-Pro running back, Todd Gurley for his Childhood Literacy initiative in conjunction with Pizza Hut, the Rams, and The BOOK IT! Literacy Project.

“I always thought literacy is one of the main things that should be focused on with kids,” explained Gurley, a back-to-back NFC West Champion. He declared childhood literacy as his initiative as part of the NFL’s My Cause, My Cleats campaign.

While students indulged in a complimentary pizza party sponsored by Pizza Hut, Gurley read from the book “The Magician’s Hat”, authored by his former University of Georgia football teammate, Malcolm Mitchell.

“For me, it would’ve had to have been Michael Vick, Ray Lewis, Ed Reed,” Gurley responded when asked who he would have picked to read him a book in elementary school. “You know those guys were some of my favorite players. If I was a kid and that happened, I don’t know, I would be freaking out.”

Years later, “It’s definitely something I never thought I’d be doing, but I love it,” the two-time Pro Bowler added. Gurley emphasized the importance of the partnership for such a universal cause.

Each student received a copy of “The Magician’s Hat” from BOOK IT!, a program created in 1984 to motivate children to read by rewarding students’ reading accomplishments with praise, recognition and pizza.

“Sometimes, underserved schools don’t get enough and when people want to lend that helping hand and that support, it’s very cherished and welcomed,” said Miguel Perez, Worthington school principal. “It’s like what I tell the kids, this doesn’t happen every day, you’re very lucky.”

Worthington Elementary, which is a part of the Inglewood Unified School District, is primarily comprised of Black and Brown students.

“Literacy for all is the goal of the district,” stated Dr. Carmen Beck, Inglewood Unified School District chief academic officer. 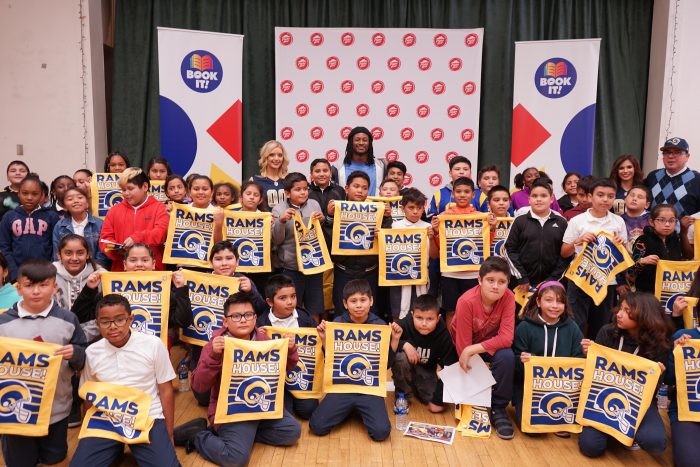 Gurley em­phasized the importance of the partnership for such a universal cause. He de­clared childhood literacy as his initiative as part of the NFL’s My Cause, My Cleats campaign. Courtesy Photo

Beck shared the three fundamental keys to literacy with the students: Close reading, engaging in academic conversations with classmates, and writing with comprehension.

“It was fun and I had a great experience meeting a National Football [League] player,” reflected Aidyn Brown, Worthington’s Student of the Year. “For him to come to our school, it was a really nice privilege.” She was selected as one of the students to ask Gurley a few pressing questions.

“When they see a professional athlete who went to college, the University of Georgia, and really encourages literacy and education as a pathway out of their current condition, it really inspires our kids,” expressed Perez.

Brown is enrolled in the dual immersion program, where she has become bilingual, speaking both Spanish and English fluently. Over time, she developed a passion for reading.

“I feel like I can learn more stuff than just being on electronics all day,” she stated.

Gurley recalled that growing up, his inspiration to read came from feeling empowered and immersed in books like the Harry Potter series.

“And then they got too long for me,” he laughed.

Following the book reading, Gurley provided students with an exclusive first-look at his customized Nike My Cause, My Cleats. The childhood literacy themed shoe featured an illustration of the cover art for “The Magician’s Hat” on one side. On the other side, it reads, “What’s Your Story.”

Gurley, along with several other NFL players, will debut his specialty cleats on Sunday, Dec. 16, as the Rams face the Philadelphia Eagles on Sunday Night Football.