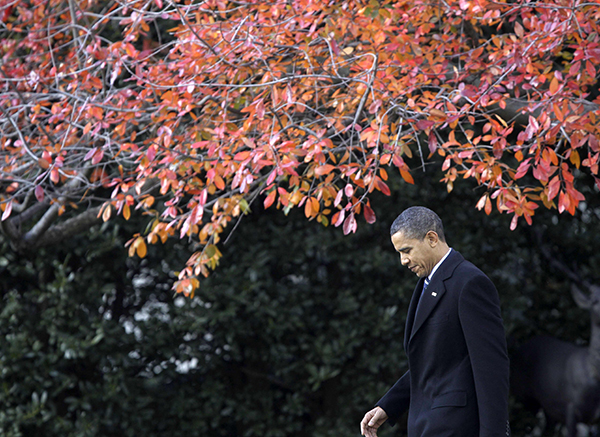 President Barack Obama walks across the South Lawn of the White House in Washington, Monday, Dec. 6, 2010, to board Marine One helicopter as he travels to Winston-Salem, N.C. (AP Photo/Charles Dharapak)

Thank you for the grace you’ve shown through both tribulation and triumph over the past eight years of your presidency.

You inherited the country on the brink of economic collapse and your coverage plan gave healthcare to millions of Americans and secured health benefits for millions more. You created jobs in clinics and hospitals that were not there before and you made sure to attack the discrimination in the insurance industry head on. Average wages in our country are rising and unemployment rates are low. You are leaving this country better than where we were eight years ago.

But as you said in your farewell address last week, it’s important that we aren’t complacent with our goals. You said that we are not where we need to be and that we all have more work to do. I could not agree more.

My constituents are worried about these next four years and I am too. But I have faith that the principles you led our country with over the last eight years will serve us well.

You have shown our next generation of leaders the way. Somewhere in South Los Angeles there is a group of teenage black boys and girls who don’t know what it’s like to have a President that doesn’t look like them. You gave our community that. You gave Black America that.

This Friday, you will leave the White House as President of the United States for the last time. Know that as you leave, black and brown children will know that it is possible to live your dreams and Black America will know that yes, we can.