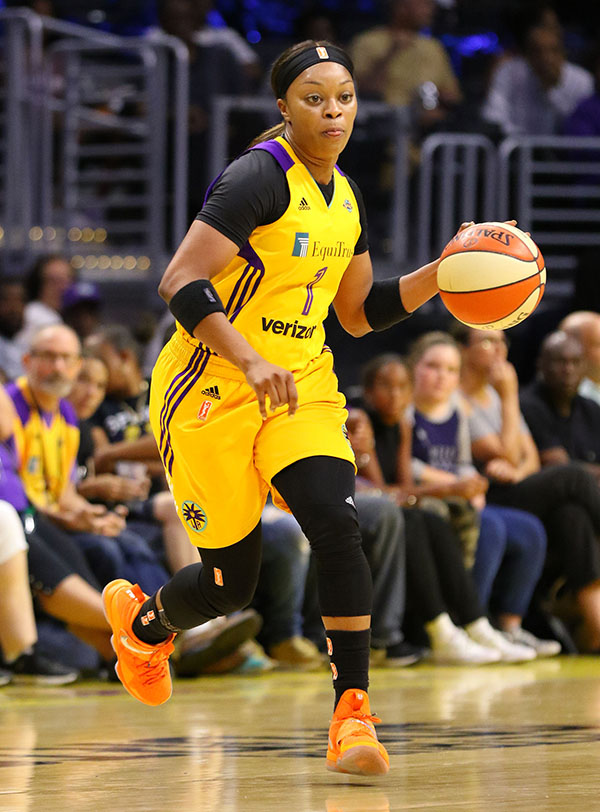 “I’m happy to announce that we have resigned Odyssey. She came in last season and was a tremendous asset to our team both offensively and defensive,” said Executive Vice President and General Manager, Penny Toler. “Her continued development and commitment to the team is going to be huge for our future success.”

Sims was the second overall pick in the 2014 WNBA Draft by the Tulsa Shock (now renamed Dallas Wings). She had a breakout rookie season playing in all 34 games and was named to the WNBA ALL ROOKIE team, averaging 16.7 PPG, 4.2 APG, and 2.8 RPG.

“I am so excited to have signed back with LA! We had such a fun season last year, and I am looking forward to another fun season this year,” said LA Sparks point guard, Odyssey Sims. “We have some unfinished business to take care of and I can’t wait for this season. Most importantly, I’m happy to be an LA Spark.”

Founded in 1996, the Los Angeles Sparks of the Western Conference of the Women’s National Basketball Association (WNBA) have won three WNBA Championships (2001, 2002, 2016). The Sparks remain one of two active teams in the league to have won back-to-back titles, and have qualified for the playoffs in 18 of their 22 seasons. Led by an ownership group directed by 5-time NBA Champion Magic Johnson and Mark Walter, the Sparks are dedicated to ensuring that each home game at Staples Center encapsulates a championship entertainment experience, while also showcasing the best global female athletes on the court. The team plays their regular season from May through September. Please visit LASPARKS.com or call 1-844 GO SPARKS to Purchase 2018 Season Tickets Today!