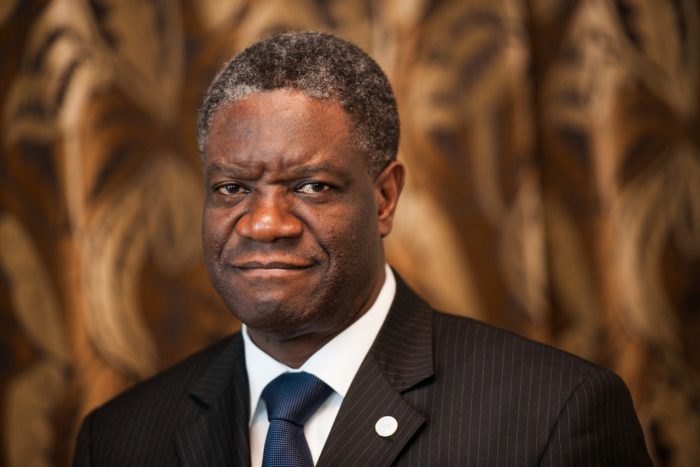 Having treated more than 50,000 rape victims at Panzi Hospital in the Democratic Republic of Congo, Dr. Denis Mukwege is known as “the man who mends women.”
(Courtesy Photo)

Having treated more than 50,000 rape victims at Panzi Hospital in the Democratic Republic of Congo, Dr. Denis Mukwege is known as “the man who mends women.” “The strength of the women I have been treating for more than two decades is what inspires me,” the newly-minted Noble Peace Prize winner told NNPA Newswire in an exclusive interview this week.

“Their resilience and their courage is a daily source of inspiration,” he said.

Surprised by the Nobel Prize announcement earlier this month, Dr. Mukwege said he was performing surgery when he began hearing people yelling.

“This is when I understood that this burst of enthusiasm from my colleagues was because I had just received the Nobel Peace Prize. I did not expect [to win] at all,” he said.

“My first reaction was to think of all the women, rape victims around the world, to whom I have dedicated my life for the past 20 years, who finally received the recognition they deserve,” Dr. Mukwege said.

The world-renowned gynecological surgeon is the founder and medical director at Panzi Hospital in Bukavu.

As a young child, Dr. Mukwege accompanied his father, a Pentecostal pastor, while visiting sick members of the community. He said that would later inspire him to become a doctor.

He made the decision to specialize in gynecology and obstetrics after observing that female patients at Lemera Hospital in the Congo suffered from insufficient medical care, which caused complications during their deliveries.

Working on issues of maternal health, since 1999 Dr. Mukwege and his staff at Panzi Hospital have helped to care for more than 50,000 survivors of sexual violence.

The hospital not only treats survivors with physical wounds, but also provides legal, and psycho-social services to its patients.

“Many impacts are often ignored or forgotten. One of the first things that come to my mind is the deep psychological wounds suffered by victims, which – if not given the proper care – can last a lifetime,” Dr. Mukwege said.

“These psychological consequences are often ignored, yet they have an impact not only on the survivors, but also their relations with their families and with society as a whole,” he said.

“Broadly speaking, I think it is essential to listen to victims because they – more than anyone else – know what they want and what they need. Listening to survivors is also a way to empower them, which is an important step in their healing process,” he said.

The birth of the #MeToo movement and the awarding of the Nobel Prize to he and Iraqi Yazidi human rights activist Nadia Murad, who has detailed her life as an ISIS sex slave, illustrate that mentalities are slowly beginning to change and that there’s a gradual evolution in mindset, Dr. Mukwege said.

“However, I argue that rape is a weapon of mass destruction, cheaper than a gun and terribly effective, it is still widely used today in conflict zones to terrorize populations, not only in DRC, but also in Myanmar, South Sudan, Iraq, and other places,” he said.

“When women’s sexual organs are used as battlefields, the social fabric of communities is destroyed, impacting the society as a whole. In Congo especially, as women are the heart of the household, the consequences of sexual violence are irreversible and transgenerational.

“I do not think that governments are yet fully aware of the magnitude of this phenomenon and its consequences.”

Dr. Mukwege said the Black Press should remain vigilant about allowing the voices of victims to be heard. “I believe that the voices of all minorities need to resonate strongly to complete and sometimes challenge the majority’s narrative,” he said.

“This is of course the case of African American voices – illustrating the essential role of the Black Press – as well as the voices of all victims of sexual violence worldwide.”