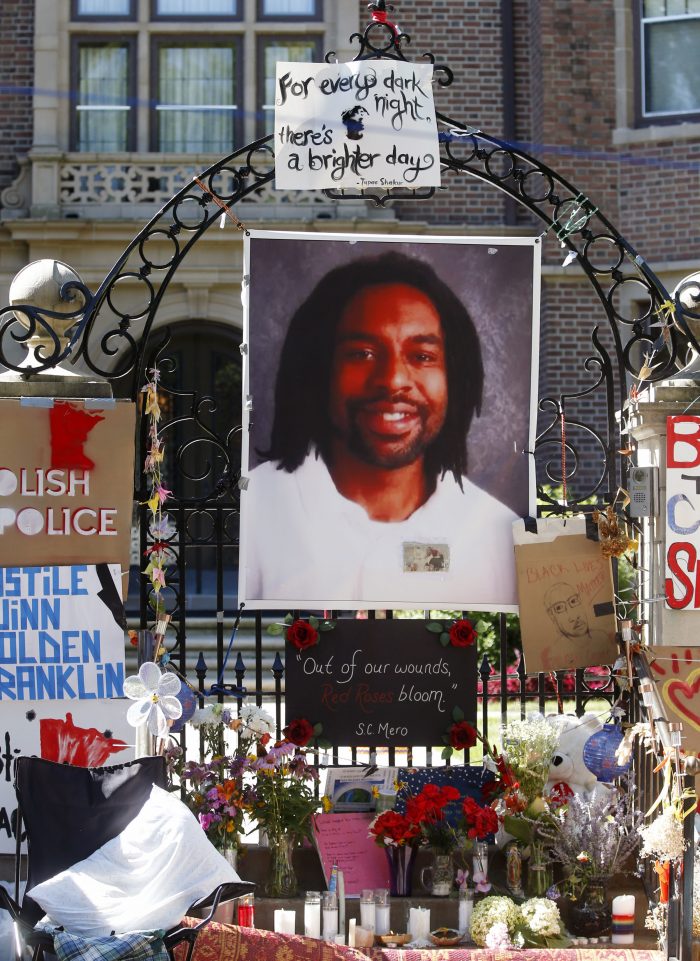 A memorial including a photo of Philando Castile adorns the gate to the governor’s residence where protesters continue to demonstrate Monday, July 25, 2016, in St. Paul, Minn., against the July 6 shooting death of Castile by a St. Anthony police officer making a traffic stop in Falcon Heights, Minn. (AP Photo/Jim Mone)

ST. ANTHONY, Minn. (AP) _ The police officer who killed a black motorist in a shooting whose bloody aftermath was livestreamed on Facebook was defended by his chief Wednesday as a level-headed member of the force with “a real sound ability when it comes to communicating and relating to people.”

In an interview with The Associated Press, St. Anthony Police Chief Jon Mangseth sketched a portrait at odds with the image of the officer screaming expletives while pointing his gun at the dying man in the video.

St. Anthony police officer Jeronimo Yanez fatally shot 32-year-old Philando Castile during a traffic stop in nearby Falcon Heights on July 6. Castile’s girlfriend streamed the aftermath live on Facebook and said Castile was shot several times while reaching for his ID after telling the officer he had a gun permit and was armed.

More than a month later, Yanez was expected to return to work for the first time Wednesday, Mangseth said. Yanez will perform desk duties and other administrative work until the investigation is completed and charging decisions are made, the chief said.

Mangseth wouldn’t discuss any details of the shooting, including what prompted the traffic stop that preceded Castile’s death, citing the state Bureau of Criminal Apprehension’s ongoing review of the incident.

Mangseth also wouldn’t say whether he thinks his officer should be charged or exonerated in the case. But he said the 28-year-old Yanez, who is Latino, has had a sterling reputation in St. Anthony’s police ranks since joining the force in late 2011. The chief described Yanez as energetic and intelligent, a skilled officer whom he chose to join the department’s special crime prevention program.

“He has a real sound ability when it comes to communicating and relating to people,” Mangseth said. “He showed me that he could shine in that public eye.”

In Castile’s girlfriend’s archived video of the aftermath of the shooting, Yanez is shown occasionally yelling expletives and pointing his gun at Castile as he lies bleeding in the driver’s seat of the car.

“I told him not to reach for it! I told him to get his hand off it!” he screams. The chief called Yanez’s reaction common in a high-stress situation.

Through an attorney, Castile’s family declined to comment on the chief’s assessments.

Castile’s death set off weeks of protests and calls for Yanez to be charged. It also put the sleepy collection of St. Paul suburbs that St. Anthony police serve in the group of communities dealing with officer-involved shootings of black men, along with Baltimore, Ferguson, Missouri, and most recently Milwaukee.

“There’s been no time in my career where we’ve ever had this type of dynamic at work, this national stage, so to speak,” said Mangseth, who joined the department in 1995 and took over as chief earlier this year.

That scrutiny eventually revealed Mangseth’s department has disproportionately arrested African Americans. While just 7 percent of the Minneapolis-St. Paul metropolitan area is black, nearly half of the St. Anthony police’s arrests in the first half of 2016 were of black people, according to an AP analysis of arrest data provided by the department. Members of Minnesota’s black community said the statistics were proof of racial profiling.

Mangseth called those arrest rates a societal issue that extends far beyond law enforcement, St. Anthony’s police department or the neighboring communities of Falcon Heights and Lauderdale that it also serves. He said it merits a discussion in their area of 16,000 people, and said he’d consider implementing bias training for his 23-member department.

“I am open for that training,” he said.

Mangseth said he spoke to Yanez a handful of times while he was on administrative leave. The chief said he made sure to offer counseling or psychological services, though he couldn’t say whether Yanez had used them.

“He’s concerned for his future and for his family,” the chief said. “This has put him and his family front and center in our metro area, not to mention the nation.”