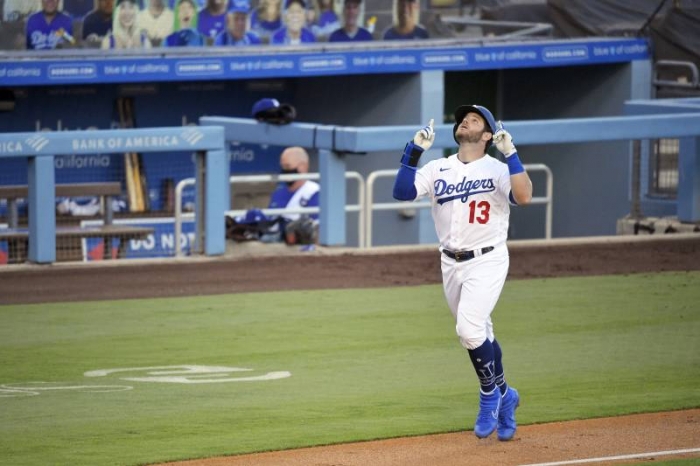 As the sun set over Dodger Stadium on Friday evening, Max Muncy homered twice and doubled before an unusual crowd filled with cardboard cutouts that stood in the place of real fans and crowd noise was pumped in to simulate the Friday Night Lights players are accustomed to as the Dodgers cruised to a 9-1 win over their storied rivals, the San Francisco Giants.

“No fans, it’s different. It’s not the adrenaline rush you get,” said Muncy. “You don’t hear the roar of the crowd. They’re doing the best they can with the crowd noise, but it’s just not the same. It’s a little bit different.”

Though there were no fans, no fireworks show and Muncy was moved from the leadoff batter position that he played just the night before, he was able to lock in and focus on the bigger task at hand helping his team win the game.

“It’s just tougher to navigate,” Dodgers manager Dave Roberts said on his decision to slide Muncy from the leadoff position for Mookie Betts. “For me to have the buy-in from the players regardless of where they hit and just to take their at-bats, I think it makes it way easier on me and I think it makes it more difficult on opposing managers.”

Muncy got into a rhythm early with a solo shot in the first inning off of a fastball that broke over the middle of the plate thrown by Giants’ Tyler Anderson.

“I keep getting asked what I think about it and I’m just willing to do whatever it takes to help the team win,” commented Muncy. “If they tell me that’s where I need to hit, I’ll do it. All I care about is helping the team win and winning the World Series this year.”

Muncy also scored on the front end of a double-double with Justin Turner in the fourth inning. At the bottom of the sixth, Muncy followed that up with another hit that flew over center field and landed on the opposite side of the fence.

“It was really good to see him have a good night tonight,” stated Roberts.

The two players that will be interchanging in that lead off role for the foreseeable future, Muncy and Mookie Betts both had impressive nights. Betts, who signed a 12-year, $365 million contract, notched his first RBI for Los Angeles on Friday.

“Potent. Dangerous. Explosive. Exciting,” Muncy used as words to describe the Dodgers’ offense. “There’s not really one word you can pick for it.”

Through two games, the Dodgers’ offense has scored 17 runs against eight different pitchers and put 43 runners on base in two seamless victories over the Giants.

“It’s just nice to get out there in real games and see what this lineup can do,” said Muncy. “It was exciting during Summer Camp. It’s even more exciting now that the real games are going on.” 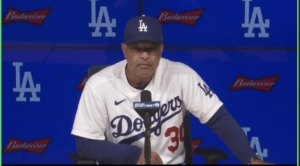 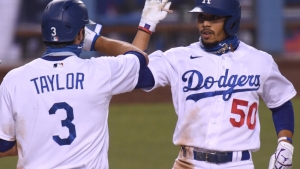