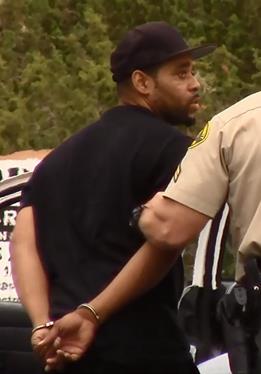 A Lancaster man who pimped two women, including the mother of a kidnapped toddler who was strapped into a car seat and left in a shed in Palmdale, was sentenced today to 26 years in prison.

Brandon Michael Wynn, 34, pleaded no contest last month to two counts each of human trafficking and pimping involving the tot’s mother and another woman, and four counts, including attempted murder and assault by means likely to produce great bodily injury, involving the girl’s mother.

Other charges, including kidnapping and child abuse counts involving the toddler, were dismissed as a result of his plea.

Wynn’s co-defendant, Regina Renee Estorga, 45, pleaded no contest to one count each of kidnapping involving the girl’s mother and assault with a deadly weapon. Estorga — who was not charged with the child’s abduction — was sentenced to six years in prison.

On July 16, 2015, Wynn assaulted one of the women he had forced into prostitution, according to Deputy District Attorney Dennis Vincent. Two days later, Wynn and Estorga took the woman to a remote area in the desert, where they beat her, doused her with bleach and left her naked and tied up, the prosecutor said.

The woman was subsequently found in the Lake Los Angeles area.

After an Amber Alert was issued for the woman’s 18-month-old daughter, Wynn took the girl to a shed in Palmdale and left her there, according to the prosecutor.

Following an extensive search, Wynn was eventually spotted July 18 in a car. He told sheriff’s deputies the toddler was nearby in the shed, and two Los Angeles County sheriff’s sergeants and a deputy found the child, authorities said.

The girl was suffering from heat exposure and dehydration and was still strapped into a car seat, according to the sheriff’s department.

Sheriff’s investigators said the child could have died had the weather in the Antelope Valley been more typical. An unseasonal rainstorm lessened the effects of the heat.