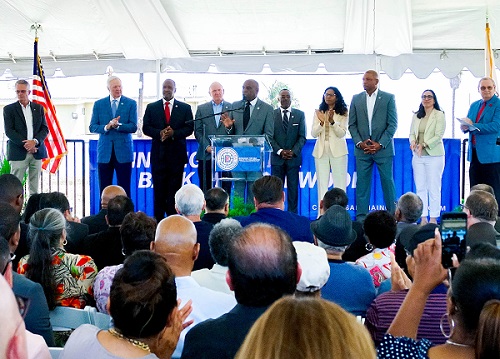 Assemblywoman Sydney Kamlager Dove (D- Los Angeles) along with Inglewood city officials and private business owners held a press conference on the future Clippers Arena site, to garner community-wide support for a bill aimed at ensuring the project meets environmental standards while maintaining “vital” community interests. Kamlager formally introduced Assembly Bill 987 on June 8, she said, to “assist the city of Inglewood in bringing NBA basketball back to the community by providing [California Environmental Quality Act] streamlining relief for the new arena project…” The legislation relieves project executors from any challenges or delays due to CEQA.

“This is an exciting opportunity to build a world-class environmentally friendly facility in the heart of Inglewood, helping to create thousands of good jobs and improve local services while respecting community interests across the region,” said Kamlager-Dove,.

“AB 987 will help achieve that goal by striking a critical balance, prioritizing the needs of local residents, businesses and the environment.  I am encouraged by the overwhelming support for this new Clippers Arena and look forward to working with a team owner who is committed to investing in our community as we work to return an NBA franchise to Inglewood.

“But under CEQA, opponents [have] the ability to use legal challenges to stall or stop a project for years and years. These delays can mean the difference between a project happening or dying on the vine. The people in this community have waited long enough. Jobs are needed now… we are below the poverty line and that’s not ok.”

According to California’s Natural Resources Agency, “CEQA is a statute that requires state and local agencies to identify the significant environmental impacts of their actions and to avoid or mitigate those impacts, if feasible. It applies to certain activities of state and local public agencies. A public agency must comply with CEQA when it undertakes an activity defined by CEQA as a ‘project.’ A project is an activity undertaken by a public agency or a private activity which must receive some discretionary approval (meaning that the agency has the authority to deny the requested permit or approval) from a government agency which may cause either a direct physical change in the environment or a reasonably foreseeable indirect change in the environment.

Opponents of the bill said it could only hurt Inglewood residents.

Forum representative Kimberly Kerns called it “a blatant abuse of the legislative process”.

“It guts the critical environmental protections defending neighborhoods from harmful impacts and severely curtails the right of the public to defend their own community,” she said via a statement released to the media.

“The bill creates different rules for those seeking to develop on the proposed arena property and Hollywood Park site, allowing them to sweep the devastating impacts of endless traffic and significant pollution under the rug without regard to environmental impacts while everyone else in Inglewood has to fully comply with environmental protection laws.”

“California already provides relief for projects seeking streamlining of the judicial process through AB 900,” she said. “Ultimately, this bill makes a mockery of existing laws in place to protect residents and the environment…”

Forum officials recently filed a lawsuit against Inglewood and the project’s developer, since the arena will use land close to their own entertainment venue, land they said, they were deceived into giving up for their competition. The Clippers Arena project will be built entirely with private funds and will involve the conversion of vacant, city-owned land under the flight path of LAX aircraft.

Inglewood activist Derek Steele told the Sentinel that the land should be used for more housing instead of arenas, as his comrades shouted “homes not arenas!” in the background.

“We are in a housing crisis in this city,” he said.

“People are being displaced by the thousands by all of the things already happening here, like the stadium development etc… we should be using this public land for good but they are actually giving the land to this billionaire. They’re making sure this billionaire and his billionaire team has a home but they’re not coming up with solutions for regular people who are dealing with displacement in this community.”

Project officials’ claims of providing 30,000 jobs, said Steele, don’t appease him or others concerned about the new developments.

“I don’t know where they got that number. But how are those jobs going to be sustainable for people who want to stay in the city when the rents are going up… The mayor and his regime are trying to get involved with all the billionaires and extract money from this community to go to their companies.”

But, said a spokesperson for the Clippers Arena, “The project will create good paying jobs and will include a local hiring goal for Inglewood residents and surrounding cities. The new arena will also provide more entertainment, public spaces, shops and restaurants for the region to enjoy, while providing safeguards for the environment and the community.

AB 987 requires that a full and comprehensive Environmental Impact Report (EIR) be conducted for the new Clippers Arena Project and ensures it will be subject to the same 270 days for judicial review of any challenge to the EIR, similar to the review period granted to both the Sacramento Kings arena and the Golden State Warriors arena. The Inglewood Arena would be required to be constructed to meet Leadership in Energy and Environmental Design (LEED) Gold certification.

The proposed site is located on the southeast corner of Century Boulevard and Prairie Avenue, about three miles east of LAX.