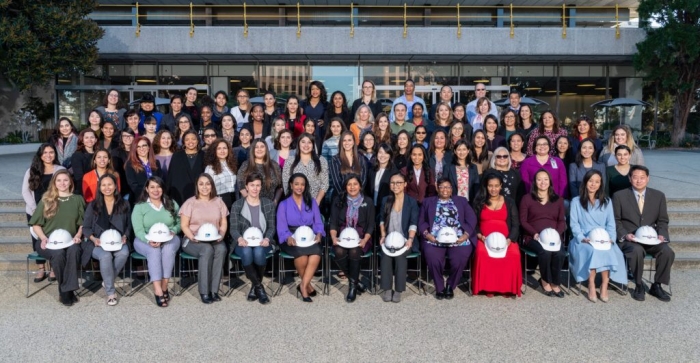 Caption: Members of LADWP Chapter of the Society of Women Engineers. (Photo by Chris Corsmeier)

SAN DIEGO (February 24, 2020) – The Los Angeles Department of Water and Power (LADWP) was honored with two Society of Women Engineers (SWE) “WE Local” awards this month at the WE Local San Diego conference in San Diego, Calif. The Department received the Sustaining Benefactor award, while its LADWP-SWE chapter was selected for the Outstanding Professional Development Event award. WE Local awards recognize outstanding SWE members, groups and individuals and honor regional excellence in empowering women to achieve full potential in their careers as engineers and leaders.

The Sustaining Benefactor award recognized LADWP’s significant and ongoing support to the formation and growth of the internal LADWP-SWE chapter, which was established in March 2018. LADWP-SWE has become a key career development organization within LADWP that counts over 200 employees from 40 different job classifications across its Water, Power and Joint systems among its membership. Leadership at LADWP, from executive management to the Board of Water and Power Commissioners, has also prioritized public recognition of the group in Board meetings to raise awareness about gender equity and the importance of bolstering opportunities for women in underrepresented career paths.

“LADWP is very pleased to support an employee-led organization that is committed to promoting gender equity, diversity and closing the managerial gender gap– values that our utility is also prioritizing through our recruitment efforts and customer program development,” said LADWP General Manager and Chief Engineer Martin L. Adams. “LADWP-SWE’s mentoring and training programs are effectively helping connect members of our workforce to ensure they have the tools to equitably rise up the ranks and succeed.”

In September 2019, SWE also showcased LADWP by honoring Senior Assistant General Manager of Power Engineering, Planning and Technical Services Reiko Kerr with the SWE Spark Award for individuals who have contributed to the advancement of women by mentoring those around them. Kerr is the first woman to lead the Department’s Power System.

LADWP-SWE’s mission is to stimulate employees to achieve full potential in their careers in science, technology, engineering and math (STEM) by providing supportive networking opportunities, mentoring and fostering a culture that recognizes and respects the contributions of all. Though its members primarily come from STEM backgrounds, 13% of participants work in non-STEM related fields.