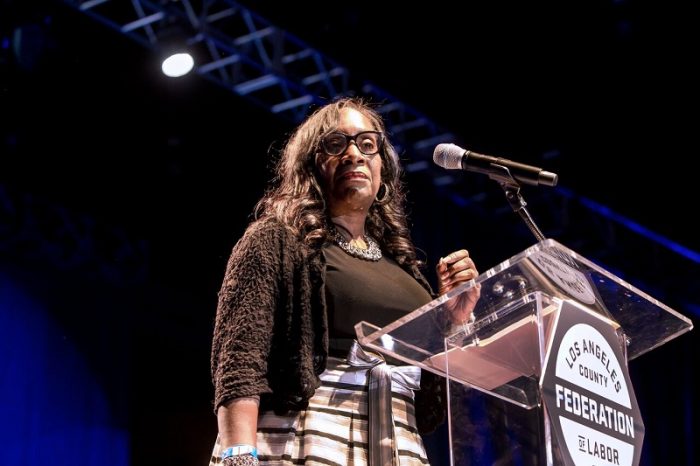 The event kicked off with multi-platinum Grammy award-winning recording artist Faith Evans, singing the National Anthem. Afterwards, she was joined by the West Angeles Church of God in Christ Choir for the National Negro Anthem. 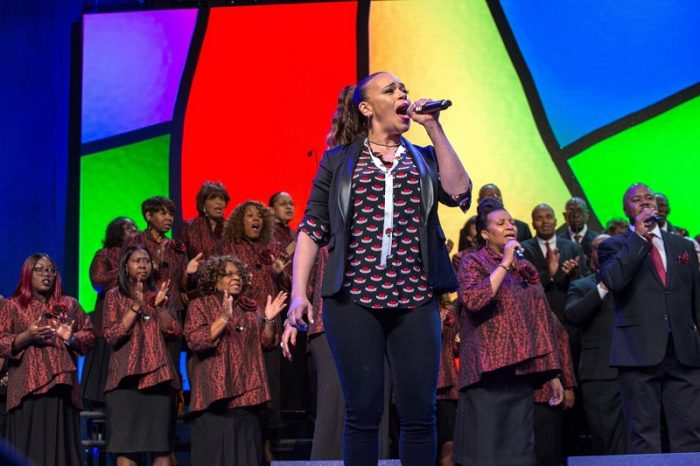 Multi-platinum Grammy winning recording artist Faith Evans is joined by the West Angeles Church of God in Christ choir for the National Negro Anthem “Lift Every Voice and Sing”. Monica Almeida (via the LA County Federation of Labor)

Rusty Hicks, president of the Los Angeles Federation of Labor, AFL-CIO, encouraged the audience by stating, “we’ll help more union workers to run for public office, take back the house in 2018 and send every last anti-working Republican home for good”. He then introduced this year’s keynote speaker Vanita, Gupta, who was head of the Civil Rights Division at the Department of Justice under the Obama Administration and is currently the president of the Leadership Conference on Civil Rights. Gupta stated “we are keenly aware that workers’ rights are about the fight for good and fair jobs that pay a decent wage- jobs that you can raise a family on. The fight is for safe housing, economic security, quality education and strong healthy communities. These are the building blocks of the American dream.”
Another highlight of the breakfast was Time Magazine’s Person of the Year, Long Beach housekeeper Juana Melara, who gave her testimony of how she felt voiceless until Time told her story. She next introduced the popular union leader Maria Elena Durazo, general vice president of Unite Here. Durazo stated “I think Dr. King would be pleased that today’s civil rights movement has grown; grown to defend the Dreamers that Trump continues to threaten, to defend transgender soldiers that Trump wants to reject, to defend women that Trump sexually harassed and assaulted, and janitors and housekeepers. Dr. King said ‘Injustice anywhere is a threat to justice everywhere’.”

Throughout Dr. King’s life, he stood up for union rights. This year marks the 50th anniversary of his death. King died in the midst of a strike of 1,300 Black sanitation workers in Memphis Tennessee. Some 40% of these workers were so poor they received welfare benefits even though they worked 60-hour weeks. Speaking of both sanitation workers in Memphis and the working poor across the country, King said, “You are reminding, not only Memphis, but you are reminding the nation that it is a crime for people to live in this rich nation and receive starvation wages.” King died on April 4, 1968 in Memphis Tennessee. 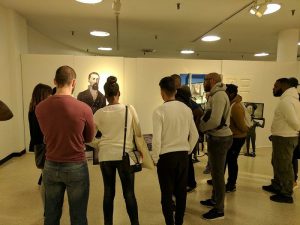