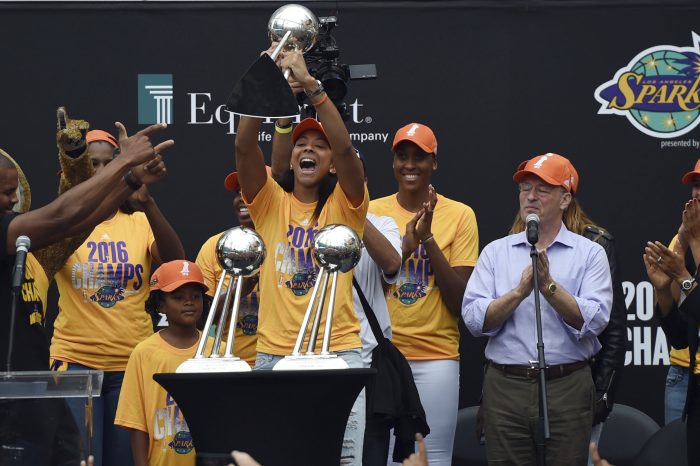 The 2016 reigning WNBA Champion Los Angeles Sparks announced the 2017 preseason schedule, which will feature three games against the New York Liberty, the Connecticut Sun and the San Antonio Stars.

The Sparks and the Liberty will tip off preseason at 5:00pm EST on Tuesday, May 2, at the Mohegan Sun Arena in Connecticut, the Sparks will then play again on Wednesday, May 3 at 7:00pm EST vs. the Connecticut Sun at the same arena. Following their road trip, the Sparks will head home to play their final preseason game against the San Antonio Stars on Saturday, May 6 at 7:00pm EST, location to be announced.

Three-time WNBA Champions, the Sparks won back-to-back WNBA titles in 2001 and 2002 and added their third title this past season in 2016. The Sparks have qualified for the postseason, a WNBA record 16 times. Led by WNBA 2016 Finals MVP Candace Parker, WNBA MVP Nneka Ogwumike, Sixth Woman of the Year Jantel Lavender and First Team All Defense Alana Beard, the Sparks will look to match the league record of four League Titles set by the Houston Comets.

The 2017 Sparks regular season will tip-off May 13 at 2pm, presented by EquiTrust. The home opener will feature the Championship Ring Ceremony. For ticket purchasing and information for the 3 time champion LA Sparks, call 844-GO-SPARKS, email [email protected] or visit LASparks.com. The LA Sparks can be found on all social media outlets at @la_sparks.