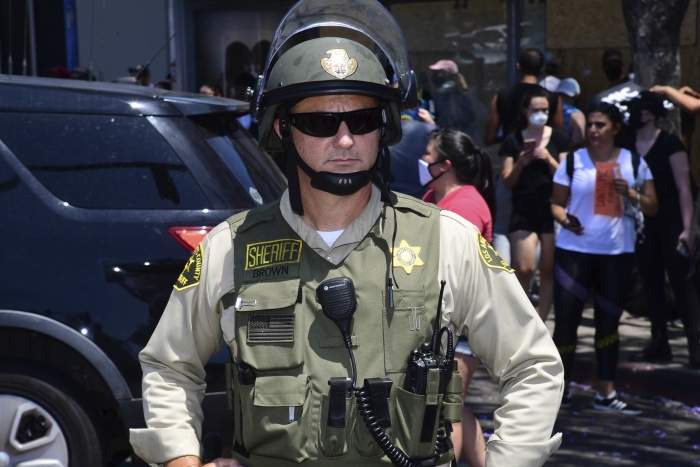 Los Angeles County Sheriff’s Dept. officer stands guard in riot gear on Santa Monica Blvd. during a protest over the death of George Floyd organized by the LGBTQ community in support of Black Lives Matter, Wednesday, June 3, 2020, in the West Hollywood section of Los Angeles. Protests were held in U.S. cities over the death of Floyd, a black man who died after being restrained by Minneapolis police officers on May 25.( Kirby Lee via AP)

The Los Angeles County Board of Supervisors voted today to transfer $25.5 million to the Sheriff’s Department to fund the roll-out of body-worn cameras to patrol deputies over the next year.

The board had set aside $35 million for the cameras without releasing that money to the department. Supervisors Janice Hahn and Kathryn Barger co- authored a motion calling for a transfer of funds sufficient to cover the first year of operations.

“Body-worn cameras are an important tool for transparency and I have been advocating to get them to our sheriff’s deputies since Sheriff Jim McDonnell was in office,” Hahn said. “The videos these cameras capture will give us a clearer understanding of what actually happens in the interactions between our deputies and members of the public.”

In fact, the first pilot of body cameras by the Sheriff’s Department in 2014 predated Hahn’s election to the board, as well as Sheriff Alex Villanueva’s tenure. The sheriff has blamed his predecessor and the board for spending too much time reviewing the problem and potential solutions, while board members have pointed out that the sheriff has had control of the

procurement and implementation process. It is just one of many public disagreements between Villaneuva and the board.

Hahn said the transfer would allow the department to move forward without any “extra red tape.”

The value of video footage couldn’t be clearer at a time when protesters nationwide have been enraged into action by the images of George Floyd, a 45-year-old Black man, fighting to breathe while held down by the knee of a white Minneapolis police officer now charged with murder.

“These body-worn cameras, they don’t solve everything, but they put a lot of things in perspective,” Supervisor Mark Ridley-Thomas said.

Earlier this month, the department finalized an agreement with Axon Enterprise Inc. to equip more than 5,200 deputies and security officers with cameras. Villanueva said in a statement on the LASD website that the full roll- out would take 18 months and begin in October, with equipment going first to deputies at the Lancaster, Century, Lakewood, Industry and West Hollywood stations. Compton, East Los Angeles and another eight stations will follow beginning in January, according to Hahn.

Unions have also been part of the process, ratifying a policy for gathering and using the footage. A copy of that policy, marked “pending,” is available on the LASD website, but the Office of Inspector General and Civilian Oversight Commission have recommended changes.

The LASD policy “largely mirrors” that of the Los Angeles Police Department, which rolled body cameras five years ago, according to a June report by Inspector General Max Huntsman. However, where it diverges, it favors deputies, Huntsman said.

“There are concerns that the policy grants supervisors and deputies too much discretion in deciding when to turn on or off a body-worn camera and that there is no real accountability for a deputy failing to activate the body- worn camera,” according to the OIG report.

Routine audits to identify misconduct are prohibited by the policy. It also encourages deputies to review video footage before writing reports, leading the OIG to point to “grave concerns” by the public defender and alternate public defender about deputies fabricating details about what happened.

Questions about when and how to release recordings to deputies and the public, as well as how to pay for storing and managing extensive amounts of data, were responsible at least in part for the delay in getting cameras in operation. The LAPD struggled through the same issues.

Though the LAPD initially kept recordings for internal use, the department revised its policy in March 2018 to require public release of video from “critical incidents,” such as police shootings, within 45 days.

In high-profile cases, the LAPD has acted more quickly. For example, in the 2018 shootout at a Trader Joe’s in Silver Lake — where store assistant manager Melyda Corado was killed by an LAPD bullet during an exchange of gunfire between police and a man suspected of shooting two other people – LAPD Chief Michel Moore released bodycam video three days later.

The sheriff’s department’s posted policy states it will release video in response to a public records act request unless it would interfere with an investigation, in which case the release may be delayed for up to 45 days. In the event that the department decides at the end of that period that it would still substantially interfere with an active investigation, the sheriff could hold the footage for up to a year, or even longer if “clear and convincing evidence” of such potential interference remains.