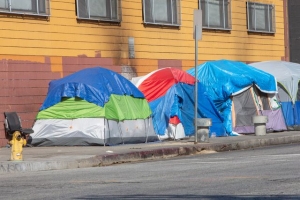 While some might debate if shelter is a basic human right, you'd be hard pressed to find anyone who would argue that it isn't essential to an individual's quality of life. And in California, where just about every aspect of the nation's housing crisis is on full display, housing laws become all the more consequential. Especially during a global pandemic. ... read more »
LAPD Partners with PVJOBS to Give Away Toys and Food to 1,000 South Los Angeles Residents 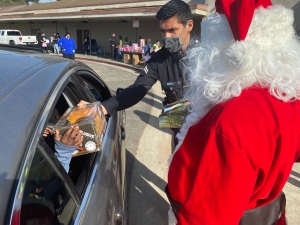 To help uplift spirits during the Christmas season, PVJOBS partnered with the Los Angeles Police Department (LAPD) on Saturday to give away toys and food to about 1,000 community members in need. Co-sponsored by PVJOBS, the toy and food drive took place at the South Park Recreation Center in South Los Angeles and was coordinated by the LAPD’s nearby Newton Division. ... read more / view gallery »
L.A. County Board Funds Body-Worn Cameras for Sheriff’s Deputies 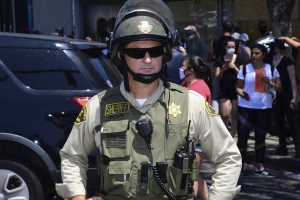 The Los Angeles County Board of Supervisors voted today to transfer $25.5 million to the Sheriff's Department to fund the roll-out of body-worn cameras to patrol deputies over the next year. ... read more »
ADVERTISEMENT
Garcetti: City Won’t Hesitate to Close Businesses Ignoring Coronavirus Orders 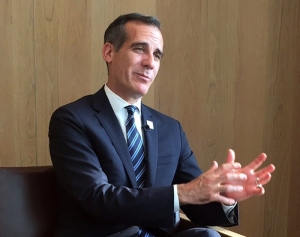 The Los Angeles City Council called on its police and transportation agencies today to develop a list of possible fines the city should impose for infractions by riders of e-scooters or dockless bicycles. ... read more »
1992 UPRISING: MUCH MORE STILL NEEDS TO BE DONE

Mainstream media, in particular, tended to soft-pedal the long range outcomes of the 1992 uprising, i.e., “riots.”  Citing groups like the Community Coalition and Koreatown Immigrant Workers Alliance, it emphasized some things had been accomplished. Few would disagree. However, the coverage represented a familiar glossing over of the lack of progress for fundamental change in South Central Los Angeles (SCLA). In 1992, even descriptions of participants themselves were often misleading- Blacks and Koreans were frequently referred to as the primary participants, actually, Latinos too were heavily involved and far more Latinos were arrested than Blacks.   ... read more »
Los Angeles Board of Airport Commissioners Approves Modernization of Los Angeles Airport Police’s Dispatch and Record-Keeping Systems

In accordance with LAWA's strategic goal of innovating for security, efficiency and effectiveness, the new CAD and RMS system will modernize APD's dispatching and records retrieval systems, allowing the division to respond rapidly to situations with a reliable and quick connection to intelligence information and other first-responder agencies. ... read more »
ADVERTISEMENT
Videos
Student Athlete of the Week: Zsateau Bouyer