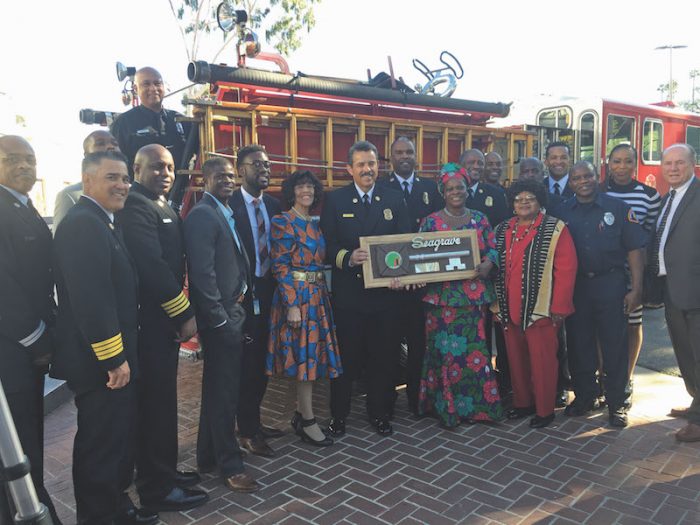 Zambian First Lady Esther Lungu, center, joins L.A. city and county officials and firefighters on Jan. 25, in front of one of the donated fire engines that will be shipped to Zambia. (Cora Jackson-Fossett/ L.A. Sentinel)

Mrs. Esther Lungu, the first lady of the Republic of Zambia, visited Los Angeles last week and the city’s Black community rolled out the red carpet to honor her at two memorable events.

During a formal presentation to Her Excellency Lungu on Jan. 25, Los Angeles city and county officials donated four fire apparatus to the African city of Lusaka, Zambia.

According to L.A. Fire Commissioner Jimmie Woods-Gray, the contributions were a result of collaborations between the L.A.F.D., L.A. County F.D., the city and county Stentorians and the Los Angeles-Lusaka Sister City Committee.

Lusaka, one of the largest cities and the capital of Zambia, is the only African city that has a sister city relationship with L.A.

“The sister city committee raised funds to help transport the equipment to Zambia, but we owe a debt [of gratitude] to County Supervisor Mark Ridley-Thomas, Mayor Eric Garcetti, L.A. Council President Herb Wesson and L.A. Councilmembers Curren Price and Marqueece Harris-Dawson, who were also instrumental in financing the shipping,” said Woods-Gray, who served on the project planning team.

Bringing the project to fruition took about a year, Woods-Gray explained, and the team met regularly on the logistics. She commented that the Stentorians would train five firefighters from Zambia on operating the trucks, as well as host the Zambians in their homes and tour them around Los Angeles.

In response to the gift, First Lady Lungu expressed thanks on behalf of Zambia and cited the “cooperation of city, state and federal institutions in the fire, paramedic and rescue services.”

She added, “I wish to assure the LAFD that the apparatus donated to our country will be put to good use and we will take care of it because it is for the benefit of the people, whom I want to live peaceful lives.” 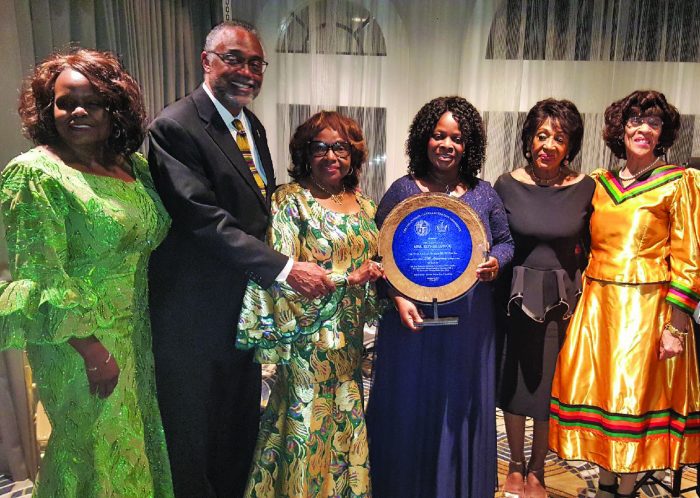 In addition, Lungu was the honored guest at a VIP dinner on Jan. 26, at the Beverly Wilshire Hotel.  Hosted by Los Angeles African American Women Political Action Committee (LAAW-PAC), the black-tie affair was held to support the cost of shipping the fire apparatus back to Zambia.

“It is just an honor to be a part of what the Stentorians and the L.A.-Lusaka Sister Committee had already started by providing the fire trucks.  We’ve been able to assist them with the shipping costs because it’s part of what we do in Los Angeles. It proves that we’re not just a U.S. city but we’re a global city,” said Ingrid Palmer, LAAW-PAC president.

The occasion offered another opportunity, explained Celestine Palmer, LAAW-PAC founder, who said, “The dinner exposed the African American diaspora to the first lady of one of the African countries. In this globalized economy, we forget about doing business with the African continent. So, this is our outreach to Americans businesses to enter into conversations with leaders, consulates and businesses in African countries.”

The Rev. Kelvin Sauls, who served as emcee at the event, introduced the program participants, which included the Rev. Judi Wortham-Sauls, Kerstern Malama, U.S. Congresswoman Maxine Waters, Councilmembers Wesson and Price and Dr. Thomas-Robertson.  The evening concluded with remarks by First Lady Lungu.

Regarding the potential for future support from Los Angeles to its sister city, Thomas-Robertson said, “What we have done in respect to fire apparatus for Lusaka, perhaps can be done for the entertainment industry and market in Zambia. If there is equipment that some of our Hollywood studios are not using anymore, we’d like to take some of that to Zambia.

“Their entertainment industry is now growing and we have young people – master’s degree graduates of USC’s School of Film – who are anxious to do documentaries about Zambia and that equipment from the studious will be beneficial,” she said.

“So, it’s a gain.  It’s about promoting the inter-dependency and nature of our world. If we all understand it and embrace it, it makes for a greater peace. It’s a small world, but we’re a big family!”