In January when Governor Newsom briefed Californians on his 2020-21 Budget, he said the state’s investment in K-12 education was making progress, “it is stubborn and slow.”

According to Newsom, “It seems self-evident that we should focus and concentrate our efforts in those areas in order to address … the substance of the vexing issue as it relates to academic achievement for our African American students.”

To close the Black student achievement gap Newsom talked about plans to build a diverse teaching workforce of stable prepared professional teachers including more teachers that look like their students. “That’s incredibly important as related particularly to African American achievement.”

He announced $900.1 million was being proposed to be invested in workforce investment grants, professional development grants for existing teachers, and teacher recruitment strategies.

But, a few weeks after his budget briefing, the Department of Finance released the “omnibus education trailer bill” detailing Newsom’s education funding proposals and there was no specific funding designated to help African American students or any reference to sourcing more African American teachers.

Last week, the Legislature began its review of the education budget. In advance of the hearings the Legislative Analyst’s Office (LAO) issued a report assessing the governor’s proposals for K-12 education.

LAO found that although the budget proposes funds to address longstanding challenges in K-12 education, many of the initiatives fail to align with the state’s existing efforts to address achievement gaps and enhance the education workforce. Also, the proposals provided little detail about how the funds would be spent, making it difficult for them to assess how effective they might be. 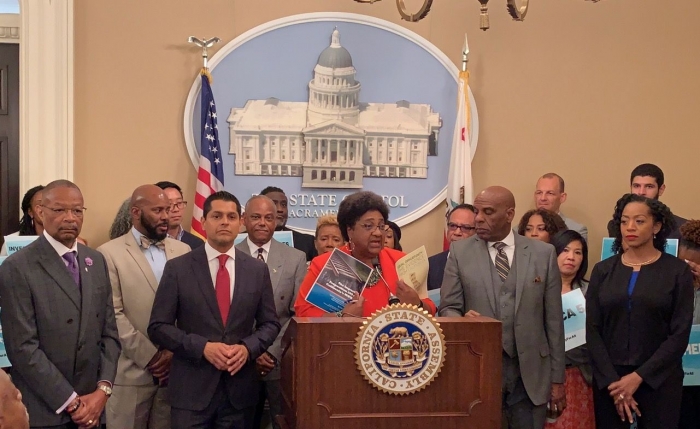 Consequently, LAO recommended that the Legislature reject most of the governor’s proposals and use the $1 billion in freed up funding to provide fiscal relief to school districts. They proposed that the funds be used for additional payments toward districts’ unfunded pension liabilities.

The fact is LAO shouldn’t be faulted for their recommendations, because “God is in the details” and Newsom’s education budget proposals failed to provide them. You don’t have to be a genius to conclude that if the governor wants to help African American students close the achievement gap then his budget proposal should state it directly.

State Superintendent of Public Instruction Tony Thurmond was invited to speak at the Legislative hearings.

Thurmond also admitted that “So many of the things that are in the budget aren’t spelled out, but we’re working closely with the governor’s office and the Department of Finance to put specifics in place ……”

The Legislators raised concerns that school districts are facing increasing fiscal challenges and that more funds should be directed to address those concerns. They also acknowledged that closing the achievement gap was warranted but never raised the need for specific funding proposals to help African American students.

Not specifying funding targeting help for African American student could be attributed to concerns about violating Proposition 209. This initiative voted by the people in 1996 prohibits state governmental institutions from considering race in public education.

Assemblymember Shirley Weber (D – San Diego) twice proposed legislation, AB 2635 and AB 575, which would have directed LCFF funding to Black students. Both times, concerns about violating Proposition 209 were raised and the bills failed.

The local control funding formula (LCFF) provides a base grant of funds to all school districts and additional funds based on the number of low-income children, English learners, homeless students and foster children who attend.

The governor’s education trailer bill essentially relies on the same student targets as LCFF. So if the intent is to help African American student succeed, then Newsom’s proposals need to say it and not finesse the wording.

If Prop 209 is an impediment to approving funds to close the achievement gap for African American students, then Newsom has a chance to work with the Legislature on passing ACA 5 the California Act for Economic Prosperity to repeal Proposition 209  and convincing California voters to approve it.