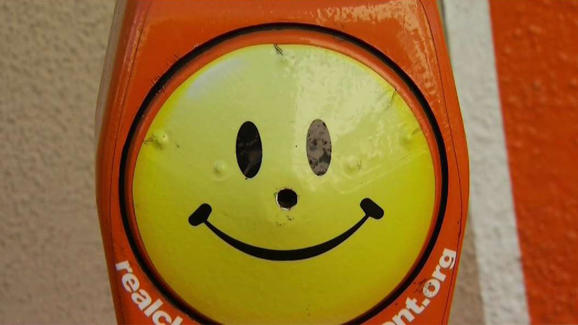 A new meter, located in Grand Park away from the street, allows people to give loose change or use their credit card for donations that go to an organization which helps homeless people in Skid Row. (Courtesy Photo)

The meter, which looks similar to a parking meter, but is bright orange in color and located in Grand Park away from the street, allows people to give loose change or use their credit card for donations that go to an organization which helps homeless people in Skid Row.

The donation meter was one of two that started operating in Grand Park and among six planned for the downtown area in the coming weeks.

“We know that many people want to help, considering the homeless crisis that we have at this time,” Huizar said. “And oftentimes we get approached by somebody asking for change and it crosses our mind whether we should help them or not — are we feeding their addiction? So having a donation meter will allow people to have an option knowing that the money is going to an organization directly assisting individuals.”

The program was designed by Huizar’s office along with the Flintridge Center, and is based on the center’s Real Change Movement, which has similar programs in Pasadena and West Palm Beach, Florida.

Funds collected at the meters and from $3,500 sponsorships of each meter will go to the People Concern, a non-profit that is a lead provider for the City County Community (C3) program in the Skid Row neighborhood that offers services to homeless people.

Huizar’s and Solis’ offices are sponsoring the meters in Grand Park, and the other sponsors are the Alexandria Hotel, Hayward Manor Apartments, St. Vincent Jewelry Center and El Pueblo Historical Monument.

Huizar said the program was being organized through he and Solis’ office but that they hoped to turn it over to a city or county department so “that it has a more formalistic, institutionalized approach.”

John Maceri, executive director of The People Concern, said the money from the meters “are really going to impact people’s lives, with the ultimate goal of moving them indoors into stable housing.”

The IPS Group donated the meters and will be the contractors on the project that the Los Angeles Department of Transportation will work with while coordinating their operation.

The meters have been placed on private property in “highly visible” areas because the city has some contractual obligations with companies that put up bus stops and other public sponsorships, Huizar said. Grand Park is owned by the county but managed by the Los Angeles Music Center.

“People know that it’s a simplistic way to give. It’s not hard, and I think it will move people’s hearts. In fact, my vision is to hopefully see these meters throughout the county,” Solis said.

According to the Fintridge Center, the meters in Pasadena that were placed in 2014 generated $4,000 in donations their first year, with the United Way matching the donations.

Los Angeles does not yet have an organization matching donations, but Huizar said he hoped one could be found.