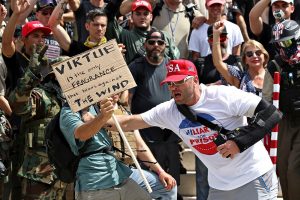 Kevin Kamath, left, and Kyle Chapman, right, get into an altercation at the Texas State Capitol during a march against President trump calling for his impeachment Sunday, July 2, 2017, in Austin, Texas. (Joshua Guerra /Austin American-Statesman via AP)

Since the election of Donald Trump in November, media reports show a spike in incidents of racism and hatred around the country. Many say that Trump’s victory gave free license to those who harbor racist attitudes, and that his presidency allowed them to express views they might otherwise have kept to themselves.

This reporter put the question to followers on Facebook: “Have you or anyone you know experienced any incidents of racism or hatred since the beginning of the year, and/or do you think or perceive that hatred in the country has increased since Pres. Trump took office or not?”

Participants were asked to respond either yes or no, but were not required to cite any specific incidents or experiences. Of the 36 responses – from a group that included teachers, social workers, law enforcement, stay-at-home moms, artists, and students – the answer was a resounding yes.

“I find that random white people seem to be perfectly comfortable expressing nasty, racist opinions to me. Usually said with a smile.  I’ve had several incidents since the election. This despite the fact that I’m known as ‘the angry black woman.’ Or perhaps because of that,” stated one of the responders, a public relations/marketing tech.

According to the entrepreneur, micro-aggressions in the work place have increased.  Her daughter, for instance, is in her mid-20’s and is currently working in her first professional job out of college, in what her mother describes as a fairly white company. “Every day, she talks about people who say things like, ‘Really!?  Your degree is in marketing? I didn’t think Black people went into that kind of field,’” she said.

“Just stupid, ugly stuff, not to mention the comments that you get at work and those kinds of places in the public sphere,” she said, adding that a few years ago, people may have been more circumspect about what they let pop out of their lips.  “And then sometimes, there’s just absolutely heinous hate speech,” she added.

Hate related incidents – including the leaving of nooses in public spaces – have spiked across the country since November. According to the Center for the Study of Hate and Extremism at California State University, San Bernardino, there was a 5.4 percent increase in hate crimes between 2015 and 2016. African Americans and Muslims were among those most often targeted. 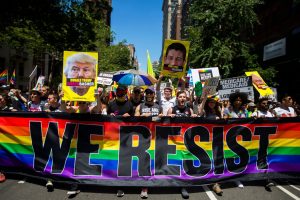 Members of Resist, a foundation that supports people’s movements for justice and liberation. protest President Donald Trump and other politicians as they march during the New York City Pride Parade on Sunday, June 25, 2017 in New York. (AP Photo/Michael Noble Jr.)

Another responder, a middle school teacher in Oakland, said she has noticed a marked changed in attitudes among her students since Trump’s election, especially when it comes to gender issues.

“You have more machismo, as if there wasn’t enough,” she said. She noted a new and troubling trend among students, “something called ‘Slap A— Fridays,’ where girls know that at some point on Friday afternoon, they are going to be physically assaulted, and it’s supposed to be a right of passage or just something that ‘boys do’ that’s generally accepted on the playground,” the teacher remarked.

During the campaign, video emerged in which Trump could be heard making statements that many took to be an admission of sexual harassment. More recently he raised hackles by going after MSNBC host Mika Brzezinski, tweeting that she had been “bleeding badly from a recent face lift.”

Many worry that as with racial attitudes, the president’s remarks send a signal from the highest office in the country that such behavior toward women is acceptable.

The teacher has also noticed increased fear in her female Muslim students. “These babies are afraid.  My young 6th, 7th, and 8th grade Muslim sisters are choosing not to wear their hijabs to school anymore, because they know they have to walk the same streets … ride the same bus that everybody has to get to school, and they have faced increased ridicule,” she stated.

She said she tries to help alleviate her students’ fears by allowing them a space to open up about what they’re facing and discuss solutions.

Many describe the challenge of having to “grapple with puberty and studying and being in this middle part of my life where high school is looming … and I’m living in an area where I walk through trash to get to school each day.” Her students, she wrote, have enough on their plate without having to worry about whether or not they will be targeted for their race or religion.

She concluded that while social media has been a central platform, both in spreading hate and in mobilizing against it, she prefers the devil she can see versus one that hides behind keyboards.

“I personally don’t have a problem with free speech. I want you to be as free and nasty and trifling as you need to be, because it’s easier to fight a disease that’s out in the open,” she stated.

Other responders shared reports of conditions locally. One, a labor activist, highlighted this My News L.A. story about an Orange County Human Relations Commission report, which indicated a countywide spike in hate crimes since Trump’s election.

Another responder noted the nooses that were found on the waterfront in Oakland where Longshoremen work.  “Yes.  It’s been three occasions … the majority of the workers are Black,” he stated.

According to news reports, nooses and racist epithets were found at the Oakland International Container Terminal, prompting longshoremen to walk off the job on May 25, 2017. Similar incidents involving nooses have been reported at the National Mall and the National Museum of African American History and Culture in Washington D.C.

The lone “No” response was sent by a woman who chalked up her experience to the fact that she looks “too mean in the street.”

But another woman noted that she almost never responds on Facebook, but that given the current climate, she was moved to do so. “I rarely response on FB. But, yes to your ?” 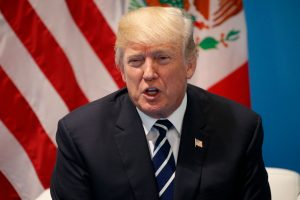