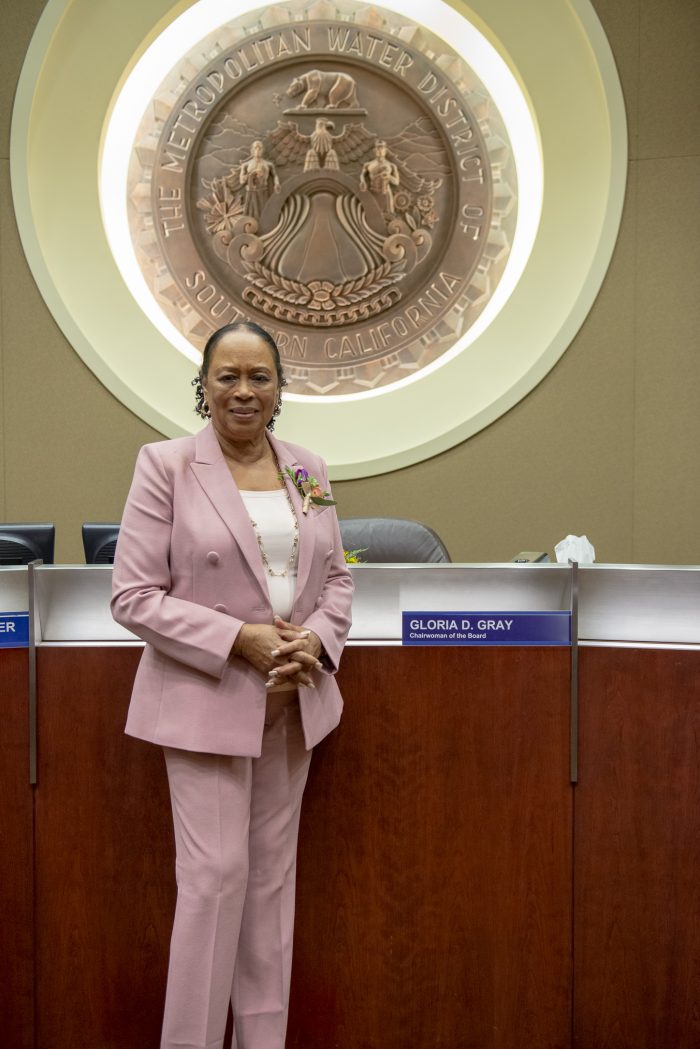 Gloria D. Gray has added another “first” to her extensive public service career, as she becomes the first African American elected to chair the Board of Directors of the Metropolitan Water District (MWD) of Southern California.

Her two-year term, which began Jan. 1, marks only the second time that a woman has led the 90-year-old agency that, together with its member agencies, delivers water to 300 cities and unincorporated areas in Southern California.

Being the “first” is old hat for Gray, who achieved similar status at MWD before ascending to chair.  Previously, she served as the board’s first African American woman vice chair, which made her the first Black woman to direct a MWD board meeting. In 2017, she became the first African American woman to chair the board’s Water Planning and Stewardship Committee, a key group that focuses on MWD water projects and programs.

Gray’s litany of “firsts” actually began when she was elected in 2006 to the West Basin Municipal Water District Board of Directors  – the first in its 66-year history – and in 2010 with her appointment to the Delta Stewardship Council by then-Assembly Speaker Karen Bass.  In the former position, she was the first Black woman to serve and in the latter, she was the first African American. 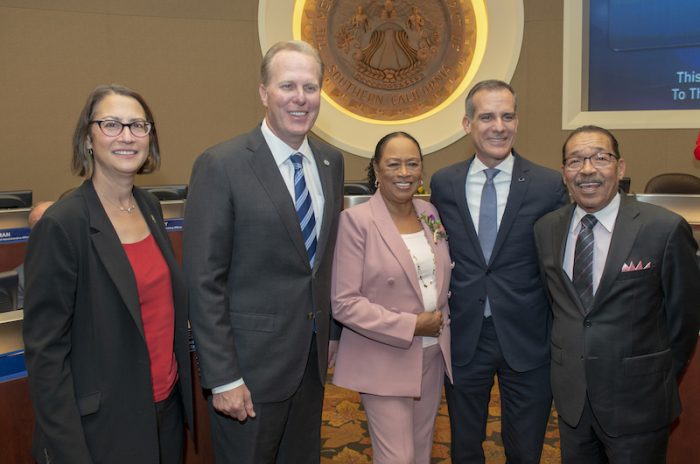 While making history is significant, according to Gray, she is much more excited by her increasing potential to aid the 19 million people who depend on MWD to provide reliable and high-quality water supplies. The district operates across a 5,200-square-mile service area that encompasses residents and businesses in Los Angeles, Orange, San Bernardino, San Diego and Ventura counties.

Her long tenure in water, combined with her passion for community involvement, enables Gray to bring a different perspective as head of the 38-member board, where she also serves as MWD’s representative to the Association of California Water Agencies and on the Santa Monica Bay Restoration Commission.

“My background is totally different than the average person in water,” said Gray in an interview with Bloomberg Environment News. “I think I represent more diversity in the community. I represent the average ratepayer. I know the issues of a working-class person.” 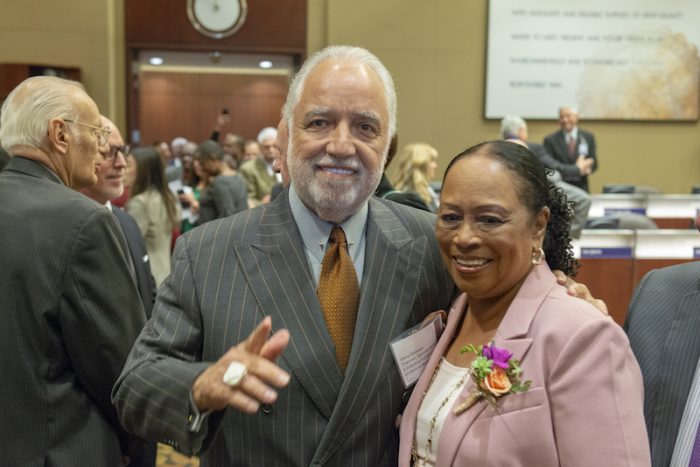 Her experiences and commitment help to reassure that the impact on everyday citizens will be considered as MWD deals with water supply and climate change challenges on both of its imported water sources from Northern California and the Colorado River.  Gray said she aims to employ an “open and transparent decision-making process” that informs, educates and assists customers and agency partners.

“We must increase public outreach in collaboration with retail water agencies, particularly to low-income communities, to ensure they have access to the programs we provide,” insisted Gray, who added that a new MWD pilot program offers rebates for high-efficiency toilets installed in multi-family housing to boost water savings in disadvantaged communities.

“We hope to learn from the program so that we can identify how to best optimize water conservation throughout our large and diverse service area,” she said.

Gray is no stranger to dealing with “large and diverse” areas.  Prior to her election to the West Basin Board, she worked for 36 years as a healthcare administrator at the L.A. County Department of Health and Human Services. An Inglewood resident, she also served from 1995 to 2003 on the board of Inglewood Unified School District and is a former executive board member of the L.A. County Democratic Party Central Committee 51st Assembly District.

“My career gateway was at the Department of Health Services. I started as a stenographer and steadily worked my way up the ladder to healthcare administrator, earned my bachelor’s degree in business administration from the University of Redlands, my Health Services Management Certificate from UCLA, and my Master’s in Governance Certificates from both the California School Boards Association and the Special Districts Board Management Institute,” recalled Gray.

“I learned to face and overcome challenges by never giving up. Each job opened my eyes to the world around me. I also began to appreciate the importance of public service and how it takes action and involvement to make our community a better place.”

Her involvement with community organizations is varied as well.  She is the co-founder and past-president of the Black Health Services Action Committee and the Black Organizations Alliance. Affiliated with SEIU Local 721 for more than 30 years. Gray also served on a range of the boards including Charles Drew University of Sciences and Medicine, Maxine Waters Employment Preparation Center, PV (Playa Vista) Jobs, Southwest Community College, South Bay Workforce Investment Board, Inglewood Leadership Council, LAX Area Community Advisory Committee and Inglewood Chamber of Commerce.

In addition, she represents a large multicultural constituency on the West Basin Board. As the Division II Director, Gray’s area comprises Inglewood, South Ladera Heights, Lennox, Athens, Howard and Ross-Sexton – communities that are comprised of a range of ethnicities.

Noting the diversity and community theme streaming throughout her career, Gray expects to continue to employ those qualities in her role as MWD board chair and urged the public to get more involved, too.

“The water community is a much more diverse place than it used to be and so there is more opportunity than ever to get engaged. I am proud to say that Metropolitan’s commitment to cultural, ethnic and gender diversity has never been stronger,” said Gray.

Gray’s multitude of water-related and community service activities have resulted in numerous awards and commendations for her. Her accolades include the Honorable Harriet Wieder award from the Southern California Water Committee for her environmental leadership, the “Women in Action Award” from the Los Angeles African American Women’s Public Policy Institute for being as a role model for young women, the Outstanding Women of 2012 award from the Gardena Chamber of Commerce, and the Black Woman Achievement Award from the NAACP Legal Defense Fund.  In addition, she has received proclamations and certificates for her work from scores of local, state and federal elected officials. 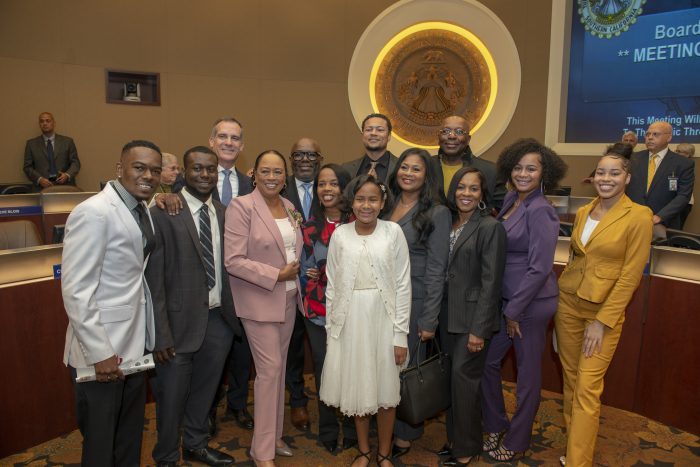 The festive ceremony included remarks by philanthropist and L.A. Sentinel Executive Publisher, Danny J. Bakewell, Sr., who commented about his long relationship with Gray in working on social justice and economic equity issues.

“Gloria is a shining example of a woman whose commitment and vigilance in helping Black people and people everywhere has been a tremendous benefit to the community,” said Bakewell, who has been a friend with Gray for decades and collaborated with her on several community campaigns.

Gray’s family was among the well wishers and she took time to acknowledge their support during her installation address.

“I’m delighted to have so many of my family and friends to witness this special occasion. I am eternally grateful to all of you,” said Gray who gave shout-outs to her daughters and sons-in-law, Monica Ector and Michael Ector and Denise and Kevin Mitchell as well as her significant other, Leonard Tibbs; her sister, Winnie Smith of Atlanta, Georgia; nieces, Barbara and Shanay Lavelle and Peg Fobbs; nephew, Larry Fobbs; cousins, Daniel and Tony Willis; and extended family, Arbra and Judy Gray, Tiffany Kennedy, Rotundra Green, Cora Blanton Noble and Quentin Blanton.

As Gray prepares for her new role as MWD chair, she shared her vision for the agency’s future under her command.

“I know I cannot do this job alone. It will require all of us working together. I look forward to leading you and I am humbled by this opportunity.”