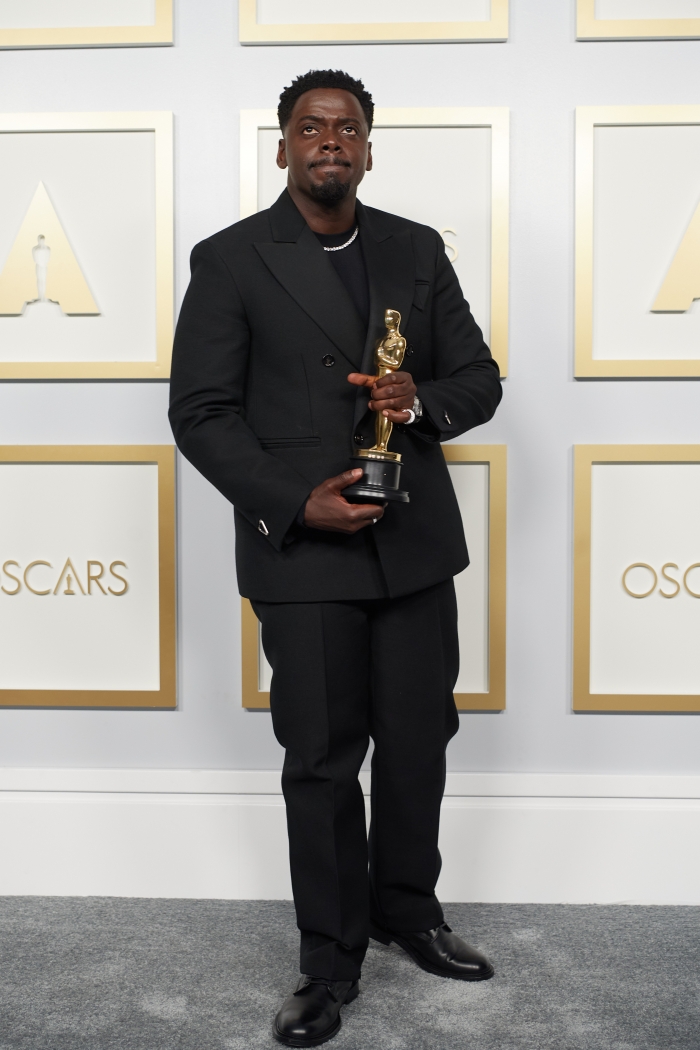 Daniel Kaluuya poses backstage with the Oscar® for Best Actor in a Supporting Role during the live ABC Telecast of The 93rd Oscars® at Union Station in Los Angeles, CA on Sunday, April 25, 2021.

The biggest surprise was that the late, great actor, Chadwick Boseman, did not win an Oscar, posthumously. Those that did win, after death, were Peter Finch (“Network”) and Heath Ledger (“The Dark Knight Rises”). Mr. Boseman died after a private battle with colon cancer last year at the age of 43.

I will not lie. There was an audible gasp of surprise heard inside the virtual pressroom when it was clear that Mr. Boseman did not win for his mesmerizing performance in “Ma Rainey’s Black Bottom.” Boseman did win the SAG Award, the Critic’s Choice Award, and a Golden Globe, to name a few.

But as they say in Hollywood — the show must go on and it did. The Hollywood creative team did not allow COVID-19 to get in their way. The annual salute to excellence in film started with a bang, last Sunday, with strict pandemic precautions firmly in place. Keeping safety first on their minds meant that thousands of heavy-hitter movie stars and powerbrokers were missing from the guest list. 2021 was only nominees, presenters, and a few guests allowed at Los Angeles’ Union Station, a shift from the massive Dolby Theatre. The intimate (but safe) design was overseen by David Rockwell and the 1939 train station gave a very different backdrop. Sunday night’s Oscars ceremony was historic in more ways than one, making the 441-day wait for the 93rd Academy Awards well worth it. 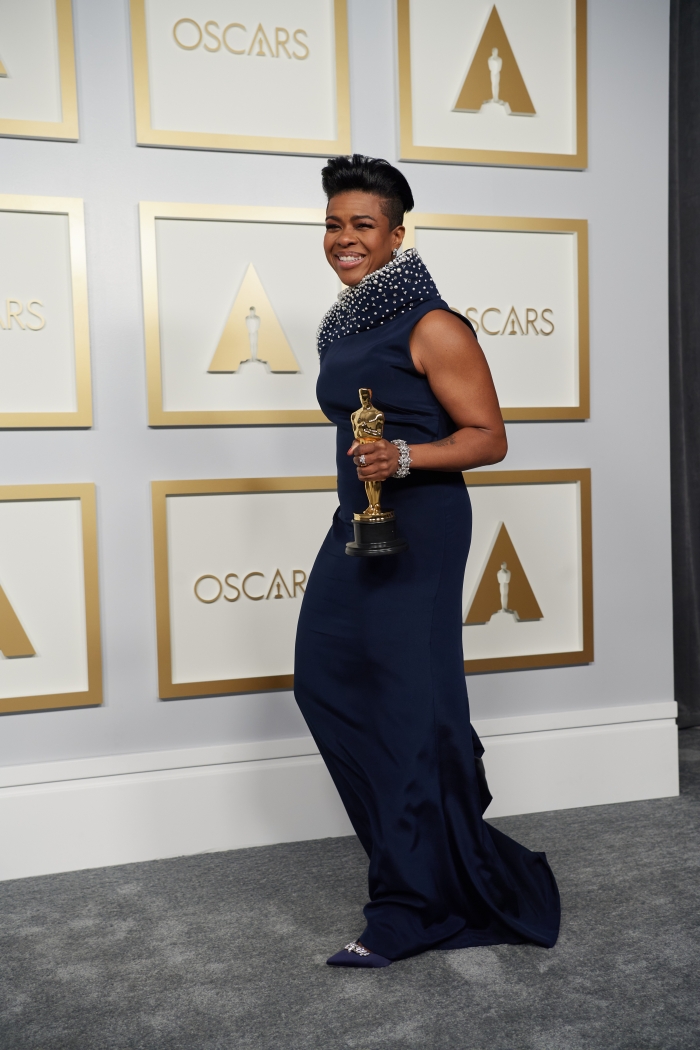 Mia Neal poses backstage with the Oscar® for Makeup and Hairstyling during the live ABC Telecast of The 93rd Oscars® at Union Station in Los Angeles, CA on Sunday, April 25, 2021.

“Minari’s” Yuh-Jung Youn claimed Best Supporting Actress, stepping into the history books as the first Korean actor to do so.

Daniel Kaluuya won the Academy Award for Best Supporting Actor for “Judas and the Black Messiah” for his amazing portrayal of Black Panther Party chairman, Fred Hampton, in a film by Shaka King. This marks his first Oscar win and second nomination, the previous in 2018 in the best actor category for Jordan Peele’s “Get Out.” 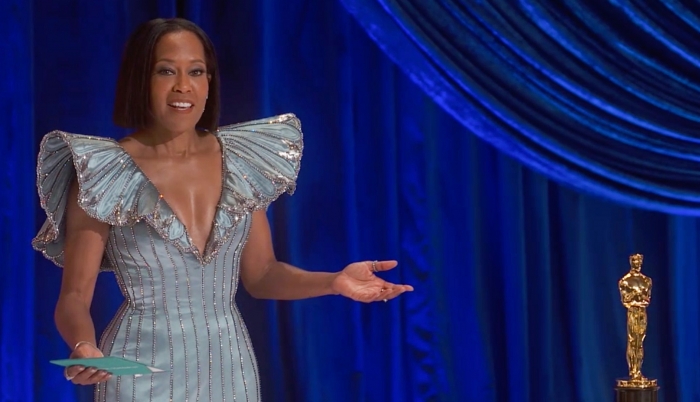 THE OSCARS® – The 93rd Oscars will be held on Sunday, April 25, 2021, at Union Station Los Angeles and the Dolby® Theatre at Hollywood & Highland Center® in Hollywood, and international locations via satellite. “The Oscars” will be televised live on ABC at 8 p.m. EDT/5 p.m. PDT and in more than 200 territories worldwide. (ABC/AMPAS)
REGINA KING

Also walking into the history books is “Nomadland’s” Chloé Zhao who made history, becoming the second woman and the first woman of color to win an Oscar for Best Director. The film also won Best Picture.

A segment of Kaluuya’s acceptance speech (about his parents having sex) has already been turned into a meme. But on a serious note, during his speech, he thanked the cast, crew, and producers behind “Judas and the Black Messiah,” and Kaluuya paid tribute to Hampton and the entire Black Panther party.

Here is what winners of the 2021 Oscars had to share in the virtual press room.

“Thank you, God. Thank you, God. I can’t be here without your guidance and your protection. I’d like to thank my mum. Thank you so much for pouring into me. You gave me everything. You gave me your factory settings. [laughter] So, I can stand at my fullest height. Um, love to my sister, love to my niece, my friends, my family, everyone I love, from London Town to Kampala. I’d like to thank my team, incredible support. Bro, we out here, yo. Man. Man. It’s good, come and dance. Ryan, Zinzi, Sev, Proximity, everyone at Proximity. Charles King, man, everyone at MACRO, Bron, Participant. Nigel. Everyone at Warner Brothers.”

“Chairman Fred Junior and Mama Akua, thank you so much for allowing us into your life and into your story. Thank you, thank you for trusting us, you know, with your truth. I appreciate you deeply and it’s an honor to partner up and stand side-by-side with you. And to Chairman Fred Hampton. Bro, man. Man, what a man. What a man. How blessed we are that we lived in a lifetime where he existed. Do you know what I’m saying? I like to thank you for your light. He was on this earth for 21 years, 21 years, and he found a way to feed kids, breakfast, educate kids, give free medical care, against all the odds. He showed, he showed me, he taught me him. Him, Huey P. Newton, Bobby Seale, the Black Panther Party. They showed me how to love myself. And with that love, they overflowed into the black community and into other communities. And they showed us that the power of union, the power of unity, that when they play divide and conquer, we say unite and ascend.” 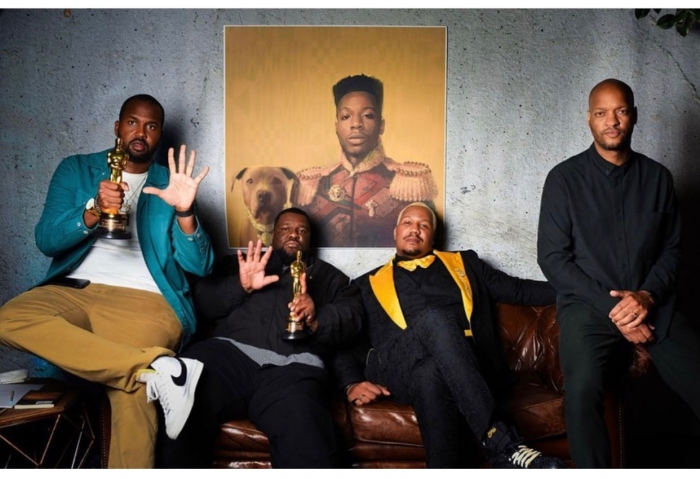 Mia Neal and Jamika Wilson became the first African-American women to win the Oscar award for best makeup and hairstyling.
The trio transformed Viola Davis into Ma Rainey, styling her crown aka hair and makeup to give her a 1920s look. Neal was the hair department head and hair and wig designer, while Wilson is Davis’ hairstylist and Lopez-Rivera is her makeup artist.
ON BEING THE FIRST AFRICAN-AMERICAN WOMEN TO WIN

“Thank you to our ancestors who put the work in, who were denied, and never gave up.  I stand here as Jamika and I break this glass ceiling with so much excitement for the future — because I can picture Black transwomen standing up here, and Asian sisters, our Latina sisters, and Indigenous women. I know one day it won’t be unusual or groundbreaking. It will just be normal.”

“Two Distant Strangers” won the Academy Award Sunday for Best Live Action Short Film and is currently playing on Netflix. The well-crafted short film is about a young African American man caught in a deadly time loop with a White cop, won the Oscar for best live-action short film on Sunday, bringing more attention to the hot-button issue of police killings of unarmed Black men, which has dominated national headlines this week.

Created by co-directors, Travon Free and Martin Desmond Roe, and produced by the L.A.-based production company SIX FEET OVER, arrived just days after Minneapolis police officer Derek Chauvin was convicted for murder and manslaughter in the killing last year of George Floyd, which sparked protests around the world.

THE OSCARS® – The 93rd Oscars will be held on Sunday, April 25, 2021, at Union Station Los Angeles and the Dolby® Theatre at Hollywood & Highland Center® in Hollywood, and international locations via satellite. “The Oscars” will be televised live on ABC at 8 p.m. EDT/5 p.m. PDT and in more than 200 territories worldwide. (ABC/AMPAS)
DON CHEADLE

ON WHY WINNING AN OSCAR FOR “TWO DISTANT STRANGERS” IS IMPORTANT

“When we started this journey to make this film, I knew it would be a film that would be difficult for people to watch, difficult for people politically engage with … for it to have done what it’s done, for us to be here holding these [Oscar statuettes] for a movie as potent and as serious as our film is, from the Academy, I think it’s unbelievable. I think it’s amazing to think that we can be standing here today holding Oscars for a film about police brutality.”

“I had an idea while we were out protesting and marching that was spurred by how I was feeling about what I was seeing, how I was feeling about internalizing the pain of seeing so many Black people be killed at the hands of police — and thinking about the emotional roller coaster you go on every time you hear a new name or see a news story, or see a new video. It put me in the mindset this feels like the worst version of living ‘Groundhog Day.’”

“And when I had that thought to myself, it was something that I couldn’t put away. It would not go away. Because, it was the pandemic and we weren’t working, we weren’t doing anything, I felt like I wanted to sit down and do something with the idea.”

Best Actor in a Leading Role

Best Actress in a Leading Role

Best Actress in a Supporting Role

“If Anything Happens, I Love You” (Netflix) (WINNER)

Best Actor in a Supporting Role

“Another Round” (Denmark) (WINNER) 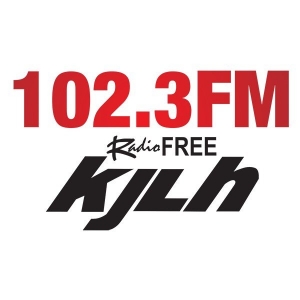 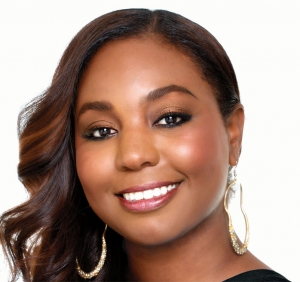 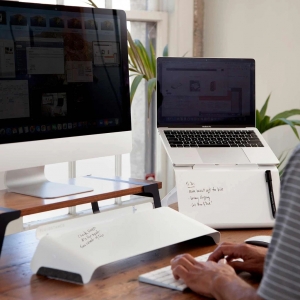 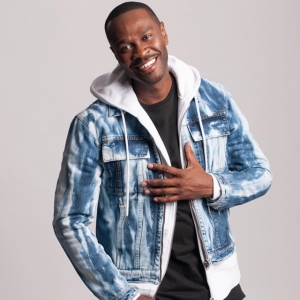 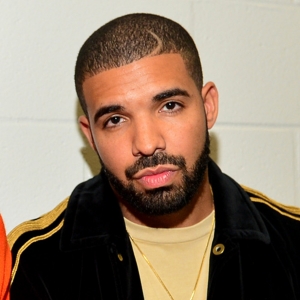 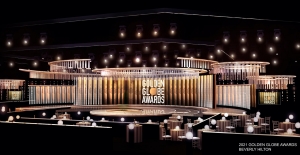