With 20 Assist and 18 Points, Darius Brown Proves He Is One Of The State’s Best Guards 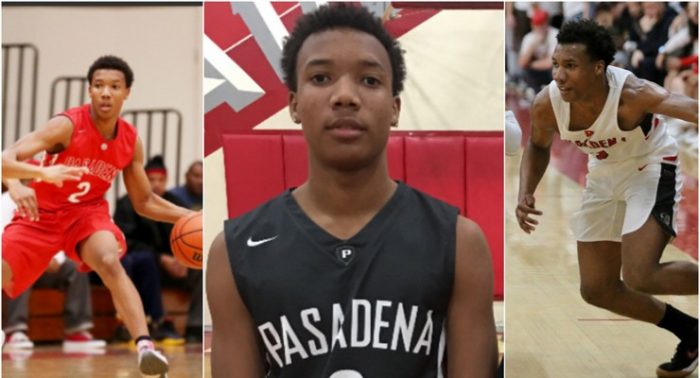 The second round of the California State 1A Division Basketball Playoffs was billed as a shootout between UNLV bound Bryce Hamilton of Pasadena and Virginia bound Kehei Clark of Taft High School.  While neither of these division one prospects disappointed the standing room only crowd, it was senior point/shooting guard Darius Brown who stole the show.  Brown led the Pasadena Bulldogs to a 75-62 victory over the Toreadors and set up the bulldogs up for a rematch against CIF Division 1AA Champion Chino Hills (Chino Hills defeated Pasadena in the CIF Finals 72-56).

Brown who is averaging 15 points and 10 assists, as well 5.5 steals per game for the season.  He was clearly the floor general who made the Bulldogs a real contender to go all the way.  He made clutch bucket after bucket as Taft tried to mount several comebacks throughout the game, but Taft’s efforts were to no avail because this night belonged to the Bulldogs of Pasadena.

“This has been a long season – just like it was last year – and it is paying dividends for us because we understand that it’s the execution of the little things that’s really serves us well at this time of the season,” Pasadena coach Tony Brooks said.

“I just wanted to lead my team to a victory.  Everyone on our team played great, Bryce (Hamilton) balled out and Tavian (Percy) hit some big shots.  Taft fought hard, but we wanted this game, we wanted another shot at Chino Hills and now we have it,” said Brown who filled up the Pasadena stat sheets.  Brown finished the game with 18 points, 6 rebounds, a phenomenal 20 assist and 4 steals with no turnovers.

Brown, who has yet to sign a scholarship offer, showed tonight why he is not only one of the best point/shooting guards in Southern California, but his performance in the California State Tournament just may prove he is one of the best guards in the entire state.

“Darius can do it all.  He can shoot, pass and plays incredible defense.  He is a real leader on the floor.  But, more importantly he is just a great kid and whichever school signs him is getting a real asset to their program,” said Jacques Bolton a former PHS basketball standout and Executive Director of the Pasadena Youth Sports Program A Step Ahead.

The game started out as a battle with both teams offenses trading baskets and Taft lead by three late in the 2nd quarter.  But the Bulldogs would not be denied.  Omari Moore of Pasadena had a 3 point play when he was fouled while driving to the basket for a slam dunk which ignited the entire crowd and also seemed to ignite the Bulldogs as well.  After a Taft missed shot, Darius Brown hit a clutch 3 pointer and was fouled to complete the four point play and the Bulldogs ended the half with a 38-32 lead.