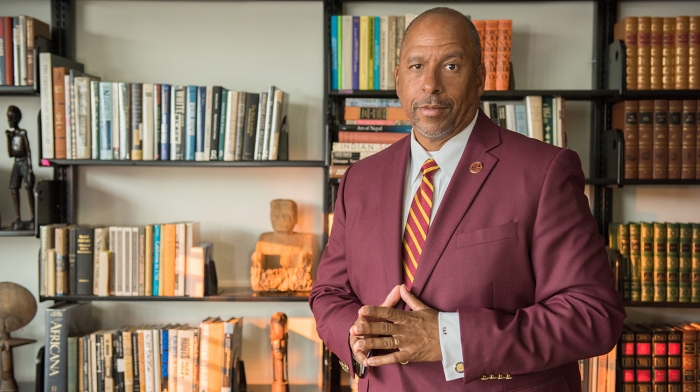 California State University, Dominguez Hills (CSUDH) President Thomas A. Parham will be honored with the City of Los Angeles Hall of Fame Award for Education on Feb. 5, at 11 a.m., at L.A. City Hall during the opening ceremony for the city’s annual African American Heritage Month Celebration.

Hosted by L.A. Mayor Eric Garcetti and the Our Authors Study Club, the awards ceremony and reception officially launches the month-long citywide commemoration of the contributions of Southern California African Americans in the areas of education, religion, the arts, culture, and the humanities.

“The sacrifices and commitment our African American ancestors made demand that we do everything we can to fulfill, rather than betray, their legacy,” said Parham, who is a product of Los Angeles, having grown up in South Los Angeles, the Estrada Courts of East L.A., Mid-City L.A., and in the Crenshaw and Fairfax districts. “I’m honored to be a servant leader helping students and people realize the full measure of their promise and possibility.”

Parham became CSUDH’s 11th president in March 2018 after serving more than 30 years in academic and administrative roles at the University of California, Irvine (UCI), including vice chancellor for student affairs, and prior to that the University of Pennsylvania.

Parham is an active member of his community, and has contributed his expertise in the areas of social advocacy, community uplift and youth empowerment in both Los Angeles and Orange counties. In the 1990s, he chartered the Orange County chapter of the 100 Black Men of America and later served as its president for three years.

Parham has received numerous awards and accolades, including the 2018 “Illustrious Leadership Award” from the American Psychological Association’s Minority Fellowship Program, the 2011 Orange County “Human Relations Award,” and two honorary doctorate degrees. In November 2019, an oral history interview with Parham was added to the Library of Congress as part of the HistoryMakers Digital Archives, the largest archival collection of its kind in the world. Earlier that month, he was elected to serve on the Coalition of Urban and Metropolitan Universities’ executive committee, and most recently, he has agreed to serve on the Los Angeles Area Chamber of Commerce’s Education Committee.