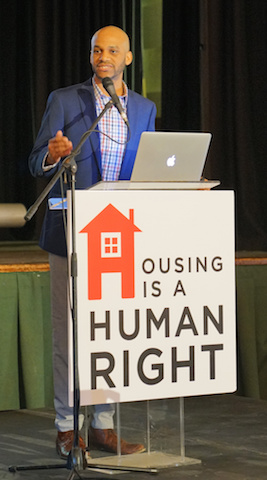 While many view it as community growth, revitalization and upgrades; others are frightened and organizing out of concern for gentrification.

The Baldwin, Crenshaw, Leimert area is under serious re-development. You notice it on Crenshaw; from Jefferson to almost Florence. You see The Metro construction you hear about the upcoming redesign of the Baldwin Hills mall, you see and hear about local Churches Community Development Corporations building senior homes and schools and you see the new Kaiser Permanente. With all the great development, many are concerned about the other entities.

The Baldwin, Crenshaw Leimert Park communities are a part of the only predominately black community in Los Angeles. While some see it as growth many residents rapidly see corporate developers, corporate landlords, and Wall Street speculators transform their neighborhoods into high-priced markets at the expense of working-class communities.

On Dec 2. over 700 attendees came together for the Resist Gentrification Action Summit. The event brought together the AIDS Healthcare Foundation’s Housing of Human Rights project and over 40 tenant rights, civil rights, faith-based and social justice organizations to discuss the community re-developments.

Event organizer Damien Goodman founder of the Crenshaw Subway Coalition, noted, “Sixty percent of the room was black, but the rest was brown and yellow coming together. If I’m a powerful person trying to gentrify the community, I’d be a little bit scared today.”

The summit sought to address the issue of gentrification through plenaries and breakout panels focusing on combating gentrification, promoting community wealth building, and demanding development without displacement. The all-day summit was held at Audubon Middle School located in Leimert Park. The summit tackled three key objectives:

1.) Unite behind the ongoing effort to repeal the Costa-Hawkins Rental Act, allowing localities to strengthen protections against rent increases.

2.) Share protective strategies to keep residents in their homes and neighborhoods, such as building tenant power, stopping criminalization as a tool of gentrification, countering real estate speculation, and more.

Hundreds show up to learn more about the latest construction and housing developments in the Baldwin, Crenshaw, Leimert communities. (Photo Courtesy: Kristina Dixon) 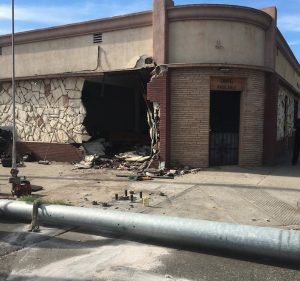