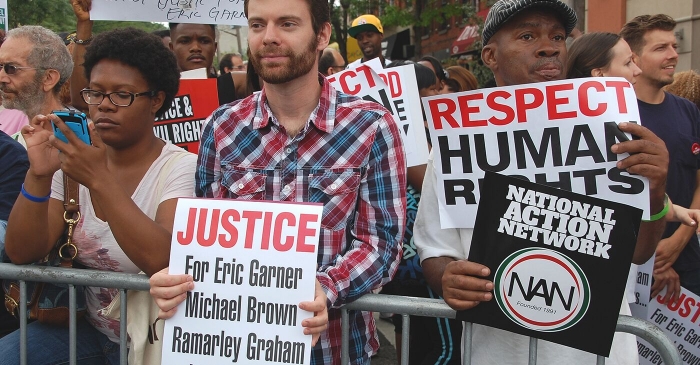 Protesters at the “We Will Not Go Back” march and rally called by Al Sharpton and the National Action Network to demand justice for the family of Eric Garner whose death was declared a homicide by the NYC Medical Examiner. Garner died on July 17, 2014 while being arrested by police. (Photo: Wikimedia Commons / Credit: “Thomas Altfather Good”.)

Pantaleo, who stopped Garner because he was selling cigarettes, placed Garner in a chokehold for 15 seconds as Garner said “I can’t breathe” eleven times as he was lying face down on the sidewalk. Garner’s death was ruled a homicide by the New York Medical Examiner. Video footage of Garner being choked to death by Pantaleo demonstrated that Pantaleo was using a department prohibited chokehold.

On December 3, 2014, a grand jury decided not to indict Pantaleo and as a result there were protests and renewed national outrage. The death of Eric Garner was talked of as one of the most outrageous examples of police brutality over the last ten years. Additionally, it was also yet another case that was captured on video just like the cases of Walter Scott, Lacquan McDonald, Philando Castile and Alton Sterling.

Ramsey Orta, who filmed Garner’s death was later imprisoned and said he was harassed by police in the years following his friend Eric Garner’s death. “Many living in the Tompkinsville neighborhood of Staten Island felt they lived under constant surveillance by the 120th Precinct. Orta and Garner had often talked about how just leaving their homes meant expecting to be followed, stopped, searched,” reported The Verge in a profile of Orta in March 2019.

As a result of NYPD Deputy Commissioner of Trials Judge Rosemarie Maldonado’s decision to recommend Pantaleo be fired, Pantaleo has been suspended, “as is the longstanding practice in these matters when the recommendation is termination.” There is a mystery as to whether Pantaleo will be paid during the suspension.

Two days after activists protested yelling “fire Pantaleo” at a Democratic debate in Detroit with New York City Mayor Bill de Blasio standing on stage, a New York administrative judge ruled that Pantaleo should be fired.  Pressure from activists and media attention put Eric Garner’s death at the forefront of discussions on police brutality and misconduct.

The City of New York awarded an out-of-court settlement in July 2015 to the Garner family of $5.9 million. In 2019, the U.S. Department of Justice declined to bring criminal charges against Daniel Pantaleo under federal civil rights laws. 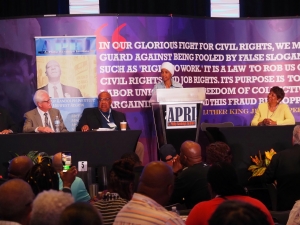