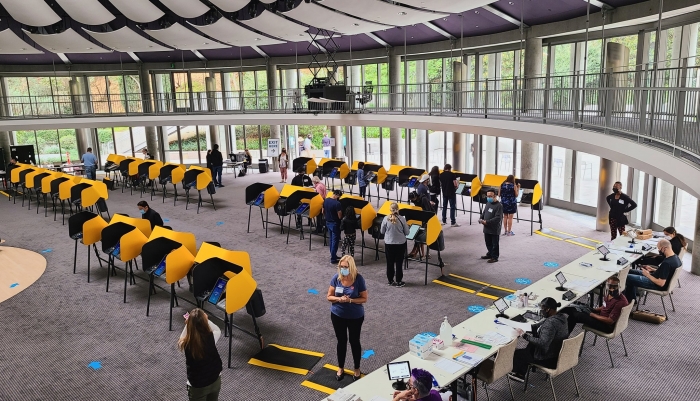 According to KCRW, more than 5 million Californians cast their ballot for the 2020 U.S. presidential election, and the numbers are expected to increase as the general election approaches.

Although there has been a massive voter turnout, residents have witnessed isolated incidents like the ballot box fire in Baldwin Park and threatening emails that read, “Vote for Trump or else.” Voters are also aware of Russia’s efforts to tamper with the upcoming election.

After receiving calls, emails, and letters from confused and frustrated residents, Congresswoman Karen Bass decided it was time to host a virtual town hall. On Wednesday, October 21, Bass was joined by Los Angeles County Supervisor Mark Ridley-Thomas and Los Angeles County Registrar-Recorder/County Clerk Dean Logan to discuss election security, voter suppression, and the steps Angelenos can take to ensure their ballots are counted.

“This election is a matter of life or death,” she said.

Supervisor Ridley-Thomas spoke next on the County’s safe and secure voting processes. He also highlighted the safety measures that are in place to protect individuals who choose to vote in-person. One step the County has taken is using larger spaces such as schools, places of worship, theatres, businesses, sports arenas, and stadiums, as polling centers to accommodate ample physical distancing.

There are currently 5.7 million registered voters in Los Angeles County, more voters than 42 of the 50 states. Unfortunately, having a larger county comes with its challenges in successfully pulling off this new voting experience.

Logan spoke next to explain further the thought process behind the County’s new modernized voting model and plans for safe and accessible voting. 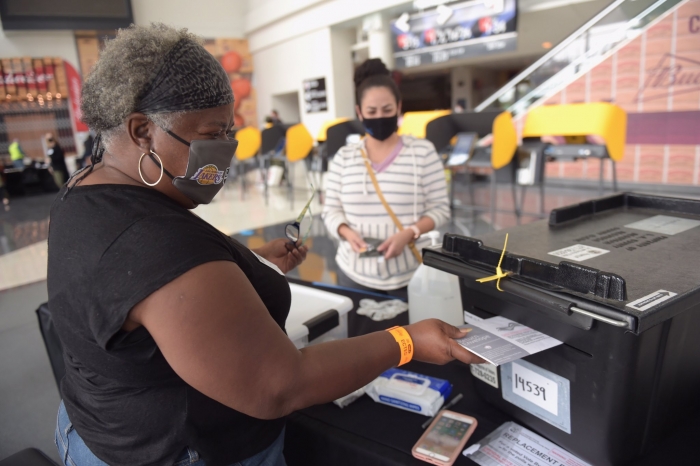 “Cast your ballot or drop off your vote by mail ballot at an 11-day Vote Center near you.” (photo courtesy of the Los Angeles County Registrar-Recorder/County Clerk)

“Every voter, by now, has been mailed a vote by mail ballot,” said Logan.

“That serves as the safeguard or the fail-safe method to ensure that every one of our registered voters has an opportunity to participate in this election. Fortunately, in Los Angeles County, we have been providing vote by mail as an option to our voters for decades, and we have developed partnerships with our local postal officials who recognize the importance of moving election mail appropriately.”

Logan says that the safety precautions and proactive measures the County has taken to carry out the vote by mail method have put California in a better position than most states. Besides working with postal officials, the County has also expanded the options for returning vote by mail ballots.

“We have over 400 ballot drop boxes here in Los Angeles County,” he said.

“While we’ve had many ballot drop boxes in the past, those have been internal and inside libraries and City Hall, but with the public health challenge, we wanted to make sure there was a contact-free option of depositing ballots, and these secure drop boxes serve that purpose.”

Following the Baldwin Park ballot box fire, the Registrar-Recorder/County Clerk’s office began scheduling ballots to be picked up every 24 hours. Once the ballots are picked up, they are brought back to their office for processing.

According to Logan, the Baldwin Park incident is under preliminary investigation, and the LA County Registrar Recorder/County Clerk’s office is cooperating. However, officials believe this was an isolated act of violence.

During the meeting, Logan assured viewers that their office identified the voters and retrieved 230 ballots. Since then, new ballots were reissued to these voters, and a hotline and email address was established to provide additional assistance.

For those who prefer voting in-person, the County has approved a 10-day early voting period leading up to election day. Beginning Saturday, October 24, voters in the county can go to any location between 10 a.m. – 7 p.m. to cast their ballot. On Friday, October 30, the County will increase the number of voting locations. 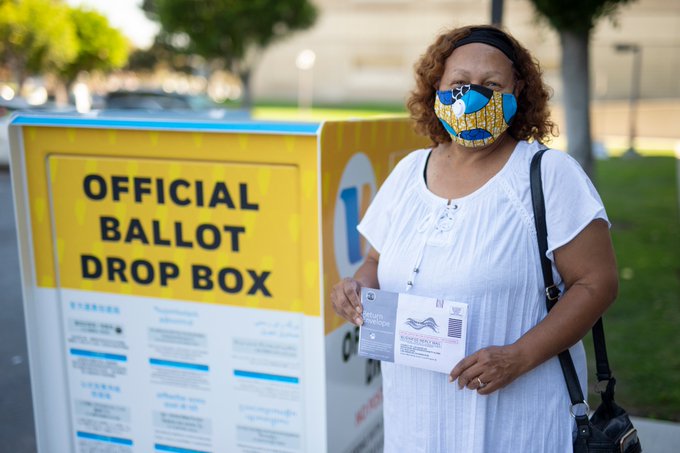 Another new voting feature is the ballot tracker subscription service, “Where’s my ballot,” which allows voters to sign-up to receive text messages or emails to let them know when their ballot has been received and counted. To subscribe, visit www.california.ballottrax.net.

During the question and answer portion, Bass, Ridley-Thomas, and Logan discussed homeless voters, a national voting holiday, and a second stimulus check.

California’s Conditional Voter Registration Law allows individuals experiencing homelessness to register to vote and cast their ballot at any state’s voting centers. However, they must provide a physical location such as a shelter or a home.

In terms of establishing an official national voting holiday, Logan stated that “any single day of voting is insufficient.” The new 10-day voting method and variety of options make voting accessible for all.

Congresswoman Bass closed the meeting with an update on second stimulus checks.

“It is possible,” said Bass.

“[House Speaker Nancy Pelosi] is negotiating up until the end. There is a possibility that I get a call back next week so keep your fingers crossed.”

As a reminder, ballots can be placed in an official ballot drop box, in-person at a voting center with zero-wait time, or returned by mail (no postage is required). Don’t forget to seal, sign, and date the official return envelope.

To find a ballot drop box near you or a voting center, please visit www.lavote.net.