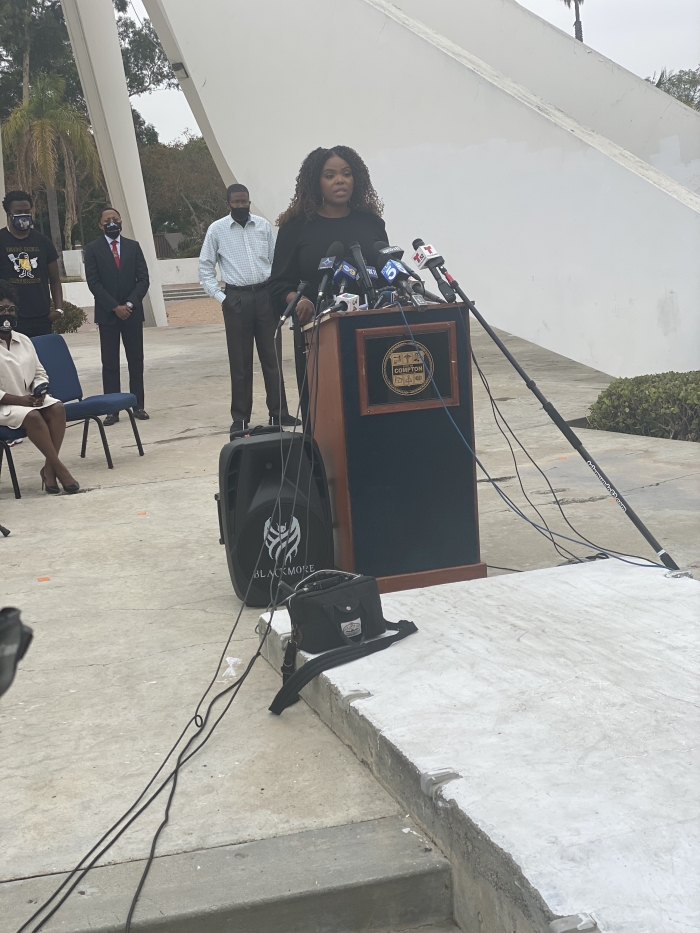 Standing in front of the Martin Luther King Jr. monument, Mayor Brown’s announcement followed allegations of a violent gang of sheriff’s deputies who call themselves “The Executioners” and control the Compton station through force, threats, work slowdowns and acts of revenge against those who speak out.

“I am calling for attorney general Xavier Becerra to stand up for the Black and Brown people of Compton,” Brown told reporters at a news conference.  “It is unacceptable for us to be terrorized in this community! We have been terrorized for decades. The magnitude is unmeasurable.  This is a public health crisis.  We are suffering from PTSD in magnitudes that are truly unmeasurable. We will not continue to accept this treatment from the sheriff’s and whatever we have to do to get justice we are going to do.”

The mayor was joined by Compton City Attorney Damon Brown who told reporters, “Celebrating deputy shootings. Setting illegal arrest quotas. Threatening slowdowns and ignoring or responding slowly to calls.  Why some of these allegations were disturbing to me is because these are the same complaints that residents have been making.  That deputies within leadership in the sheriff’s department have openly denied as being false reports of information and now we have a deputy himself within the station making these same claims with allegations of what’s happening in the department.” 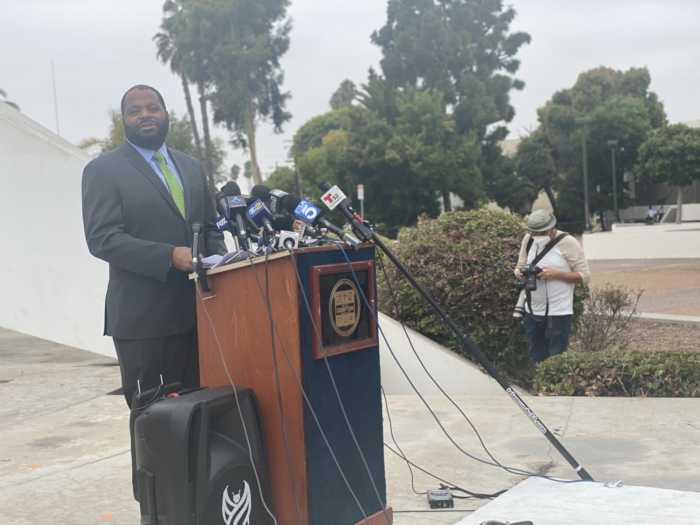 Compton native, Jermelle Henderson, better known as local restaurateur Taco Mell, said he was recently pulled over at gunpoint by a deputy.

“She said, ‘Oh, this what we do in Compton,’” Henderson said. “And she pulled me out and she put me in handcuffs and then that’s when I told her she was treating me like a criminal, I didn’t do anything.”

Henderson said that once the deputy realized who he was, she told him that she would be by his restaurant to pick up a care package.

Mayor pro tem Michelle Chambers added, “This is unacceptable. Our guests, our residents, anyone visiting our city have a right to visit or live in our city without being preyed upon and that is exactly what is happening.  It is sad that we’re still having this conversation and dialogue even within 90 days of George Floyd being murdered.” 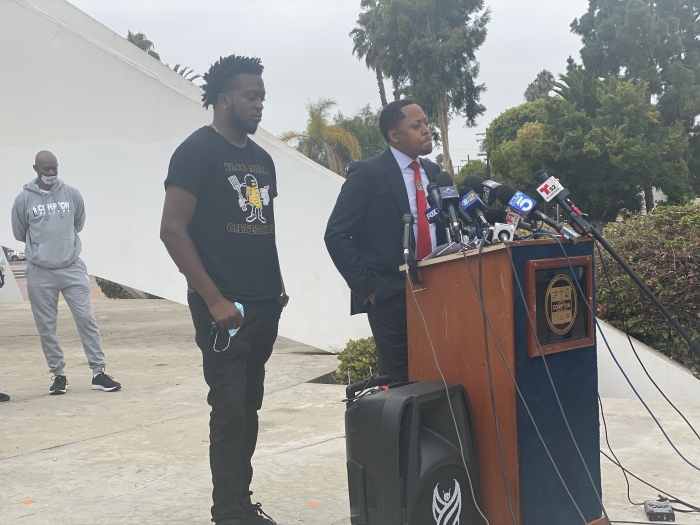 Attorney Walter Mosley stands next to his client Jermelle Henderson better known as Taco Mell at a news conference in Compton, Calif. on Tue., Aug. 4.

Chambers went on to praise Henderson for his commitment and service to the city the Compton.

“I want to personally apologize to the Henderson family for the treatment that Mr. Henderson received by the deputies in our city.  Mr. Henderson was a resident of our city.  A great community partner. He’s been giving back to this community since this pandemic and well before with toy giveaways, Christmas giveaways, and back-to-school giveaways at no cost.  He’s been a great service leader in our community.”

In a moving testimony that brought tears to the mayor’s eyes, Coach Cooper detailed for reporters how the day before Thanksgiving in 2019, he was arrested and sent to the county jail for fitting the description of a suspect.

Cooper says that he was taken downtown and put in jail before being released on Thanksgiving morning in the rain with no money, cellphone or way to get back home and that a kind bus driver gave him a courtesy ride.

“We demand the same treatment that deputies provide to the residents of Malibu, Rancho Palos Verdes, and other affluent communities. And, according to the size of our contract with the Sheriff’s Department, we have $22 million reasons to expect it,” said Mayor Brown. 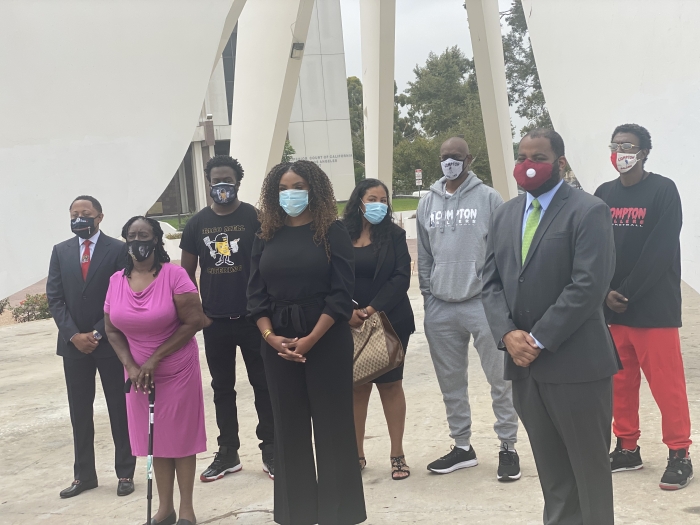 Mayor Aja Brown and City Attorney Damon Brown stand with members of the Compton community after a news conference on Tue., Aug. 4.

“The City currently contracts with Sheriff’s Department for law enforcement services at a price tag in excess of $22 million but incidents like what occurred with Dalvin Price are unacceptable and we will not tolerate it,” said Compton City Attorney Damon Brown. “The taxpayers of this city will not fund our own destruction and dehumanization. We expect our tax dollars to be used for our protection and for law enforcement to work cooperatively with City leadership to improve safety and quality of life. For this relationship between the Sheriff’s and the city to continue, there must be accountability.”

Sheriff Alex Villanueva said last week during a Facebook Live event that “there is no gang of any deputies running any station.” But, he later issued a statement saying he takes the allegations seriously “and recently published a policy specifically addressing illicit groups, deputy cliques, and subgroups.”

In 2000, led by then-Mayor Omar Bradley, the five-member city council voted 4-to-1 to disband the Compton Police Department in hopes of getting a handle on the high homicide rate that had gripped the city and kept residents indoors in fear of their lives.  At the time the $12.3-million contract with the city of Compton was the most expensive among the 41 cities patrolled by the Los Angeles Sheriff’s Department.