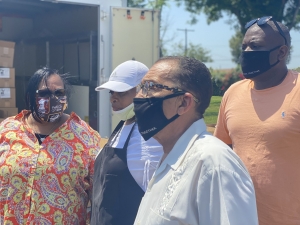 On Saturday, May 9, Compton United joined Mayor Aja Brown, Councilmembers Michelle Chambers and Tana McCoy in distributing much-needed supplies to residents during the coronavirus pandemic. With events staggered throughout the day in different parts of the city that is home to 100,000 people, residents were able to get diapers, food, hand sanitizer, water, and more for free. Los Angeles Councilmember and candidate for Supervisor Herb Wesson brought hundreds of Mother’s Day gift bags to each of the three events that took place at Gonzales Park, Compton Career Link, and Burrell-MacDonald Park.  Dr. Alan-Michael Graves, Director of National Programs of the Good Plus Foundation, donated thousands of diapers to the event.  ... read more »
Mayor Aja Brown Endorses Mike Bloomberg for President, Hosts Presidential Rally in City of Compton The City of Compton held its elections for District 1 and 4 for council district seats on Tuesday, June 4. As of press-time, Michelle Chambers took home the victory winning the election, defeating incumbent Janna Zurita by a large margin of 65 percent of the votes for the District 1 seat. ... read more »
ADVERTISEMENT
Compton City Officials: Acquired $8 Million Dollars for Street Improvements "Our family has been shaken to the core of the loss of our Mike. Thank you to everyone who contacted us, flooded us with love, and more importantly, prayers. I will miss my brother, my best friend and birthday partner in this realm, but I know he will continue to watch over me and our family in heaven as he did on earth," Michelle Chambers, Williams' sister, said in a statement. ... read more »
Compton Mourns the Loss of 14-Year-Old Semaj Miller

Hundreds gathered at Compton City Hall on Thursday to celebrate the life of young basketball prospect, Semaj Miller. The 14-year-old was gunned down in South Los Angeles on July 29. ... read more »
Compton Mayor Aja Brown and City Council Call on the State for Investigation on Compton Sheriff’s Deputies At the time, the $12.3-million contract with the city of Compton was the most expensive among the 41 cities patrolled by the Los Angeles Sheriff's Department. Led by then-Mayor Omar Bradley, the five-member City council voted 4-to-1 in July 2000 to disband the Compton Police Department in hopes of getting a handle on the high homicide rate that had gripped the city and kept residents indoors in fear of their lives. ... read more »
The Positive Results Corporation Hosts 3nd Annual Purple Purse Tea Party And Fundraiser In Support Of Domestic Violence Awareness Domestic Violence Is A Community Concern! With YOUR Help We Can Prevent & End The Cycle of Violence! ... read more »
Congresswoman Waters and Assemblyman Gipson to Chair 49th Annual Watts Summer Festival Commemorating the 1965 Civil Unrest The 54-year-old star of  "The Wire'' -- who was an Emmy nominee this year for his work on "Lovecraft Country'' -- died of acute intoxication from a lethal mix of fentanyl, p-fluorofentanyl, heroin and cocaine, the New York City Office of Chief Medical Examiner confirmed in a statement to media outlets Friday. ... read more »
Diane Edith Watson: The Iconic Living Legend of Los Angeles Politics Diane Edith Watson has lived a full life and shows no signs of slowing down.  On the morning of our interview, the 87-years-young legendary political icon had already been on the phone with House Speaker Nancy Pelosi, was coordinating her pink and green wardrobe for the inauguration of her Alpha Kappa Alpha sorority sister, Kamala Harris, and had already spoken with a cadre of Washington D.C. leaders, all in the hopes that the retired congresswoman was feeling up to making the journey to the January Presidential Inauguration of President Joe Biden and Vice President Kamala Harris.  ... read more »
Supervisor Holly Mitchell Takes Historical Seat on the Los Angeles County Board of Supervisors For years, the members of the Los Angeles County Board of Supervisors were known as “The Five Kings,” a title used to describe the powerful all-male Board of Supervisors, which remained that way until 1982 when Yvonne Brathwaite-Burke shattered the glass ceiling and became the first woman and the first African American to be elected to the Board of Supervisors. ... read more »
Black Women’s Political Organization Holds Holiday Gala