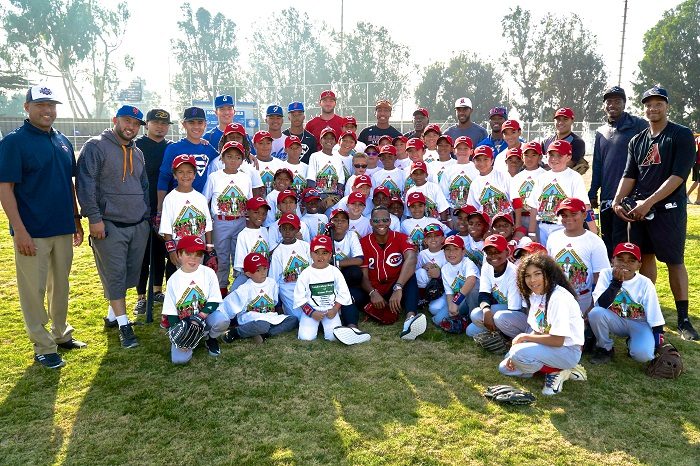 The sun was shining brightly upon the faces of 100 smiling kids all dressed in baseball uniforms Sunday morning (Jan. 7) for MLB dual-pitcher Hunter Greene’s first annual baseball leadership camp at Darby Park in Inglewood. Campers ages 9-14 gathered around eighteen-year-old Greene as he and New York Mets pitcher Noah Syndergaard warmed up for the day’s activities on the newly renovated baseball field.

“To have someone of his stature come here to our community, interact with our kids and capture their imaginations through the game baseball is one of the single best accomplishments this city has seen,” said Inglewood Mayor James T. Butts who attended Greene’s inaugural camp.

Less than a year ago, Greene was still pitching on the mound at his alma mater Notre Dame High School in Sherman Oaks, CA. After being drafted second overall in the 2017 MLB draft last June, Greene made history by inking the highest signing bonus contract in MLB history for $7.23 million with the Cincinnati Reds.

“When I got drafted, it was crazy; I felt like I was in a dream,” Greene said. “All the years of working out, all the years of school work and everything was just given to me at that time. Now, just being out here and being with these kids is what it’s all about.” 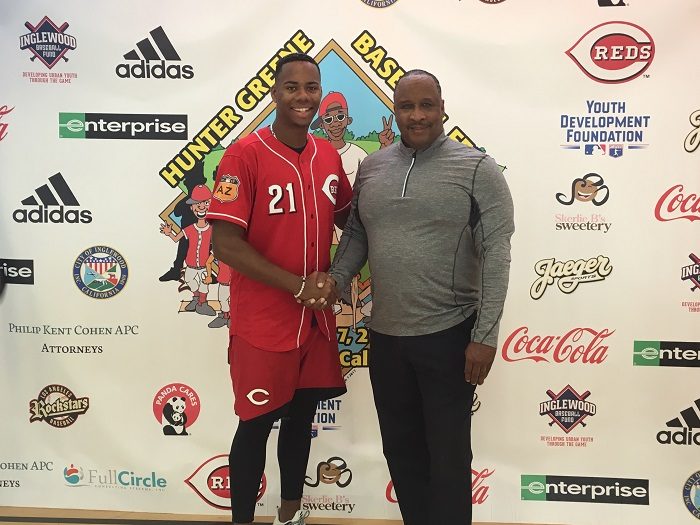 Greene is less than seven months into his professional career, has not even gone through his first spring training and has already made it a priority to give back in the park that he used to play in tournaments. Syndergaard, who is entering his third season as a Major Leaguer, commended Greene for his charitable endeavors.

“I can’t remember what I was doing at 18-years-old,” Syndergaard remarked. “Growing up when I was a kid playing baseball, I never got the opportunity to watch two professional baseball players play catch and watch them work.”

Greene was also joined by Cincinnati Reds Hall of Famer, Eric Davis, who won the 1990 World Seriess, former Major Leaguer Royce Clayton, Angels prospect Dalton Blumenfeld and Diamondbacks prospect Tyler Mark, who were all in attendance to show their support.

It came as no surprise to Greene’s former youth baseball coach Erikk Aldridge, founder of the Inglewood Baseball Fund, that Greene reached out and expressed interest in putting the event together. The event featured baseball instruction, a reptile petting zoo, a gaming truck and face paint.

According to Aldridge, “Hunter’s commitment to the community,” is what stands out the most about the pitching phenom, not that he pitches in the triple digits. “He was our championship game pitcher,” back in the day Aldridge said laughingly. 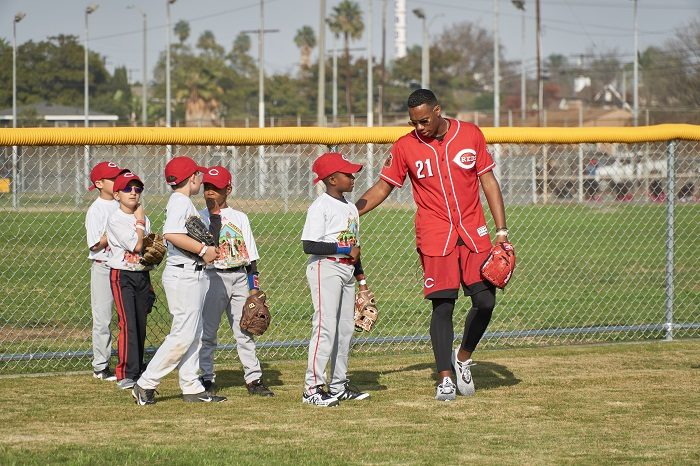 Greene’s talent was partially natural talent and ability; there were core values his parents instilled in him to cultivate his raw talent. During the leadership seminar portion of the camp, Greene’s mom, Senta Greene, who is an educational consultant, addressed campers and their families in the Darby Park auditorium. She detailed how her son’s integrity, humility, compassion, courage and discipline have led to his success. Senta also made sure she shared the not so glamorous parts of Greene’s journey like when his sister was diagnosed with cancer.

“There were times when Hunter used to get dressed in the hospital room for his games,” said Senta. She quoted Greene’s dad, Russell, stating the importance of “keeping the main thing, the main thing.” Greene’s dad is a renowned private investigator who worked with Johnnie Cochran’s for two decades, dating back to the O.J. Simpson murder trial. Both of his parents were on hand for the half-day worth of events and looked every bit proud.

Following the day’s ceremonies, Greene took four campers on a personal shopping spree at the Adidas store located at Westfield Mall in Culver City. All proceeds from the event will benefit the Inglewood Baseball Fund.

“Baseball is America’s pastime and it keeps the children in sports. in college, in school, keeps them active and out of trouble,” said Arrick Turner, Darby Park Senior Recreation Supervisor.