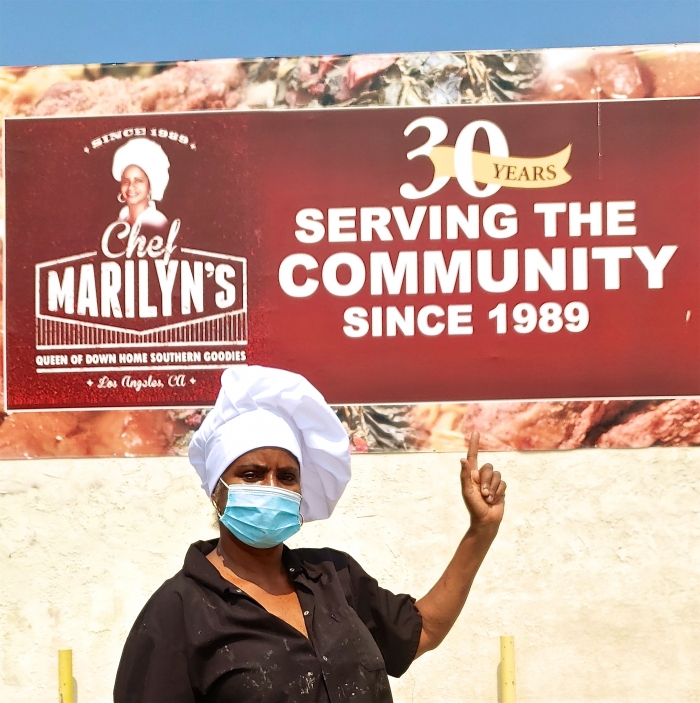 Cooking comes from the soul; Chef Marilyn has proven that through her adventures of catering to the crème de la crem of celebrities, such as Stevie Wonder, Nancy Wilson, and Isaac Hayes. Through her soul food, one can taste the love and passion of her mother, Olivia Johnson, who passed right before opening her own restaurant.

Chef Marilyn’s soul cuisine stands out because of the love and devotion that is put into every bite. She describes her journey with such passion, as she explained cooking was her escape out of the tunnel of Corporate America while also standing as a beacon of purpose for her mother’s dream to live on.

“It’s a blessing,” Chef Marilyn stated, “I had no idea 31 years ago, when I decided to just start cooking because I was working for Corporate America. I would cook at our house and people would come over; everybody loved my food.” From there, her name grew through the grapevine and Marilyn started delivering plates around her area and selling dinners from her house.

That is how Chef Marilyn described her origin story, on how she ended up on the path of cooking. As if it were a divine appointment; her mom at the time was acquiring property to open a restaurant of her own. But there was a change in energy when Ms. Olivia Johnson found out she had terminal cancer.

However, the seed for growth was planted in her daughter, Chef Marilyn, to keep that dream alive and thriving.

Located at 2638 Crenshaw Boulevard, in South Los Angeles, CA, one can smell Chef’s Marilyn’s award- winning gumbo wafting through the air and calling the masses to try the “Queen of Down-Home

The power of Ms. Olivia’s dream lives on through all the rich and fresh ingredients used to make Chef’s signature dishes. But the legacy of community also lives on the same menu. Reflecting on the hardships COVID-19 as brought to Los Angeles, Chef Marilyn made a promise that anyone can afford to have a decent meal at Chef Marilyn’s soul food cuisine, there are al carte items that are mostly as low as 99- cents. This is to have a safety net for anyone feeling the financial stress of trying to feed themselves or their family, they always have a way to come get a well-balanced meal for as low as five dollars.

With Chef Marilyn’s mother being her Angel, the recipes felt heaven sent. She explained that she would have dreams of recipes, and when she made the dishes for people to try, they loved it, “Because I wasn’t a kid who was brought up in the kitchen,” Chef Marilyn explains, the love and passion she has for her mother, guides her hands to make supernatural flavor combinations.

Her dishes are known to take one through a plethora of euphoric emotions. It’s not enough to say Chef Marilyn’s cooking is good, it’s out of this world. “My food is different from a lot of people that make the exact same dishes in their restaurant, because mine is full of love.”

The gumbo is one of Chef’s Marilyn’s favorite dish to make, because that plate is part of her mother’s creole background and its one of the few entrees that Chef Marilyn learned from her mother. The gumbo is a seasonal specialty to catch at Chef Marilyn’s place, but that creole cooking is found at the base of all the soul food dishes offered on the menu.

Chef Marilyn’s’ mother taught her the secret to making unparalleled flavors in her gumbo. The passion needed to cook at this caliber was instilled into Chef Marilyn’s heart and spills over to her flavor. She shared her belief of her mother living inside of her, and she is fulfilling the vision Olivia Johnson was looking to have.

There were adjustments made to ride the wave of COVID-19, but Chef Marilyn is fighting with all her

might. One can indulge in Chef Marilyn’s delectable cooking from 11 am to 4 pm, seven days a week. There are delivery app options, such as Grub hub, Uber Eats, and Postmates. Strictly for take-out, one can peruse the website for a list of her divine dishes and also keep up-to-date with all the desired social media platforms as well.

Chef Marilyn closed with the following statement, “ We are going to get through this together and as long as I am healthy and available, I will continue to come to work and make sure that I have excellent quality food and I can feed people even to the point where we will always have 99-cent items. I made that promise and I been sticking to that.”