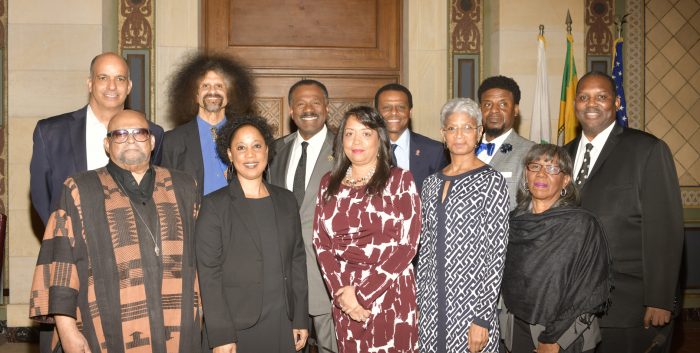 Gun violence, economic disparities and media representation were among the topics debated at the panel discussion sponsored by city of Los Angeles and Our Authors Study Club.

Kicking-off the dialogue with current events, Brown cited the news reporting on the Feb. 14 mass shooting at a Florida high school.  Noting that the White shooter, who used an assault weapon to kill 17 people, had been described as “troubled,” Brown asked panelists for their thoughts on how people of color are portrayed by the media.

“The data will show that there is disparities in how mass shootings are covered [and] the victims of mass shootings.  As of this day, we’ve had 18 or 19 mass shootings.  Each of those shootings has had racial issues and we have not heard that. We probably haven’t heard it because we have a (lack) of African Americans who can speak to it on the news without retribution,” said Ricks.

Welch, who is an Air Force veteran, noted, “The majority of our mass murderers are not people with skin like myself and the media wants to depict these people as ‘troubled,’ but with African Americans, ‘they are violent, they have violent tendencies’ and they use stronger words.

“In the military, I was only allowed to carry a M16.  If the military can’t carry them (assault rifles), why should the public?”

Offering another aspect, Karenga insisted the media’s differences in portraying people of color actually stems from the nation’s long history of oppressing minorities, such as “the genocide against Native Americans, the holocaust of slavery imposed on Africans and the brutal disposition of Mexicans and also the brutalization of Asian labor.”

Explaining further, he said, “Their ancestors did this and even the media reaffirms it.  They’re killing people all of the time.  We’re in a war zone. We’re struggling all of the time. We have to put it in a Black context.  We can always talk about humanity, but we can’t do it at the expense of our own humanity.” 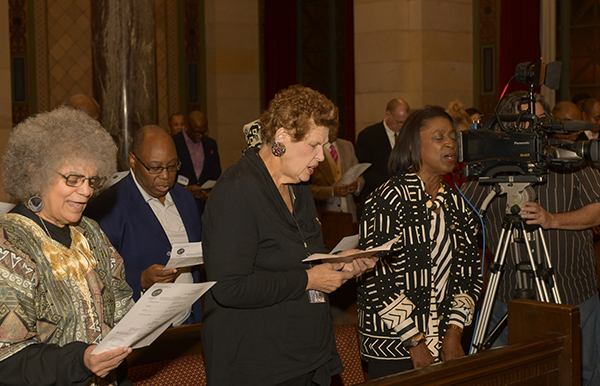 Jefferson, who previously served as executive director of the California African American Museum, believed the media’s reports on gun violence have an underlying message implying that people of color should not have guns.

“The real reason you end up with an enormous fight about these guns is the idea that ‘I need these guns to protect me against those people.’ We understand who actually ‘those people’ are,” said Jefferson.

Expanding the discussion to the gun violence war, Armour said that the focus should be on reducing the number of African American victims, which do not occur from mass shootings, but more frequently from Black-on-Black incidents as a result of socio-economic conditions.

“A lot of times, it is members of the Black community, truly disadvantaged Blacks, turning guns on one another and squeezing the triggers. If you want to reduce that rate of violence, focus on the social inequalities,” remarked Armour.

“They are crimes of poverty, covenant schools, and industrialized inner city neighborhoods.  Let’s not forget the restrictive covenants, re-gentrification, the constant struggle many persons are encountering,” he said.

As Brown neared the end of the forum, he asked panelists for suggestions in applying lessons from the past to guide African Americans in the future. Funderburk said citizen can take advantage of city government resources to improve their quality of life. For example, LADWP recently launched an Equity Metrics Data Initiative to ensure that their services and programs positively impact low-income ratepayers.

“We wrote the rules that communities can use to empower themselves through DWP’s ratepayer largesse.  The equity metrics has focused renewed attention on funding additional customer engagement, policy development and outreach to increase participation in rebates,” said Funderburk.

“In a city where 40% of the households qualify as low income, targeting these groups for attention has always been a priority.”

Responding from an educational standpoint, Dr. Davis urged the Black community to oppose Trump administration efforts to dismantle President Obama’s policies that consider the racial and socio-economic composition of those students being suspended or expelled.

“We have got to be a lot more aggressive in asserting some of the gains that we had. We need protective policies that will keep our kids safe and in school and most productive so that these things will happen not with White boys shooting things up, but our kids aren’t suffering on the other end of the spectrum as well,” he said.

Karenga added, “There is no substitute for an aware and engaged people constantly involved in a multiplicity of activities that define and advance their future. Love each other and our people. Seek and speak truth. Demand justice.  Be constantly concerned with the well being of the world.”