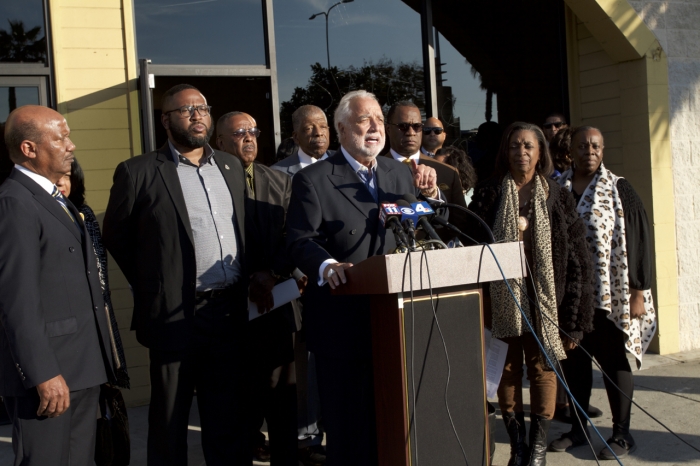 A “here we go again” sentiment permeated the air, as Black leaders met, yet again, with LAPD Chief Michael Moore to demand reform and accountability this time around, as the investigation centers on officers accused of falsifying gang database information.

Initially, three officers in LAPD’s Van Nuys Station added a minor’s name to the CalGang shared criminal intelligence system, which tracks so-called active gang members, according to LAPD. The boy’s mother received notification that he was added into the system, and challenged the claim. Further investigation by a supervisor found no rationale for the child to be added, and he was taken off, following a review of further evidence that included body-worn video footage and field interview cards, which officers use to make their designations, explained Moore.

In the process, the number of officers grew from three to 20, and in addition to internal affairs, the LAPD Inspector General is also investigating how deep and far-reaching the problem goes. Community leaders and activists argued dilemma goes beyond Moore’s regime. Police have historically targeted and criminalized Black and Latino youth in L.A., but no more, the leaders declared. 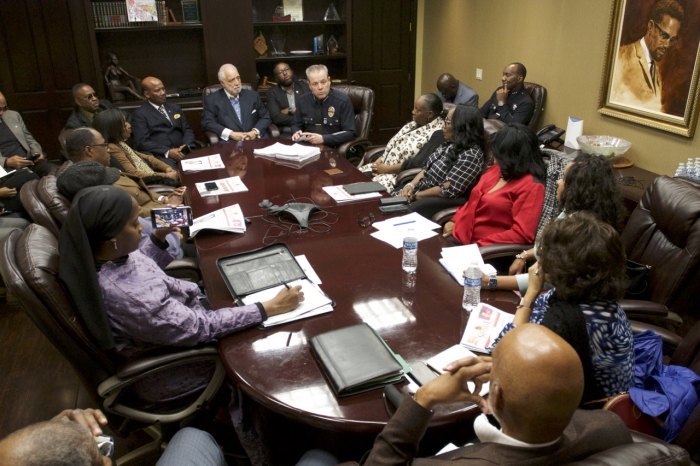 “Unfortunately, Chief, we have these meetings too often,” stated Danny J. Bakewell, Sr., executive publisher of the L.A. Sentinel and L.A. Watts Times newspapers. “We believe you have the right intent and the right spirit, but there’s not a lot of things changed,” he told Moore.

The Black leaders squarely blamed LAPD policies and the cops they deemed rogue and racist as the problem. They called for accountability, including termination of the officers responsible and eradication of the CalGang database altogether. They also checked themselves, saying, this should never have happened on their or Black politicians’ watch. The leaders vowed to meet more, monitor the Metro investigation and LAPD’s actions and community policing immediately. 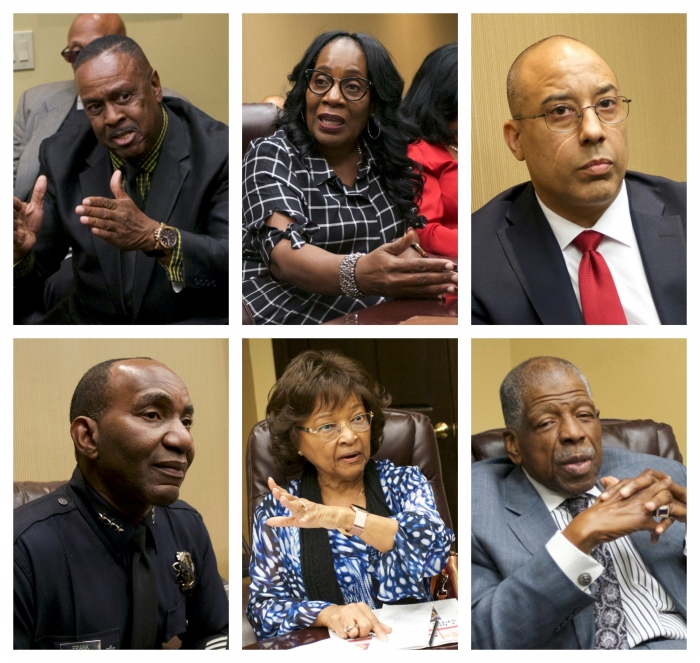 In spite of Moore being one of, if not the most progressive, available police chiefs in Los Angeles, community policing problems persist, Bakewell continued, as he began the filled-to-capacity meeting in the Sentinel’s conference room. “The question is, is the system broken?” Bakewell questioned.

“I don’t think the system is broken, but I think the system needs continued work,” said Moore, who attended the meeting with Assistant Chief Horace Frank of the LAPD’s Counter-Terrorism and Special Operations Bureau and LAPD media staff. He said the LAPD is in a constant state of evolving the organization. He disagrees with eradicating the gang database, which exists under the auspices of the State Attorney General’s Office, but shared his August 13, 2019 letter to State Attorney General.

It includes his proposed modifications to the CalGang protocols, including, changing the way officers document individuals as “gang associates,” and eliminating law enforcement officers and informants as reliable sources for designating individuals as active gang members or associates/affiliates.

If approved, officers will now only enter individuals into the CalGang database people who personally admit to being gang associates and meet two of the eight requirements: 1) The person admits to being a gang member; 2) has been previously arrested for gang activity; 3) and has been identified as a gang member by a reliable informant or source. For instance, one police officer telling another officer a person is a gang member; 4) individuals are listed if they associate with documented gang members; 5) has been seen displaying gang symbols and/or hand signs; 6) has been seen frequenting gang areas, such as neighborhood parks; 7) has been seen wearing gang attire; and 8) has gang tattoos.

“I think, it’s nothing on you; it’s on us! We have to say we want that eradicated,” said Muhammad. “Nobody should stop somebody and ask them, ‘Are you in a gang?’ For what!? Why are you asking that question? Did I do anything wrong?” he said. Muhammad feels the police and system are stereotyping and taking advantage of Black youth, single mothers and the poor and apathetic, particularly in areas where gang culture permeates music, fashion and entertainment.

“I appreciate you coming, but you work for us. We now have got to make demands on you; either it’s our Black politicians. Is this a policy? If so, where did this policy come from?” questioned Muhammad.

“We’re being engineered into criminality, and it’s being done systematically, while we sit on the wayside,” said Boyd. He highlighted a recent Justice Department report revealing shocking disparities in statewide police stops of Black motorists as another example of the problem. In the aftermath of Moore’s transparency about the Metro investigation, what is the solution, Boyd asked. “That’s life and death for us. Our sons are being crippled and injured for life. Their careers will never be able to get off the ground, because somebody took advantage of them disproportionately,” he said.

Bremond-Weaver said the issues, including racial profiling, and disparate stops surrounding Metro Division must be addressed openly, not just by LAPD top brass. Officers must be in the community, explaining what happened around CalGang and the process of entry and exit from the database, she said.

Moore positioned that the LAPD hires people whose ethnicity reflects the communities they serve. “The question for leadership is what are our values? What’s our mission? And how do we go about organizing and developing and holding [ourselves] accountable to ensure that we receive the type of expectations and results that we seek,” Moore said, as he gestured to himself, right hand over his chest. 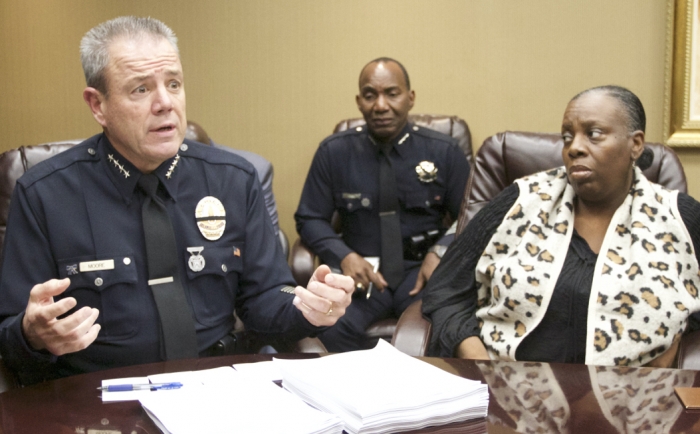 While many have suggested he focus on what has been good about LAPD, his position is, “I’m embarrassed by this,” Moore said. “And I’m embarrassed that we’re back at these tables for these matters, but I’m not naive as to believe that such mistakes don’t occur in organizations today, and nor mine,” he continued.

“That’s a great description, but it’s not satisfying,” Bakewell responded. “It leaves a big hole, I think, in all of our hearts, and certainly in our community. And it’s like, it’s just unacceptable,” he added.