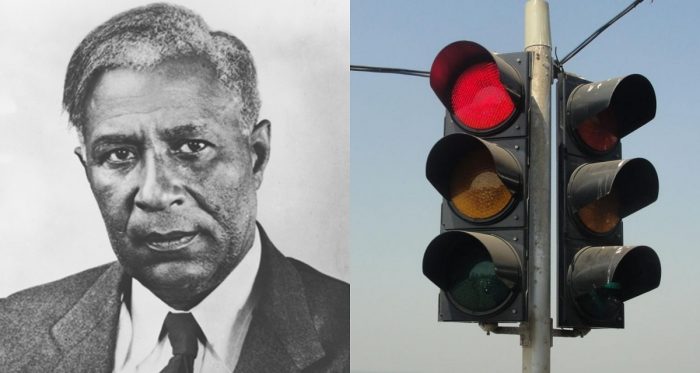 The Traffic Signal
Garrett Augustus Morgan was born on March 4, 1877, in Paris, Kentucky. He was the son of former slaves and spent most of his childhood working on his parents’ farm. Morgan moved to Cincinnati, Ohio in his teens and worked as a tutor among other jobs. In 1895, Morgan moved to Cleveland, Ohio, where he took a position as a sewing-machine repairman. Eventually he accumulated enough money to start his own sewing machine-repair business, which expanded to include a tailoring establishment, a personal-grooming products company, and also a newspaper, the Cleveland Call. In 1920, Morgan had become a wealthy man with dozens of workers in his employ. Morgan was always interested in inventions with his tailoring business, which was equipped with machines that he personally designed. During the early 1900s, he continued to invent new items to improve safety on the streets and in the workplace. Morgan was most famous for patenting the first traffic signal in the United States. After witnessing a crash between a car and a buggy, Morgan was convinced to create the stoplight. On November 20, 1923, Morgan received his patent and the traffic signal was mounted on a T-shaped pole. It had three different types of signals stop, go, and stop in all directions. Morgan eventually patented this device in Canada and Great Britain as well. He sold his patent to General Electric Corporation for $40,000. 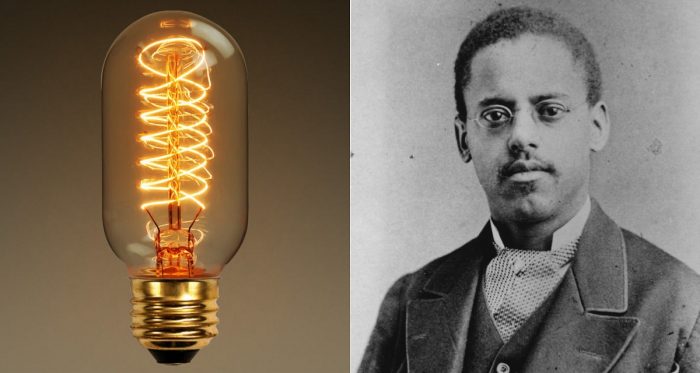 Carbon Filament
Lewis Latimer was born on September 4, 1848, in Chelsea, Massachusetts. His parents were both runaway slaves who migrated to Massachusetts in 1842 from Virginia. His father, George Latimer, was captured by his slave owner, but the story gained attention reaching the Massachusetts Supreme Court. Eventually, George was purchased by abolition supporters who set him free. Lewis served in the United States Navy for the Union during the Civil War. After his discharge, he found work as an office boy at a patent law firm, Crosby and Gould. Latimer had a talent for sketching, which led to him producing patent drawings. In 1874, along with W.C. Brown, Latimer co-invented and improved the train water closet, which was a bathroom compartment for railroad trains. Latimer also sketched designs for Alexander Graham Bell’s device: the telephone. He went on to work for the U.S. Electric Lighting Company owned by Hiram Maxim, which was a rival to Thomas Edison, who invented the electric light bulb. Latimer improved on Edison’s invention by encasing the filament within a cardboard envelope which prevented the carbon from breaking and providing a much longer life to the bulb and hence made the bulbs less expensive and more efficient. This enabled electric lighting to be installed within homes and throughout streets.

Home Security System
Marie Van Brittan was born in 1922 in Jamaica, Queens. She went into nursing and her husband, Albert was an electronics technician. The increase in crime in her neighborhood and her odd hours caused her great concern. Working with her husband, they created a home security system. One issue that bothered Marie, was having to answer the door to identify a visitor. They came up with a plan to attach a motorized camera to a cabinet added to the door. The camera moved up and down to take views through four separate peep holes: top hole for taller individuals and the low hole for smaller individuals. The other peep holes could capture any person between these two heights. A television monitor was placed in their bedroom with a radio-controlled wireless system to feed the images seen at the door back to the monitor. A two-way microphone also permitted conversation with the person at the door. A homeowner could push a button, which would sound an alarm to signal a security firm, a neighborhood watchman, or it could alert a nearby neighbor. There was also a button that would unlock the door remotely so a visitor could enter. The patent application was filed on August 1, 1966 under the names of Marie Van Brittan Brown and Albert L. Brown, both of 151-58 135th Avenue, Jamaica, New York. 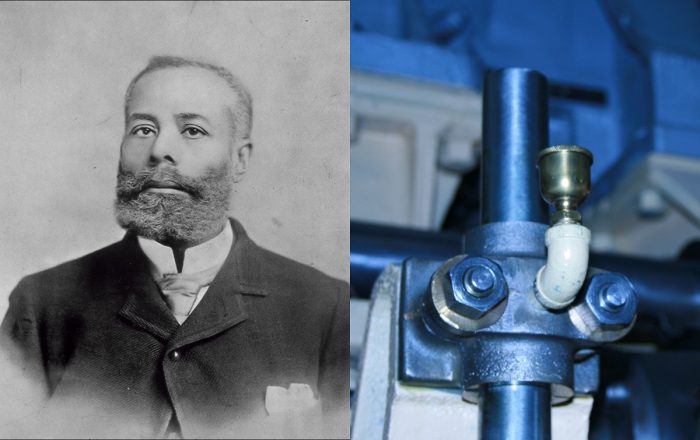 Lubricating Cup
Elijah McCoy was born on May 2, 1844 in Colchester, Ontario. His parents were former slaves from Kentucky, who escaped through the Underground Railroad. George joined the Canadian Army, fighting in the Rebel War and then raised his family as free Canadian citizens on a 160-acre homestead. At an early age, McCoy showed a mechanical interest, often taking items apart and putting them back together again. His parents saved enough money to send him to Edinburgh, Scotland, where he could study mechanical engineering. He finished his studies as a “master mechanic and engineer” and returned to the United States at the end of the Civil War. Unable to find work as an engineer, he took a position as a fireman/oilman on the Michigan Central Railroad. As an oilman, McCoy kept the train lubricated. The trains would have to stop often to apply oil to the axles and bearings. In 1872, he developed a “lubricating cup” that could automatically drip oil when and where needed, which was a huge success. Other inventors had versions of the device but most companies wanted the authentic device, requesting “the Real McCoy.” 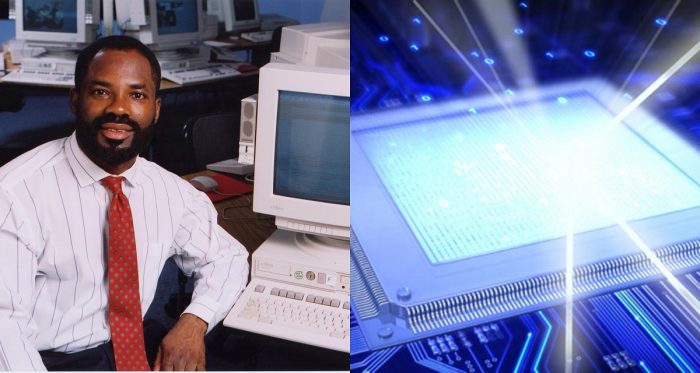 A Faster Computer
Dr. Philip Emeagwali was born in Nigeria and had to drop out of school at the age 14 because his father could not continue pay for school fees. Emeagwali was however, homeschooled by his father and everyday performed mental exercises such as solving 100 math problems in one hour. He studied hard and eventually received a scholarship to Oregon State University when he was 17, where he received a BS in mathematics. Emeagwali also earned three other degrees – a Ph.D. in Scientific computing from the University of Michigan and two Masters degrees from George Washington University. He is noted as a Black inventor and received acclaim based, at least in part, on his study of nature, specifically bees. Using the idea of the honeycomb, he determined computers that emulated this process could be more efficient and powerful. In 1989, using the honeycomb construction, Emeagwali used 65,000 processors to invent the world’s fastest computer, which performs computations at 3.1 billion calculations per second. Emeagwali also has won the Gordon Bell Prize – the Nobel Prize for computation. His computers are currently being used to forecast the weather and to predict the likelihood and effects of future global warming. He has been called the “Bill Gates of Africa.” 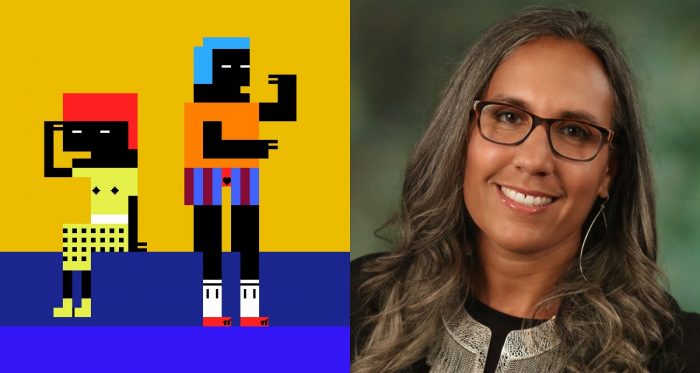 GIFs
Lisa Gelobter was born in 1971 and is a computer scientist, technologist and chief executive. She is a pioneer in the development of video on the internet integrally involved with the advent of several pioneering Internet technologies, including Shockwave, the genesis of animation on the web, and the emergence of online video by way of Brightcove, Joost, and the FeedRoom. The graphics interchange format (GIF) or JIF is credited as being developed by a team of scientist at CompuServe. Gelobter is credited as laying the early groundwork for the program by developing the animation used to produce GIF images. She is a computer science guru, having worked in the digital field for over 20 years, combining strategy, operations and technology. She was the interim head of digital for BET Networks and ran technology, product and business operations. She was also a member of the senior management team for the launch of Hulu. She is also the founder and CEO of tEQuitable. She is now working in the government as the chief digital service officer for the Department of Education.