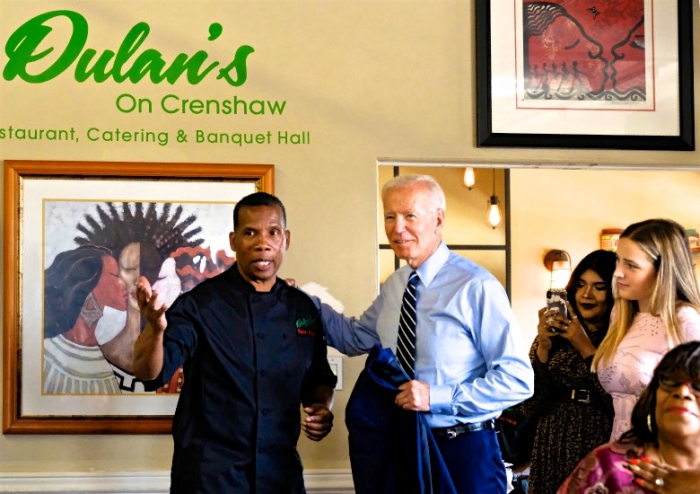 Greg Dulan, left, welcomes Democratic presidential candidate former Vice President Joe Biden and his granddaughter Finnegan Biden, right, to his restaurant Dulan’s soul food on Crenshaw, Thursday, July 18,2019 in Los Angeles. Biden spoke to black pastors and community leaders at Dulan’s on Crenshaw sole food restaurant during a campaign tip to Los Angeles. He said Trump is ripping apart the country’s social fabric and that Democrats must defeat him, regardless of whether Biden is the party’s nominee or not. (AP Photo/Richard Vogel)

At a breakfast gathering held at Dulan’s On Crenshaw soul food restaurant, Biden greeted, chatted and donned an apron and hat to serve meals to more than 60 people who attended the event on iconic Crenshaw Blvd., in South Los Angeles.  He outlined his reasons for running, saying that he wants “to restore the soul of the country,” and he also took time to take a shot at President Donald Trump, referring to Trump’s recent Twitter comments, which disparaged four Democratic congresswomen and stated that they should  “go back and help fix the totally broken and crime-infested places from which they came.”

According to City News Service, Biden said, “It was despicable. To stand and attack those four women in the way he did, talking about them going back home. The racist, basic taunts … when has anything like that happened – the president of the United States saying or doing something like that?”

Other topics that Biden discussed appealed to some of the people who spoke with the Sentinel following the meeting.   Michael Lawson, president of the Los Angeles Urban League, said, “What resonated most with me was his willingness to hear voices of our community regarding the issues that affect our community and to work with all people who have a stake in this country.”

Lawson, who previously served in the Obama/Biden administration as the U.S. Ambassador to the Council of the International Civil Aviation Organization, noted that his view of Biden as a “thoughtful leader,” willing to listen to different opinions and “fight for what he believes is right” was reinforced during the meeting. 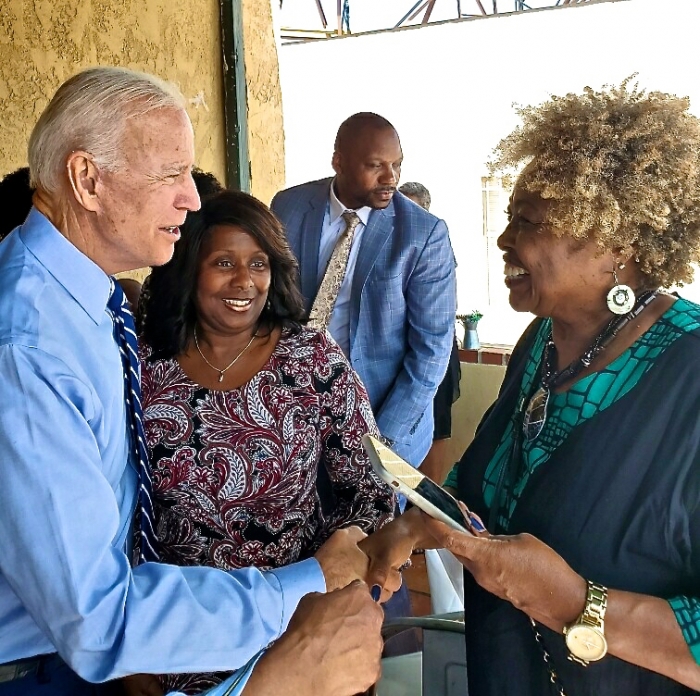 Pastor Edward Anderson of McCarthy Memorial Christian Church said he was encouraged that Biden “uplifts hope instead of deepening division.” Anderson continued, “He made a point to emphasize the need for resiliency in the face of daily oppression and hate, especially for African Americans who have been systematically left out and targeted by bad economic policies, which have doubled- down on displacing Black wealth in America.”

Dolores Bolton, a South L.A. resident representing Brookins-Kirkland Community AME Church, recalled, “Joe Biden remarked that we must defeat Trump, whether he or someone else is the democratic nominee. I personally believe that if Trump is reelected, his ongoing, overt relationship with Vladimir Putin and Kim Jon-un will jeopardize the security of the USA.”

While both Anderson and Bolton felt that it was too early in the campaign to throw their support to Biden, they did agree that they would carefully vet all of the 20 plus Democratic candidates seeking the presidential nomination before making a decision. Two issues that Anderson hopes that candidates will address are criminal justice reform and gentrification.

Anderson insisted that a “real plan” is needed “to create pathways toward home ownership for Black families and communities of color which have been locked out of the market and displaced from our communities.” As for criminal justice reform, he recommended, “Instead of investing in jails, I would like to hear how we will invest, as a nation, in HBCUs, STEM programs and alternatives to incarceration.”

A top concern for Bolton is affordable healthcare and she advised, “Instead of dismantling the Affordable Care Act, I wish there could be a bi-partisan agreement to build upon what is currently in place.” 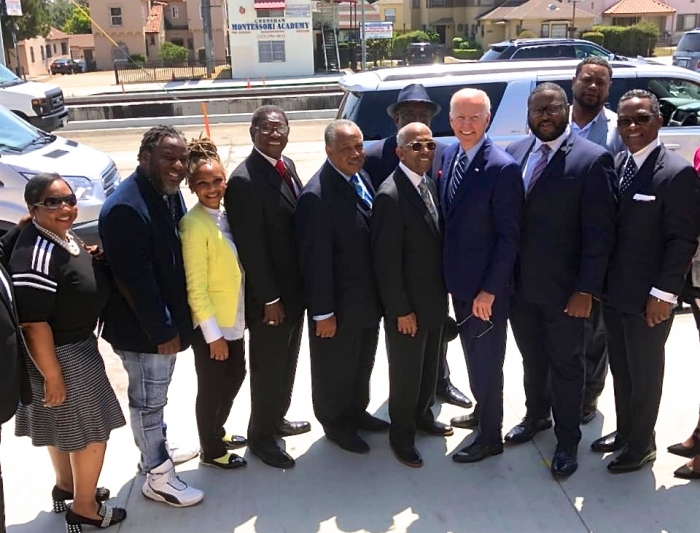 Biden poses with members of the Baptist Ministers Conference of L.A. and Southern California outside Dulan’s on Crenshaw soul food restaurant. (BMC-LA photo)

The Rev. K.W. Tulloss, president of the Baptist Ministers Conference of L.A. and Southern California, was in the audience as well and echoed Bolton’s thoughts about healthcare, calling the issue “a fundamental right that should be given to all, regardless of your economical status.”  Tulloss, who also stated that it was too early in the process to commit to any potential nominee, added that the areas he would like presidential candidates to focus on are “housing for the homeless, the wealth gap, prison reform and reparations.”

“The Baptist Ministers Conference appreciates the invitation to be a part of former Vice President Biden’s visit to South Los Angeles,” said Tulloss. “I believe that it’s our responsibility as community-leaders to hold all candidates accountable and to make sure they have a peoples’ driven agenda for this country.”

Healthcare was also on Lawson’s list of concerns, along with immigration, free quality education, the elimination of student loans, the increase in the minimum wage, job training programs, and the elimination of the mass incarceration of people of color.

Summing up his outlook, Lawson said, “We know what works; we just need the courage to fight the forces that want to ignore the truth, which is that supporting a strong middle class and providing a pathway to that middle class for those who are not yet there, is the best and most effective way of making this country what it aspires to be, “one nation under God, with liberty and justice for all.”