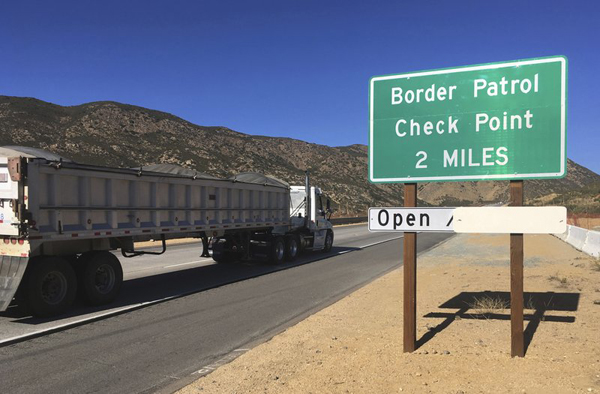 In this Thursday Dec. 14, 2017 photo, a sign warns of the upcoming California Pine Valley checkpoint, on the main route from Arizona to San Diego. California legalizes marijuana for recreational use Jan. 1 but that won’t stop federal agents from seizing small amounts on busy freeways and backcountry highways. Possession will still be prohibited at eight Border Patrol checkpoints in California, a daily demonstration of state and federal law colliding. (AP Photo/Elliot Spagat

California has legalized marijuana for recreational use, but that won’t stop federal agents from seizing the drug — even in tiny amounts — on busy freeways and back country highways.

Marijuana possession still will be prohibited at eight Border Patrol checkpoints in California, a reminder that state and federal laws collide when it comes to pot. The U.S. government classifies marijuana as a controlled substance, like heroin and LSD.

“Prior to Jan. 1, it’s going to be the same after Jan. 1, because nothing changed on our end,” said Ryan Yamasaki, an assistant chief of the Border Patrol’s San Diego sector. “If you’re a federal law enforcement agency, you uphold federal laws.”

The checkpoints, located up to 100 miles (161 kilometers) from Mexico, are considered a final line of defense against immigrants who elude agents at the border. They also have been a trap for U.S. citizens carrying drugs, even tiny bags of marijuana.

About 40 percent of pot seizures at Border Patrol checkpoints from fiscal years 2013 to 2016 were an ounce (28 grams) or less from U.S. citizens, according to a Government Accountability Office report last month. California’s new law allows anyone 21 and over to carry up to an ounce.

The Border Patrol operates 34 permanent checkpoints along the Mexican border and an additional 103 “tactical” stops, typically cones and signs that appear for brief periods.

The clash between state and federal marijuana laws played out on a smaller scale near the Canadian border in Washington after that state legalized marijuana in 2014. California is a far busier route for illegal crossings with many more agents.

State and federal marijuana laws have conflicted since California became the first to legalize marijuana for medical use in 1996. Next week, California will be among seven states and Washington, D.C., with legal recreational pot.

At highway checkpoints, Border Patrol agents look for signs of nervous drivers, like clutching steering wheels and avoiding eye contact and interrupting when passengers are asked to state citizenship. Some panicked drivers make a U-turn when they spot the checkpoint, a dead giveaway.

One recent morning on westbound Interstate 8 about 40 miles (64 kilometers) east of San Diego, an agent standing outside a booth under a large white canopy stopped drivers for a few seconds to ask their citizenship or waved them through after peering inside.

In about an hour, three raised enough suspicion to be ordered aside for a thorough vehicle search.

A dog discovered a marijuana stash about the size of a thumbprint inside the pickup truck of a man with Arizona license plates who was taking his elderly uncle to a hospital appointment. It would have taken up to an hour to process the arrest, so agents released him after seizing the pot and warning it was illegal.

“I didn’t know that, sorry,” the driver said, walking to his truck after waiting on a bench a few minutes while the dog searched.

The animal sniffed something in another car but found nothing in the seats or trunk. The apologetic driver said she smoked marijuana a week earlier, implying the odor lingered.

The Pine Valley checkpoint, amid oak- and chaparral-covered mountains on the main route from Arizona to San Diego, gets busy with drivers returning from weekend getaways but is less traveled than others.

Agents say a checkpoint on Interstate 5 between San Diego and Los Angeles can cause a 4-mile (6.4-kilometer) backup in 90 seconds during peak hours.

The government faces pushback over checkpoints. Some residents complain about delays and trespassers trying to circumvent checkpoints — some even dying from heat and exhaustion. Motorists who consider them a privacy invasion steadfastly refuse to answer questions and post their test encounters on YouTube.

Border Patrol officials insist they are effective. Without them, Vitiello said, smugglers would have open passage to cities like Phoenix and Albuquerque, New Mexico, once past the border.

The U.S. Supreme Court ruled in 1976 that agents can question people at checkpoints even without reason to believe anyone in the vehicle is in the country illegally and don’t need a search warrant.

Michael Chernis, an attorney who represents people charged with marijuana crimes, believes checkpoint seizures are a waste of resources but acknowledged the government is empowered.

“The bottom line is, there’s absolutely no protection against federal interaction when it comes to adult use,” he said. 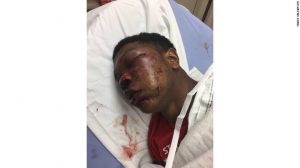 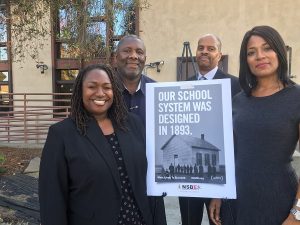 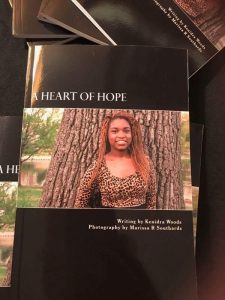 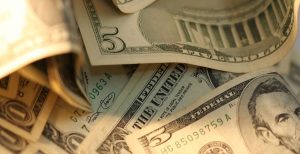